Microsoft gets another Motorola suit transferred from Wisconsin to Washington

Following Microsoft's initial lawsuits in Washington (and its ITC complaint), Motorola had filed (besides an ITC complaint of its own) three suits in Wisconsin and one in Florida. At this point, two of those Wisconsin suits have been transferred to Microsoft's home state of Washington, and the only one remaining in Wisconsin is stayed for the duration of an ITC investigation of the Xbox 360 and may very well also be transferred to Washington whenever it is resumed. The Southern Florida litigation is a separate story. 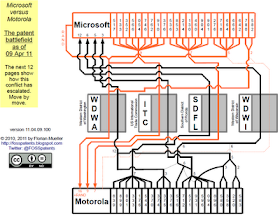 On Scribd you can find a PDF document containing that visualization, 12 more slides that show how the conflict has escalated step by step, and 7 pages of reference lists (all the lawsuits, all the parties, all the patents, all the products). If you are interested in always finding the latest versions of my smartphone patent battlemaps, I recommend that you follow me on Scribd (it has a Twitter-like following system) or at least bookmark my Scribd.com smartphone patents folder. I usually announce updates to that folder on my blog, but you can also go there directly whenever you need such reference material.

If you wish to share this latest Microsoft vs. Motorola visualization via Twitter, you can find it on Twitpic.

In my post on the previous transfer I mentioned that Motorola opposed the transfer of the case that was now transferred and based one of its arguments on the claim that its Android-based smartphones increasingly compete with Microsoft's Xbox game console. The judge did not seem to be impressed by that claim. In her decision she also stated that Motorola's "assertion that Xbox Live is 'implicated' in its claims is too tenuous and undeveloped to support finding any direct competition in relation with this lawsuit."

Competitive relationships can play a role in determining the proper venue for such a lawsuit since patent infringement cases are particularly urgent between drect competitors: an infringer might gain market share at the expense of the right holder. In this particular lawsuit, Motorola attacks the Xbox but can't successfully claim a competitive relationship with Microsoft's game consoles. So the court considered the delay possibly caused by the transfer acceptable, and ordered the transfer.

What we might see at some point is a motion to consolidate some of the Microsoft vs. Motorola lawsuits in Washington.