I previously reported on a preliminary injunction granted by a Dutch court today against the Samsung Galaxy S, Galaxy S II and Ace smartphones. In its official reaction, Samsung underscored that most of Apple's infringement allegations failed at this stage. Let me add -- just to be precise here -- that after the preliminary injunction there will still be a full-blown main proceeding in that case, and even if the judge wasn't convinced of certain patents being valid and infringed ahead of today's decision, it's still possible that Apple successfully enforces those patents in the main proceeding, just like it's also possible for Samsung to defeat the photo gallery patent in the main proceeding.

Even if preliminary, the detailed decision handed today contains some interesting information, some of which is also relevant to some other lawsuits, such as Apple's disputes with Motorola and HTC. In the United States, Apple asserts its slide-to-unlock patent (U.S. Patent No. 7,657,849) against those companies. Apple is suing HTC over it in Delaware, and Motorola in Southern Florida. The Dutch judge who wrote today's decision declared the European counterpart of that patent (EP20080903) obvious (as compared to prior art presented by Samsung) and, therefore, invalid. An invalid patent cannot be infringed, which is why the Dutch decision doesn't even address the infringement question.

I have meanwhile taken a closer look at the judge's reasoning, and while I may have a patent-critical perspective and, as a result, may be particularly likely to consider patents obvious, I believe that Samsung's defense against the slide-to-unlock patent could very well also convince U.S. juries.

The swipe-to-unlock gesture patent application was filed on December 23, 2005. But earlier that year, Neonode, a small and little-known Swedish manufacturer of mobile phones, released its Neonode N1m phone running Windows CE. That phone already had a slide-to-unlock feature as you can see in the following pictures (which Samsung provided to the Dutch court): 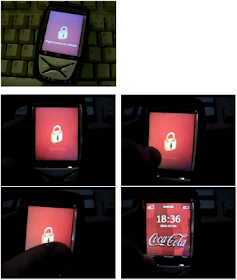 The Dutch judge concluded that the Neonode N1m already implemented the entirety of Apple's claimed invention with only one difference remaining: Apple's slide-to-unlock patent also claims an unlock image that moves along with the finger as the sliding gesture is performed. But that difference didn't convince the judge that Apple was entitled to a patent. He said that the use of an unlock image was "obvious" (in Dutch he said it was "lying on the hand" in terms of "not far to seek").

To underscore the obviousness of the idea of an image moving along with the sliding finger, the decision refers to two examples of user interfaces that described the basic idea that is also behind Apple's unlock image:

Looking at what was already there before Apple's December 2005 patent application, the judge concluded that what Apple's patent claims is "not inventive", in other words, too trivial to be worthy of patent protection.

Apple has already asserted dozens of patents against Android device makers and may assert many more going forward. I don't see Google's proposed acquisition of Motorola Mobility as a solution for Android's IP problems. Those disputes will go on for quite some more time. It's a you-win-some-you-lose-some business. The slide-to-unlock patent appears to be coming out on the losing end, at least in the Netherlands, and for good reasons in my opinion.