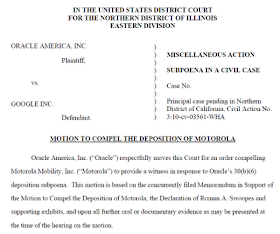 Oracle's "motion to compel the deposition of Motorola [Mobility]", a major Android device maker headquartered in the Chicago area, has the purpose of getting Motorola Mobility (which was served a subpoena by Oracle back in April) to provide the following information:

Oracle submitted a memorandum in support of its motion to compel Motorola's testimony, in which it states (among other things) the following:

"Google has developed the Android operating system and platform for mobile devices, relying heavily on Java technology but without licensing Java intellectual property. Google actively distributes Android and promotes its use by manufacturers of mobile devices and application developers.

Motorola is one such manufacturer of Android devices. Motorola manufactures and sells mobile devices installed with Android software. Examples of Motorola Android devices include the Atrix 4G, Cliq, Cliq 2, Droid 2, Droid Pro, Droid X, Droid, Bravo, Flipside, Citrus, Defy, Charm, Backflip, Devour, and Xoom. Oracle seeks to depose Motorola to confirm that the Android software is installed on Motorola’s Android devices and to determine if any changes have been made to the software. Oracle further seeks to confirm that Motorola uses the accused technology in developing applications for Android."

"[...] Oracle verifies that it has consulted with Motorola by telephone and email, and has made good faith attempts to resolve this matter with Motorola but was unable to do so."

According to one of the documents submitted by Oracle, this is the extent -- considered insufficient by Oracle -- to which Motorola has been forthcoming:

"Motorola's counsel producted [on June 15, 2011] a single document that appeared to be a log of changes that have been made to some undefined set of Motorola’s Android software. The log is the only technical document that Motorola has produced to date.

The log, on its own, did not provide sufficient detail to determine whether the referenced software has been incorporated into any Motorola Android devices.

The log, on its own, did not provide sufficient detail to determine the origin of the referenced software--whether from http://android.git.kernel.org, as described in Oracle's request for production no. 4, or from another source.

The log, on its own, did not provide sufficient detail to identify the changes that Motorola made at the package or file level, as described in Oracle's request for production no. 4."

There are two possible explanations for which Motorola has been stalling. Chances are both apply at the same time:

I believe what Oracle wants to know from Motorola is very reasonable. It's definitely relevant to the dispute and it doesn't seem too burdensome a request. I venture to guess that the Chicago-based court will grant this motion to compel Motorola's testimony.