Late last night, Samsung filed its opposition brief to Apple's motion for a preliminary injunction in the United States. The main part of Samsung's opposition brief has not yet entered the public record because they filed it under seal. I hope to see a redacted version later today. Samsung has also filed extensive declarations with numerous exhibits, and those documents already give an idea of what Samsung's defense strategy against Apple's motion is.

One element of Samsung's defense strategy is interesting enough that I wanted to report on it beforehand. Ever since Apple started to assert the design of the iPad against other manufacturers, many people have been wondering whether there's actually prior art for the general design of the iPad in some futuristic devices shown in sci-fi movies and TV series. And indeed, Samsung's lawyers make this claim now in their defense against Apple's motion for a preliminary injunction.

The following image shows the content of page 2 of an exhibit filed by Samsung with the U.S. District Court for the Northern District of California (click to enlarge): 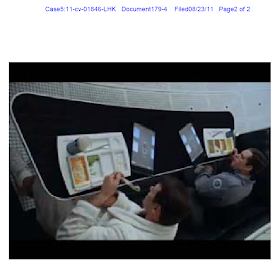 This is how the related declaration explains why this movie picture is valid prior art for a certain iPad-related design patent:

Attached hereto as Exhibit D is a true and correct copy of a still image taken from Stanley Kubrick's 1968 film "2001: A Space Odyssey." In a clip from that film lasting about one minute, two astronauts are eating and at the same time using personal tablet computers. The clip can be downloaded online at http://www.youtube.com/watch?v=JQ8pQVDyaLo. As with the design claimed by the D’889 Patent, the tablet disclosed in the clip has an overall rectangular shape with a dominant display screen, narrow borders, a predominately flat front surface, a flat back surface (which is evident because the tablets are lying flat on the table's surface), and a thin form factor.

I also watched that movie years ago. I wouldn't call myself a fan, but I think it's a good film. Admittedly, I had forgotten about those tablet computers shown in it.

It would be amazing if the court agreed with Samsung that this constitutes prior art for that particular iPad-related design patent. Whether or not Samsung will succeed, the mere fact that they proffer this kind of evidence is remarkable and will be exciting for many fans of movies in general -- and of that movie in particular -- to find out about.