This is the third of three posts today on information gleaned from last night's filings in Oracle v. Google. I previously blogged about Sun's proposal to create a Red Hat-style Android distribution with open source Java and a senior Google engineer's admission that it's likely he copied Oracle-owned Java code into Android. Also, I provided an update on the jury selection dispute (today, the judge gave Google short shrift on that one) and Oracle President Safra Catz' willingness to spend one or two days in court with a peer from Google to talk settlement in front of a Magistrate Judge.

Those were interesting things to report on, but this here is now an even bigger bombshell -- not so much for the Oracle lawsuit as for Google's antitrust worries and the review of its proposed acquisition of Motorola Mobility by regulatory agencies around the globe.

Here's a document from a Google-internal presentation that Judge Alsup (the federal judge presiding over Oracle's patent and copyright infringement lawsuit against Google) didn't want to be withheld from the public (click to enlarge): 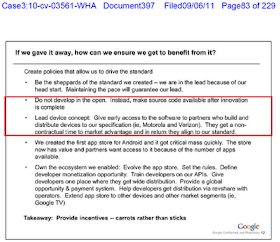 The red box is neither in the original document nor in Oracle's version. It was inserted by me to highlight the part that's most interesting. Here's the text of the highlighted passage:

The first one of the bullet points quoted above is nothing new, especially since the Honeycomb story. But the second one is definitive confirmation of what was previously suspected: the Android source code tree has "private branches" and some OEMs were always more equal than others.

[Update on why this is not about the Nexus]

This post has drawn a lot of interest already and some people claim that this is just in line with the Nexus program, handsets that were built by select OEMs and marketed by Google under its own brand. In the conference calls announcing the acquisition of MMI, Rubin said the Nexus program would continue. Those who say that the "time to market advantage" bullet point means the Nexus are clearly wrong and completely miss the point for several reasons:

Google mentioned "flagship devices" in its Android FAQ, but the argument they make there is that those devices "blaze a trail for the broad OEM community". They made it sound like doing other OEMs a service and didn't admit to the quid pro quo that the slide shown in this post does: "time to market advantage" in exchange for being a Google sock puppet. Whatever they may mean by "align to our standard", it certainly isn't pro-competitive. By not even putting those expectations in a contact, they reserved the right to decide completely arbitrarily who is "align[ed]" and who isn't, and to impose new and different conditions anytime.

So it's the stated commitment to a non-level playing field between device makers that matters here from a commercial and strategic as well as an antitrust point of view. Regulators will also take note of "non contractual" (before "time to market advantage"): it looks like someone clearly didn't want to put in writing the mutual obligations under these special arrangements. Between Google and MMI this wouldn't even be necessary post-acquisition. But between third parties such arrangements are usually contractualized.

A declaration filed by Oracle also contains the following conclusion:

227. I understand that Google participates in the design and build of some device makers' handsets, and provides the final Android build to the OEM.

So it's not like they simply publish the Android codebase on the Internet. According to Oracle, they "participate in the design and build of [...] handsets". Can you imagine that a company like Samsung, HTC, LG or Sony could still trust Google in this regard if Google actually competes with them through a subsidiary?

If Google already intended to give privileged access to Motorola in the past, how can anyone seriously believe that if the acquisition of Motorola Mobility was closed, a wholly owned Google subsidiary named Motorola Mobility would not enjoy key privileges over its competitors?

In a recent post I already explained that many people -- especially many analysts -- see a Fata Motorgana (a portmanteau of "Fata Morgana" and "Motorola"). Neither is the deal going to solve the intellectual property problems Android OEMs have to deal with nor will there be a level playing field.

There are reasons for which some Android device makers (unlike Samsung, which indicated plans to invest more money in other platforms) officially declare that everything's going to be fine. But the document I showed above removes whatever little doubt anyone had left that Google certainly plays favorites with certain Android OEMs, and if the MMI deal goes through, it will play favorites with only one: its own subsidiary, of course.

But early access is only one of the reasons for which Android OEMs must be concerned about the deal. They should be even more worried about Google's business model, which is all about strengthening its advertising-financed online services. It would merely be a natural extension of that business model for Google to undercut other device makers (Android and otherwise) with subsidized devices -- and I mean subsidized not only by network operators but by the device maker itself, given that Google would be the only handset maker without any need to turn a profit on hardware. All that Google wants is to lock as many users as possible into its services and further cement its dominant market position there.

Yesterday's filings by Oracle also talk about that: from an "Android Strategy and Partnerships Overview", apparently a document authored in June 2009 and used internally at Google, there's the following quote:

"Android isn't a new product to monetize; it's a new medium to drive monetization on existing products."

And from the deposition of Android co-founder Richard Miner:

Q. Let me just ask about the last part of what I read which, again, is "The quickest way to defuse this issue is to accelerate the advertising marketplace concept with contractual partnerships with carriers based on rev-share." Did you have an understanding as to whether that's specific to Android or mobile more generally?

I don't know what the Korean antitrust authority found when it raided Google's offices in Seoul yesterday as a result of complaints filed by rival search engines that found themselves excluded from Android devices because of the way Google leverages its intellectual property. What I can certainly say is that Oracle v. Google is a treasure trove of information about Google's Android-related dealings.