Oracle's patent and copyright infringement lawsuit against Google continues to bring very interesting information about Google's Android strategy (and its approach to other companies' intellectual property) to light. This is the first of three blog posts today on information gleaned from last night's filings.

Judge Alsup denied confidential treatment of a number of documents including a January 13, 2006 email by Andy Rubin to Google founder Sergey Brin, on which Google's other founder and now-CEO Larry Page, a person or department abbreviated as LSA, and Google engineering VP Alan Eustace were copied. According to that email, there was a point in the licensing negotiations between Google and Sun at which Sun had a "desire to create a 'distribution' of the Android system [à la] Redhat". Here's the document (click to enlarge): 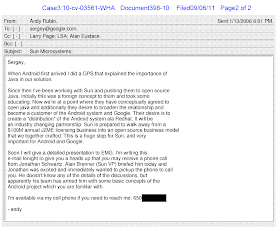 In the first paragraph under "Sergey," Android boss Andy Rubin stressed once again "the importance of Java in [their] solution". One of the reasons for this is interesting even though it's not new or suprising is that this is one of the documents in the evidence file that clearly show Google's founders knew about the need to work out a deal with Sun. Andy Rubin's own respect for third parties' intellectual property rights is also doubtful in light of Apple's allegations that Android infringes a patent that was developed by Rubin's superiors while he worked for Apple (and another email in the Oracle v. Google evidence record, also mentioned in that post). But the responsibility Google's top-level executives have for the Java-related IP situation is increasingly clear.

The above email even makes it a possibility that Rubin himself would have preferred a deal with Sun on open source terms as an alternative to a royalty-bearing license deal but couldn't secure internal approval at Google because they presumably wanted to maximize their control over Android and ensure that parts of Android would always be closed and proprietary in order to have leverage against device makers who may consider supporting search engines and online services other than Google's own offerings as default options for users.

It's unclear what Sun had in mind with a Red Hat-style "distribution". Rubin's email says that this would be "an industry changing partnership", so they had big plans. He says that Sun would "walk away from a $100M annual J2ME licensing business into an open source business model that [they] together crafted". In the same paragraph he describes Sun's role in that deal as that of "a customer of the Android system and Google".

Rubin was very enthusiastic because he wrote that this was going to be "a huge step for Sun, and very important for Android and Google". It appeared (at least to Rubin) that Sun's then-CEO Jonathan Schwartz was also "excited and immediately wanted to pickup the phone to call [Sergey Brin]" even without knowing "any of the details of the discussions".

The fact that Sun asked for $100 million per year is very important. The $100 million figure was previously floating around in connection with a possible damages award. In that context, $100 million didn't look like an annual amount as opposed to the cost of a perpetual license. If Oracle wins this case and obtains an injunction against Google, the cost of a license deal under such circumstances will dwarf those $100 million either way. And all Google execs who were address by (or copied on) emails that talked about the $100 million offer and are now in the public record can't deny their share in the responsibility for having declined it.

That Rubin email is really interesting in several ways, and maybe we'll find out more about why that Android/Java open source deal never materialized. My guess is that this is because Sun wanted to open-source Java only under the GPL, while Google's Android team demanded a "non viral" license (and "non viral" must mean "non-copyleft", or "permissive"). Yesterday's filings also include a deposition transcript in which a Google-internal email string of August 2007 is discussed. In the meantime, Sun had open-sourced Java, but only under the GPL, and a Google employee and member of the Android team wrote that "[t]he whole reason for the GPL is to protect Sun's licensing business", meaning that Sun knew commercial adopters would for the most part need a non-copyleft license and then pay Sun for it. On a copyleft basis, Android would have had to be truly open. And that wasn't compatible with Google's Android strategy, which is all about locking as many users as possible into its advertising-financed services.