Australian injunction could be extended to other Samsung products, HTC, Motorola -- and beyond

After the Federal Court of Australia granted an Apple motion for a preliminary injunction against the Galaxy Tab 10.1 on Thursday, I pointed out immediately that the technical scope of the decision was broad enough to put any new Android product at risk in the Australian market.

This is an important strategic question, and now that the detailed decision (with only a few redactions) has become available, I wanted to follow up and explain in more detail why Apple is -- if it so chooses -- very likely to obtain additional preliminary injunctions against other new Android products ("new" because preliminary injunctions are granted only in urgent cases, not with respect to older products, which can only be shut down in a full-blown proceeding).

The Australian Galaxy Tab 10.1 decision is really worth reading, but it's quite long (approximately 65 pages). In my previous post I quoted a couple of passages from it that prove Apple isn't willing to license all of its patents to Samsung (and other Android device makers who are only competitors, not suppliers like Samsung). Apple intends to keep the iPhone and the iPad unique.

Now let's go into detail on the applicability of the Galaxy Tab 10.1-related preliminary injunction to other new Android-based products. I have drawn up a simple diagram that consists of five concentric circles: 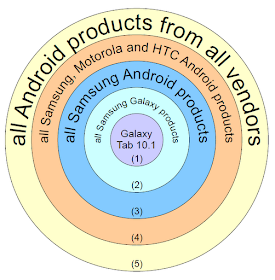 The innermost circle (circle #1) is the nucleus. It contains only the Galaxy Tab 10.1 -- the product the decision formally relates to. The next circle (#2) contains all Samsung Galaxy products (smartphones as well as tablets), since those products are designed to resemble the iPhone and the iPad to the greatest extent possible. Circle #3 contains all Samsung products, adding those product lines that aren't iPhone and iPad look-alikes. Circle #4 adds Motorola Mobility and HTC -- the other two Android device makers with which Apple is in litigation. Finally, circle #5 throws in the rest of the Android ecosystem, which Apple isn't suing yet (those vendors include Acer, Amazon, Barnes&Noble, LG, SonyEricsson, and dozens more).

In my view, Samsung and Google have to fight very hard to prevent that this injunction becomes permanent.

Assuming that the injunction does become permanent and all appeals fail, it will be GAME OVER DOWN UNDER for Android. In that scenario, Apple can easily shut down any Android-based multitouch-capable product.

But we still have five months to go between now and the final hearing. In the meantime, Apple will continue to litigate against Samsung, HTC and Motorola in various countries, and it would make a lot of sense for Apple to capitalize on the favorable situation in Australia in order to gain even more leverage over its rivals.

The practical aspects of additional requests for preliminary injunctions

As I explained before, Apple could seek preliminary injunctions only with respect to new products launched by rivals. Under the headline "The Reality of Apple's Australian Injunction Against Samsung", another blogger argued that "the reach of the injunction is limited" and mentioned the fact that "[t]he Galaxy Tab 7 inch is sold in Australia, but is not included in this injunction". The 7" version is about a year old. There's no way it could have been included in this preliminary injunction or targeted by another one. That window closed many months back. Such an unsuitable example obviously calls into question the analysis at large, especially since the original version of that article had an incorrect list of patents-in-suit and its author linked to a document as the "decision" that was another decision in connection with this dispute, but not the preliminary injunction ruling.

While I'm on the subject of people who disagreed with my warning concerning the extendability of the decision, bear with me for another related digression. One of the craziest things I've seen in a long time was a quote from an Australian patent lawyer who told a media group that "the practical reality is that legal action is costly, and Apple will most likely continue to carefully pick its battles in order to maximise the value it obtains from its IP enforcement activities". Seriously, would Apple, which hoards about $80 billion in cash and has huge profit margins on each device it sells, ever be restricted by legal fee considerations when it has an opportunity to shut down Android devices? I could see that Apple's in-house legal department is so busy it doesn't want to be distracted too much. But there's no question that legal fees won't deter Apple from enforcing its rights. It's probably already spending more money on its Android lawsuits in the U.S. than the fee income of all Australian patent lawyers combined. That cost theory is also belied by the fact that Apple also requested (and obtained) a preliminary injunction against a small German company named JAY-tech.

Back to the real issue. Let's assume that Samsung decides to launch a Galaxy S3 in the near term -- or that, alternatively, HTC launches a new Evo. If Apple filed a request for a preliminary injunction in Australia based on the same patents as the ones asserted against the Galaxy Tab 10.1, the court would in all likelihood assign the new case to the same judge, for the sake of efficiency. Otherwise another judge would have to become acquainted with the patents and technologies at issue.

Even if the judge who presides over the Galaxy Tab 10.1 lawsuit wasn't available, the court wouldn't reach new conclusions on the common aspects of the two preliminary injunction motions as long as there are no new facts on the table. If, for example, additional prior art was shown in a new lawsuit, then the court might arrive at a different conclusion concerning the validity of the challenged patent. But otherwise, there will be no surprises.

An Australian court grants a preliminary injunction based on patent infringement allegations if the patentee (patent holder) succeeds in the following two ways:

I have read the infringement analysis (which includes a patent validity analysis) in detail. There can be no doubt that the asserted patents either read on all Android-based multitouch-capable product or on none at all. Those aren't tablet-specific patents like th design-related right Apple is asserting in Germany. Those are one hardware and one software patent, and both are essential to making capacitive multitouch work.

There are reasons for which Apple decided to attack the Galaxy Tab 10.1 in various markets. It's the first high-profile Galaxy product Apple was able to target at launch time after it decided to seek preliminary injunctions against Samsung around the globe. But in all the countries in which the two companies are suing each other, Apple is also suing Samsung over its Android-based smartphones (in slower, full-blown proceedings).

There are no technical reason for which the Galaxy Tab 10.1 decision wouldn't be applicable to other Android-based tablets and to any Android-based smartphones, in each case irrespectively of the vendor but provided that a device provides capacitive multitouch functionality. Without capacitive multitouch, Android would have a future on only the cheapest so-called feature phones but wouldn't be competitive in the smartphone segment.

Whether the court will uphold its infringement analysis at the end of the full-blown proceeding remains to be seen. The decision acknowledges that some of Samsung's arguments have "force" and may succeed at the final trial, but Apple was able to show a "prima facie case". In other words, both parties showed a sufficient probability of being able to win the final trial, but Australian law favors the right holder who only needs to show a sufficient probability while the alleged infringer must have such convincing arguments for the invalidity or non-infringement of an asserted patent that the probability in favor of the right holder falls below the "sufficient" level. Samsung's arguments weren't that bad, but they weren't good enough to take the likelihood of an Apple victory below the (not too high) threshold Apple had to meet.

Samsung apparently wasn't too convinced of its own arguments: it opposed an expedited trial, which could have taken place in November. Apple was trial-ready -- Samsung was afraid.

The way I understand the decision, I doubt that Samsung can achieve a more favorable outcome unless it presents prior art that it hasn't previously shown to the court. If it just tries to make a stronger case for the same arguments again, I think Apple will win again.

Balance of convenience: decision is undoubtedly applicable to all Android-based Samsung, HTC and Motorola Mobility products, and extendable to other vendors Apple may put on notice

The balance-of-convenience analysis has multiple components. The judge gave them different weight. I'll now explain how the judge put the different elements of the analysis into Apple's, Samsung's or a neutral column, and what the same analysis would look like for new products corresponding to the circles #2, #3, #4 and #5 in my chart further above.

In light of the above, it will be very interesting to see what happens when some of Apple's rivals -- especially the "big three", all of whom Apple is already suing in the U.S. and elsewhere -- try to launch major Android-based products in the near term. Apple would be in a pretty good position to delay or prevent those product launches.

I never doubted that new complaints would require due process: Apple would have to prove its allegations, and defendants would have a chance to tell their version of the story. But the court would be able to proceed much more quickly than the first time that Apple brought these issues before it.