One of the United States' most famous lawyers filed his notice of appearance on Barnes & Noble's behalf in the ITC investigation of Microsoft's patent infringement complaint: David Boies, the chairman of the Boies, Schiller & Flexner law firm, which happens to be one of the two firms representing Oracle against Google.

Here's an excerpt from his notice of appearance, which was filed with the ITC yesterday and entered the public record today: 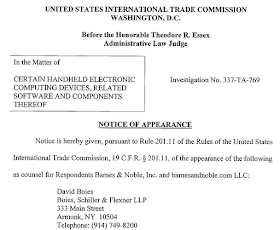 Boies joins a legal team led by Cravath, Swaine & Moore, a law firm that is particularly close to IBM (and vice versa), and Kenyon & Kenyon, a firm focused on intellectual property and especially ITC cases. That team has just recently been complemented by two lawyers from Quinn Emanuel Urquhart & Sullivan, a high-profile litigation firm that also represents Google as a third party in this investigation and the three leading Android device makers (Samsung, HTC and Motorola) against Apple as well as Motorola against Microsoft.

In connection with the technology industry, Boies is particularly well-known for his representation of

Outside of IT his most recent high-profile case is the representation of NBA players in the lockout fight.

Microsoft sued Barnes & Noble in March 2011. The bookseller and Android device maker probably doesn't own patents with which it could effectively countersue Microsoft and has been trying ever since to accuse Microsoft of anticompetitive practices in connection with its efforts to resolve Android's alleged infringement of its patents through license agreements.

I guess the primary reason for which Boies is becoming involved is to give this matter a higher profile, but ultimately Barnes & Noble's allegations will be judged on their merits. The ITC staff (the Office of Unfair Import Investigations, which participates in many ITC investigations as a third party defending the public interest) supported a Microsoft motion to dismiss Barnes & Noble's "patent misuse" defense even without any discovery.

In this context, the OUII (ITC staff) pointed out that patent holders do not have an obligation under patent law to grant a license to anyone: they can always refuse to do so. Microsoft, however, appears to be willing to sign license deals with every Android device maker. Recently it announced that 55% of the Android market is now licensed.

Microsoft recently expressed, in a motion filed with the ITC, a belief that there may be a Google hand in Barnes & Noble's defense. I don't know what led Microsoft to think so, but there are indeed only two possible explanations for the huge amounts of money Barnes & Noble's appears to be spending on legal fees in light of the fact that, in strictly financial terms, it's unlikely to recover those fees through lower license fees anytime soon. Either Barnes & Noble's management pursues this as a matter of principle regardless of whether this makes economic sense, which wouldn't be very business-like and therefore appears less likely, or someone else is contributing funds in order to make this litigation reasonably affordable to the embattled company.

Barnes & Noble has complained about the five patents Microsoft is asserting in the ITC investigation. However, Microsoft is also asserting more than 20 different patents against Motorola Mobility, and only one of those overlaps with the Barnes & Noble case. On Scribd you can find a PDF file that visualizes the history of Microsoft's litigation with Motorola Mobility between October 2010 and August 2011, and includes reference lists of the various cases and the asserted patents (pages 15-21). I haven't had time to update that document in almost four months, but it still serves the purpose of showing the diversity of Microsoft patents that are actually being asserted against Android in court. In less than three weeks, an Administrative Law Judge of the ITC will make his initial determination on seven Microsoft patents asserted against Motorola.

While Barnes & Noble has every right to defend itself vigorously, with or without help from someone with a far greater economic interest in this, I'm concerned that some people may be trying to give a fundamentally good thing -- the concept of patent licensing as a constructive solution to infringement issues that spurs competition and promotes innovation -- a bad name without proposing a viable alternative to licensing.

Barnes & Noble argues that Microsoft lost its right to enforce any of its patents against Android due to "patent misuse". In other words, Barnes & Noble takes the extreme position that it doesn't have to pay a cent regardless of whether if it is ultimately found to make use of technologies Microsoft invented and patented. If Barnes & Noble advocated the abolition of software patents, I could see why, but as long as those rights exist, they must be respected. If patent holders are cooperative and reasonable, there isn't a competition issue in my view.

If there's no case, it doesn't matter how famous someone's lawyers may be. I can't think of a better example than SCO.