I just published what is probably the most detailed account on the World Wide Web so far of Google's five failed attempts to give confidential status to the Lindholm email. Five different decisions by the United States District Court for the Northern District of California were against Google on this matter. The sixth attempt is now before the United States Court of Appeals for the Federal Circuit (CAFC), the federal appellate court for all patent cases.

Bloomberg reported on this appeal and says it relates to the Lindholm email. The fact that there is an appeal is discoverable on PACER (Public Access to Court Electronic Records), but the content of Google's brief is not. However, it published this order on its website, and it says that Google is petitioning the CAFC to order the California-based court "to

Let me show you two screenshots of what PACER reveals (click to enlarge): 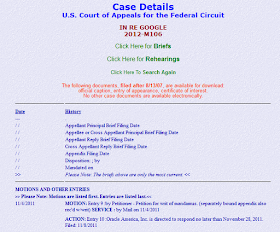 In addition to that, PACER also lists many Google lawyers.

The important pieces of information are that Oracle has until November 28 to respond to Google's petition, and that it's a petition for a writ of mandamus. I've done a fair amount of research today on that type of appeal during an ongoing district court proceeding, and I conclude that Google is highly unlikely to succeed, and will be hard-pressed to persuade the CAFC that it should hear this appeal at all. If the CAFC accepted to hear the appeal, Google might cause a further delay, but it seems more likely that this petition will soon be rejected. (Even if the CAFC heard this petition, it has an expedited briefing schedule for such appeals, so there might not be much of a delay of the trial, if any.)

The one thing that Google is somewhat likely to achieve with this is the further annoyance of Judge Alsup.

I'll explain now why I'm so very skeptical of Google's ability to succeed with this newly-launched attempt #6.

The standard for a writ of mandamus to be granted is very high. Appellate courts are far more willing to overturn a decision as a result of a postjudgment review (certiorari) than to interfere with ongoing proceedings in first-instance courts. Also, as far as privilege and confidentiality issues are concerned, first-instance judges have significant discretion. They are overruled only if they abuse their discretion and make clear mistakes in that process:

The standard is so high because ongoing proceedings shouldn't be interrupted except under the most egregious of circumstances. The high standard is not considered to be unfair because an adverse decision resulting from a judicial error could still be corrected later, even if this may require significant effort (such as a whole new trial in which a privileged document won't be presented). The "general burdensomeness of litigation" is not considered a valid argument in this context.

In order for Google to obtain a writ of mandamus (which would instruct Judge Alsup to grant privilege to all versions of the Lindholm email), it must convince the appellate court that it would otherwise suffer irreparable harm that isn't remediable in other ways. That's already very hard, and it's not enough: Google must also show a clear entitlement. The requirements for that go beyond an error on Judge Alsup's part. There has to be an abuse, as I explained above.

It's hard to see how the CAFC would not believe that Google can always ask for a new trial if all else fails. Google may, in fact, be petitioning for this writ of mandamus only in order to preserve its record with a view to a postjudgment appeal. But even if the CAFC subscribed to a theory of irreparable harm, its judges would still have to conclude that Judge Alsup's decision is not just different from the one they would have considered appropriate but really out of the ballpark of judicial discretion.

It seems that Judge Alsup attaches a lot of importance to a transparency -- much more so than, for example, Judge Koh (the judge presiding over the Apple-Samsung litigation at the same district court) --, but Google would have to prove that this attitude blinded him (who spent most of his professional life in private practice) to the relevance of attorney-client privilege. I wouldn't be surprised if the judges at the CAFC disagreed with some of the details of Judge Alsup's rationale, but he really doesn't seem to be an abuser of power.

For a long time, there used to be the assumption that denial-of-privilege issues are somewhat less unlikely to result in a writ of mandamus than most other matters. But in late 2009, the Supreme Court handed its opinion on Mohawk v. Carpenter, a case that was about a collateral and not a mandamus in a narrow sense. The decision basically said that an adverse ruling on a privilege issue is not immediately appealable, and has been applied by appellate courts to petitions for mandamus relating to attorney-client privilege.

I will try to get access to the briefs. Maybe it will be possible after a while. In the meantime, the district court will continue its work. So we may even see a seventh attempt to claim privilege for the Lindholm email in the event that Google appeals a district court ruling and raises the Lindholm issue at that point. But that presupposes the (very likely but not certain) failure of the, currently ongoing, sixth attempt.