Three weeks ago I reported on Apple having appealed to the Court of Appeals for the Federal Circuit (CAFC) the early December denial of a US-wide preliminary injunction against four Samsung Android products. Here's the header of a related court order (click to enlarge or click here to view the actual document): 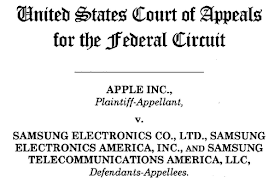 It's far more difficult to obtain documents related to Federal Circuit cases than to research litigation in the district courts, but at least I have an update on the procedural status.

On December 13, 2011, Apple brought a motion to expedite the appeals process. Two more briefings (probably a reply by Samsung and another by Apple) and three days later, the CAFC granted Apple's motion. Accordingly, Apple had to file its opening brief on or before December 22, 2011; Samsung had until January 9, 2012 to file its opposition brief; and Apple had until January 16, 2012 for its reply brief and appendix. In that same order, the court noted that this case would be "scheduled on the March oral argument calendar if practicable".

Apple filed an opening brief on December 22, but six days later it filed a notice of correction. But the court formally rejected both the original brief and the corrected brief yesterday (December 29) and set a new January 12, 2012 deadline for Apple's (second) corrected brief.

I haven't seen a new scheduling order, but since the new deadline for Apple's opening brief is three days after the original deadline for Samsung's response to that one, there must be a delay of (presumably) two or three weeks.

It's totally unclear why the CAFC ordered this do-over. I can just see that those filings occurred, and I can see headlines and sometimes summaries. But none of the publicly available information indicates what was wrong with Apple's first corrected brief. I'm sure the court instructed Apple, so the second corrected brief should be fine, in all likelihood.

In principle, CAFC proceedings are public. For example, Apple filed both a confidential and a redacted non-confidential version of its brief with the court (which just doesn't share it with the public for the time being). In recent months I was quite lucky that different sources (sometimes anonymous ones and sometimes known ones that I protect) provided me with court orders and filings, some of which were good for Apple and some of which were not. I'm always grateful for any such information and encourage those directly or indirectly involved with this CAFC process (or with the CAFC process concerning the Lindholm email, a key piece of evidence in Oracle v. Google) to support my research by sharing relevant, non-confidential (but hard-to-obtain) documents with me.

My opinion on Apple's CAFC appeal is the one I outlined in a previous post. In my view, Judge Lucy Koh of the United States District Court for the Northern District of California did a great job narrowing the scope of protection of Apple's design patents. It appears that the German courts are now also starting to think along those lines. At the same time, I was not at all impressed with Judge Koh's analysis of the harm the parties would suffer from an injunction or continued infringement. I think it's likely that the CAFC will overrule some of her related reasoning because it would set the bar for injunctive relief in this kind of industry far too high, almost impossibly high. Her analysis of the equitable factors also showed a lack of understanding of the relevant markets and their dynamics.

This CAFC process could have major impact not only on Apple v. Samsung but on the industry at large. I'll keep following it to the extent that I have access to information.