On December 19, 2011, the ITC handed down its lenient final ruling on Apple's first complaint against HTC, holding the Taiwanese company's Android devices to infringe only one of Apple's asserted patents and providing for generous transitional periods during which HTC can still ship infringing devices. Apple wouldn't be Apple if it contented itself with an outcome that represents significant progress but is clearly suboptimal, especially since it falls short of the initial determination made by an Administrative Law Judge.

The ITC is a quasi-judicial government agency. Its decisions can be appealed to the Court of Appeals for the Federal Circuit (CAFC), and that's what Apple has done, as reflected by the following header of a court order: 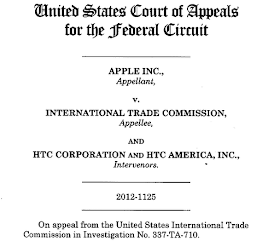 In fact, Apple lodged this appeal back on December 29, 2011, but it's not always easy to find out about CAFC proceedings. I just ran a few searches on Google News and couldn't find any previous report on this appeal. Today I became aware of it because Apple mentioned this appeal yesterday in a filing with the United States District Court for the Northern District of Illinois. In that court, Apple is asserting the '263 "realtime API" patent (for more information on its significance, let me refer you to the infringement claim chart and a blog post on Apple's claim that Android chief Andy Rubin got the inspiration for Android while working at Apple, where his then-bosses made this particular invention) against Motorola. Apple told the Chicago-based court that an Administrative Law Judge agreed with Apple's construction of the term "realtime application programming interface" (and, as a result, held HTC to infringe it) but the Commission, the six-member decision-making body at the top of the ITC, "reversed the ALJ's construction". Motorola argued that the Commission decision should be taken into account by the district court, but Apple states that "[t]he Commission's decision is on appeal to the Federal Circuit and has no preclusive effect in this [District] Court".

Therefore, it's clear that Apple's appeal of the ITC ruling at least aims to broaden the scope of the import ban by including the '263 patent. If Apple succeeded, this would greatly increase the business impact of the import ban.

Apple's appellate brief isn't publicly available yet. Therefore, it's not known whether Apple appeals any other parts of the ITC ruling beyond the finding of no violation with respect to the '263 "realtime API" patent. It is, howver, rather likely that Apple's appeal also relates to one or more of the following issues:

Whatever the scope of Apple's appeal against the ITC may be, I believe Apple has realistic chances of winning a better outcome, but this will take time before the CAFC hands down its decision on this appeal.

Some of the other recent and upcoming smartphone-related ITC decisions may also be appealed. The drop-out rate of patents asserted in ITC complaints is astoundingly high, and I wouldn't be surprised if the Federal Circuit found that the ITC erred in favor of respondents in a few cases.

Apple is no stranger to the Federal Circuit. Also in December, Apple filed an appeal against the denial of a preliminary injunction against Samsung by the United States District Court for the Northern District of California. Appeals against decisions on preliminary injunction motions are usually adjudicated more swiftly than those against ITC rulings.