Apple attacks 15 Samsung products with new German design lawsuits: will they ever settle this part of their dispute?

A spokesman for the Düsseldorf Regional Court confirmed to Bloomberg and German news agency dpa that Apple brought two new design lawsuits against Samsung in Germany: one accusing ten Samsung smartphones (including the Galaxy S II) and another one accusing five Samsung tablet computers.

Unlike last year, Apple apparently didn't ask for preliminary injunctions. At least some of the accused products have been on the market for too long to satisfy the sense-of-urgency requirement anyway. The two cases will go to trial in late August and, respectively, late September 2012, reports dpa.

Update: These are the two smartphone-related design rights Apple is asserting

I have found out which smartphone-related Community designs (EU-wide design rights) Apple is asserting in the complaint targeting 10 Samsung handsets. The Registered Community Design numbers are 000748280-0006 and 000888920-0018. Both were filed in the names of about a dozen inventors including (in both cases) Steve Jobs and Jony Ive. On August 9, 2011, Samsung filed nullity actions seeking to have both Community designs invalidated. 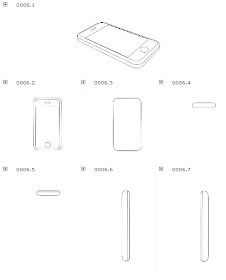 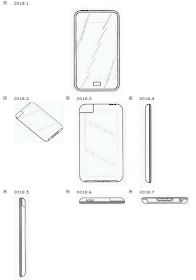 Escalation and the possible end game

About a month ago, Samsung also chose to escalate the German part of the worldwide IP war that is raging between the companies in ten different countries on four continents. Samsung brought additional infringement claims relating to four patents, two of which are standards-related. One of the two patents that are not standards-related protects a method for entering emoticons (smileys) on a mobile device. By the latest count, Samsung is sserting seven technical patents against Apple in Mannheim, where Apple is suing Samsung over six technical patents, in addition to the Düsseldorf actions involving design-related rights.

I believe it will be much harder for the two litigants to settle their disagreements over product design than the ones over technical inventions. For technical patents, the end game could be a cross-license agreement, which would hardly be a simple royalty-for-unrestricted-patent-use kind of deal but more likely a complex arrangement with Samsung paying Apple for the use of some patents, Apple potentially having to pay for some Samsung patents, and, most importantly, Apple reserving some patents exclusively for itself and imposing field-of-use restrictions on the ways in which Samsung will be allowed to implement some other patents. But for those design rights issues, it may not be possible to structure a mutually acceptable settlement. The two companies may just need the courts to clarify the boundaries of Apple's exclusive design-related rights.

I find it hard to imagine how Apple and Samsung can strike an agreement that defines, in a reliable way that courts can apply consistently in the event of a dispute, which characteristics Samsung's products are allowed to have in the future and what Samsung needs to do to make its products more distinguishable from Apple's offerings.

If Samsung promised not to build flat rectangular devices with rounded corners, and not to use the colors black and white, Apple might be fine, but such a wide-ranging exclusion would go way beyond what the courts are going to expect Samsung to do. In two weeks, the Düsseldorf Higher Regional Court will pronounce a decision on Samsung's appeal against the preliminary injunction that banned the original Galaxy Tab 10.1 in Germany, and whether the preliminary injunction is affirmed or lifted, this ruling by an appeals court will certainly clarify the scope of Apple's asserted design right and, more or less directly, indicate what Samsung needs to do to steer clear of infringement. A few days later, the Düsseldorf Regional Court will decide on Apple's request for a preliminary injunction against the (slightly modified) Galaxy Tab 10.1N. If the 10.1N is considered non-infringing (which is reasonably likely to happen), that will be another indication of where Apple's exclusive rights end and Samsung's freedom to compete begins. Of course, Apple will have the same right to have any legal questions clarified by appeals courts.

One of the problems with those design rights is that these products evolve quickly and it's hard to predict what kind of design characteristics are going to be essential in, say, five years. Moving targets also complicate a settlement. Even if the parties philosophically wanted to work this out, they might just not be able to stipulate in an agreement what Samsung will and will not be allowed to do further down the road.

In light of that, Apple's new German lawsuits aren't necessarily a bad thing even for Samsung. Ultimately, the two companies may just need to take the time to present their different views to the courts, including one or even two appeals, in order to see where the judges draw the line. That, in turn, will provide both of them -- and everyone else in their industry -- with guidance.

Design rights issues relating to smartphones and tablet computers also need to take into consideration the technical parameters under which those products are designed and used. Past court rulings on design rights issues in connection with other types of products (even pre-iPhone mobile phones) are of limited use. The courts have to clarify which characteristics are dictated by technical needs (for example, no one should be allowed to have a monopoly on the idea of "flat" devices) and which ones are not.

Legal precedent doesn't have the same role in the German legal system as in Anglo-Saxon Common Law, except for "Leitsätze" ("guidelines") established by the Bundesgerichtshof (Federal Court of Justice). Nevertheless, decisions by appeals courts bear significant weight (especially but not only within the same circuit). In a few years, both Apple and Samsung will be a lot wiser as far as the scope of those smartphone and tablet design rights is concerned. Preliminary injunction motions aren't really useful in that regard, but regular, full-blown litigations, including appeals, can provide such clarification.

In light of the foregoing, I wouldn't characterize Apple's new German design rights lawsuits as hostilities. This is a commercial disagreement, and it needs to be resolved. I like the fact that Apple's new litigation strategy in Germany will lead to useful and necessary clarification, rather than temporary (but strategically useless) disruption.