About four months ago, I said that "[m]edia reports on reduced damages claims [by Oracle against Google] are unfounded". In that blog post, I explained that "[i]f one interprets Google's letter [to the court] correctly, especially in light of all that is known about the previous damages calculation, then there's no reliable indication of a lowering of Oracle's claims. It appears that Oracle just modified its methodology."

None of the reporters I contacted at the time to explain my analysis believed me. Even more recently, I have seen new articles -- and quotes from analysts who talk a lot but never appear to read the relevant court filings -- that made reference to the same old misapprehension of Oracle having "slashed" its claims.

I can now prove in a way everyone will easily understand -- and believe -- that I was right on this one all along. Earlier this week, Oracle and Google refiled various documents from October 2011 (motions in limine and related opposition briefs) because the court thought they were too "scissor-happy" when they originally redacted them. Now look at this passage from a Google motion asking the court to dismiss Oracle's revised damages claims (click on the image to enlarge; emphasis mine): 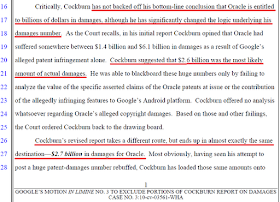 In case you can't read the image well, here are the passages that I underlined:

"[Oracle's damages expert] has not backed off his bottom-line conclusion that Oracle is entitled to billions of dollars in damages, although he has significantly changed the logic underlying his damages number. [...]" Cockburn suggested that $2.6 billion was the most likely amount of actual damages. [...] Cockburn’s revised report takes a different route, but ends up in almost exactly the same destination--$2.7 billion in damages for Oracle."

If you had believed some other people, they claimed that Oracle went down from about $6 billion to about $1 billion. Both numbers were based on a misreading and misinterpretation of (heavily-redacted) court filings. In the image above you can also see Google mention Oracle's alleged claim that it "had suffered somewhere between $1.4 billion and $6.1 billion in damages", but that was just a range, and if there had ever been one single number on the table, it was the figure Oracle's expert considered most likely -- $2.6 billion. And the idea of Oracle having gone down to $1 billion was based on only one part of the revised claims. By comparing two wrong data points, one needs an unrealistic amount of luck to arrive at an accurate conclusion.

There you have it. If you didn't believe me before, trust Google on this: Oracle's most likely damages figure went from $2.6 billion to $2.7 billion.

If anything, that's an increase. One can also say that the difference isn't much. Well, $100 million is a lot, but we're talking about an increase of only about 4%. Still, someone who goes up by any percentage, however small, doesn't "slash" his claims.

Interpreting heavily-redacted documents is tough. There's lots of question marks, and those damages computation theories are non-trivial even if all of the numbers are on the table. Ultimately, Oracle can ask for however much it wants: it's still up the court, and in this case a jury, how much it will get. I also pointed out repeatedly that this is primarily about Oracle seeking an injunction against Android unless Google agrees to bring it into full compliance with the Java standard. Still, the misinformation of Oracle having "slashed" its damages claims sounded like it had stopped believing in its case. And that's not true. This is a complex case and not a slam dunk, but a trial date is now, once again, in sight, and pre-trial decisions on the evidence both parties would like to present or exclude were considerably more favorable to Oracle than to Google.

I went to extreme lengths last year to glean data and draw inferences from the limited amount of information on Oracle's damages claims that the parties' heavily-redacted filings revealed. It was hard work, and there are so many question marks and missing pieces that it's ambitious, if not audacious at times. Admittedly, there were a couple of things I didn't (and simply couldn't) interpret correctly due to redactions, and I had to correct parts of my analysis later on, but making this effort regardless enabled me to be the first (back in June) to figure out that Oracle was seeking an amount in the billions of dollars, and I didn't see anyone else contradict the mainstream fallacy of Oracle having "slashed" its claims later in the year.

No one holds a patent on the truth, but I try very hard to pursue it, trying to get as much information out of court filings as possible, no matter for which company my findings may be good or bad news. There's almost always someone out there who's unhappy about what I say, typically depending on who just won the last battle or suffered the most recent blow. It's been that way for a while, and it will be that way this year, and (hopefully) beyond. Earlier today I was really flattered by IAM (Intellectual Asset Management) magazine's decision to name me to its list of the "IP personalities of 2011", stating that "[my] perspective may not always be comfortable, but it can never be dismissed". I'll try to keep it that way, and I'm glad that this week's filing vindicates my previous analysis of the Oracle-Google damages situation.