The ongoing Oracle v. Google trial continues to bring interesting material to light on a daily basis. In a single document made public by Oracle yesterday, which contains Sun-internal communication about Google in connection with Android and Java, I found several interesting statements on Google's attitude toward copyright and licenses.

On page 4 of the PDF file, Sun co-founder and long-time CEO Scott McNeely wrote to his successor Jonathan Schwartz on March 8, 2007 (you can click to enlarge the image or read the text below the image):

Here's the text again (in case the device on which you're reading this doesn't display the image in a legible resolution):

"The Google thing is really a pain. They are immune to copyright laws, good citizenship, they don[']t share.

In yesterday's testimony, Jonathan Schwartz tried to do as much damage to Oracle's case as he could. But that doesn't mean he always felt good about what Google was and is doing. On March 26, 2008, in correspondence with former MySQL CEO Marten Mickos (who after Sun's $1 billion acquisition of MySQL served as senior vice president of Sun), Schwartz wrote to Mickos, in the context of Google's business strategy of taking without paying, that Google also "take[s] Java for Android, without attribution or contribution."

The email thread that culminated in that statement is found on pages 18 and 19 of the PDF file I linked to above. Since everyone replied at the top (the customary way), I'm now going to show the most interesting parts in chronological order. The thread started on March 25, 2008, with Schwartz writing to ensure that Mickos had seen a CNET article on an IBM investment in EnterpriseDB (Postgres Plus). Like MySQL, Postgres is an open-source database, but under a different license (BSD, not GPL). After Mickos listed other Postgres-related facts and events, Schwartz replied with a story about what a "Google buddy" told him about how Google's senior managers internally communicated their view of different open source licenses (you can click on the image to enlarge or read the text below the image):

...was with my Google buddy over the weekend, and we got to talking abuot licenses. He made some pretty interesting comments about their internal (as communicated by senior mgrs) view of licenses.

They hate GPL, they like Apache, and they love BSD.

Concerning the last part, in recent years I haven't heard anything derogatory from Microsoft about the GPL. The official position appears to be that they "disagree" with it. Anyway, this here is about Google, not Microsoft.

The GPL has a contribute-back mechanism that Google seeks to avoid. That's why it doesn't use the Java code that Oracle/Sun made available under the GPL. Unlike the GPL, the Apache license allows software published under it to be incorporated into proprietary (closed-source) software. And the BSD family of licenses are tantamount to an author of a program saying, "I hereby dedicate this work to the public domain".

Mickos then described Google's business model, including its use of open source software, in the following way (you can click on the image to enlarge or read the text below the image): 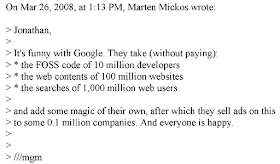 "It's funny with Google. They take (without paying):

and add some magic of their own after which they sell ads on this to some 0.1 million companies. And everyone is happy."

I actually have a somewhat more favorable view. I don't see Google generally "taking" the content of websites by indexing it and generating traffic, except in some cases in which content (such as from vertical search portals) gets integrated into the search engine in a way that Google strengthens its own services at the expense of other companies' websites. I also do respect, to be clear on this, what Google itself does in terms of developing great technologies of its own. I really like many of their services (this blog is hosted by Google's Blogger service), and Android. At the same time, there are intellectual property and antitrust and even sometimes data privacy issues, and I call them out on some of that.

Schwartz had a less balanced perspective than mine. He totally agreed with Mickos and said they all (at Sun) agreed with his assessment, and went on to mention Android and Java (you can click on the image to enlarge or read the text below the image): 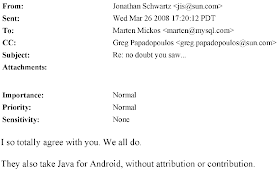 "I so totally agree with you. We all do.

They also take Java for Android, without attribution or contribution."

Finally, with respect to Google's attitude toward copyright and licenses, page 24 of the PDF file mentioned further above shows an email reply that Schwartz sent, on an off-the-record basis, to a New York Times reporter (click o the image to enlarge or read the text below the image): 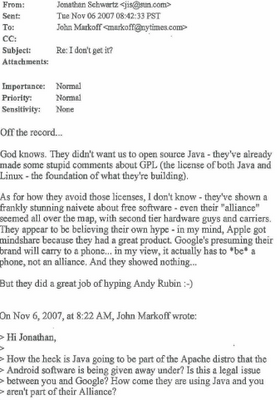 Here's the text again -- but in chronological order, so let's start with the journalist's questions:

how the heck is Java going to be part of the Apache distro that the Android software is being given away under? Is this a legal issue between you and Google? How come they are using Java and you aren't part of their Alliance?"

This clearly shows that the reporter was fully aware of the incompatibility of the GPL and the Apache software license as well as the fact that Sun never allowed the Apache Software Foundation to provide licensed Java APIs under the Apache license. 20 minutes later, Schwartz replied:

God knows. They didn't want us to open source Java - they've already made some stupid comments about the GPL (the license of both Java and Linux - the foundation of what they're building).

As for how they avoid those licenses, I don't know - they've shown a frankly stunning naivete about free software - even their 'alliance' seemed all over the map, with second tier hardware guys and carriers. They appear to be believing their own hype - in my mind, Apple got mindshare because they had a great product. Google's presuming their brand will carry to a phone... in my view, it actually has to *be* a phone, not an alliance. And they showed nothing...

But they did a great job of hyping Andy Rubin :-)"

That answer shows Schwartz underestimated Android at the time. He's right about what worked for Apple, but what Google did with Android also worked (in terms of appealing to application developers).

I think Schwartz was being overly diplomatic by referring to Google's approach to free software as naiveté. Scott McNealy's statement that they are "immune to copyright laws, good citizenship" was a more accurate description. In my opinion, a very consistent disregard for other people's and companies' intellectual property rights, whether it's in connection with Linux, some non-Linux GPL software, Java or most of YouTube's content, can't be attributed to naiveté. There comes a point when someone who's always naive when it benefits him is simply being reckless and possibly arrogant.

Anyway, those emails probably helped Oracle to demonstrate to the jury that Schwartz didn't genuinely believe Google had the right to make use of certain Java-related intellectual property the way it did and continues to do.