On Wednesday, the United States District Court for the Western District of Washington barred Motorola Mobility from seeking the enforcement of a German patent ruling it might win before the court in Seattle has adjudicated Microsoft's FRAND licensing claims. A hearing after which one particularly important claim (breach of contract through excessive demands) will be decided is scheduled for May 7.

Today, Microsoft filed a motion asking the ITC to extend the target date for its ruling on Motorola's claims against the Xbox gaming console by two months since large parts of that case could be taken care of by the FRAND enforcement litigation in the Western District of Washington. As of now (prior to a decision on Microsoft's motion), the target date for an initial determination by an Administrative Law Judge is April 23, 2012 (ten days from today), and the target date for the final ruling is August 23, 2012.

Microsoft's motion points to the temporary restraining order that was granted in order to prevent Motorola from an "end-run" around the forthcoming FRAND-related decisions in Seattle. Microsoft's motion stresses certain parallels between Motorola's ITC complaint, and its German standard-essential patent lawsuits. While a detailed written ruling on the temporary restraining order (TRO) is not yet available at the time of writing this post, an exhibit to Microsoft's ITC motion contains the complete transcript of Judge James L. Robart's public announcement of the TRO ruling: 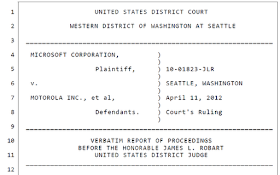 I uploaded the complete exhibit to Scribd. It's quite interesting to read the reasons Judge Robart gave on Wednesday. He held that even the highest legal standard one could possibly apply to the motion under the law was met, and therefore granted the motion.

Getting back to today's motion asking the ITC to postpone its decision, Microsoft says that "MMI's conduct in this investigation parallels its conduct in Germany". Here is my summary of the parallels and differences:

Microsoft's ITC motion denies that there's an infringement of even a single claim asserted by Motorola Mobility but proposes at any rate that the ITC wait in order to benefit fully from the forthcoming Seattle findings.

In recent months, the ITC has been very receptive to public interest concerns. Standard-essential patents raise even greater public interest issues than, for example, the potential impact of an exclusion of a few phones (by one of numerous Android handset makers) on the adoption of, and investment in, 4G networks in the United States. If I had any influence at or over the ITC, I would definitely advocate that the ITC grant import bans based on standard-essential patents only under extraordinary circumstances (if ever). In my view, the owners of standard-essential patents shouldn't be able to win ITC import bans, or even come close to winning them, before they have (at least) made a truly reasonable and non-discriminatory licensing proposal to a defendant.

The ITC refers to its import bans as "exclusion orders". Exclusionary enforcement and standard-essential patents need a divorce in all jurisdictions and venues.