Apple just scored a fairly useful case management victory over Motorola Mobility. A lawsuit originally filed by MMI in November 2010 in the Southern District of Florida and, until recently, scheduled to go to trial later this year has just been consolidated with a second litigation in the same district, and the consolidated case is now scheduled to go to trial in April 2014.

Judge Robert N. Scola, the federal judge presiding over those two Florida cases, entered the related case management order because "the parties [Apple, Motorola, HTC] have shown a complete inability to agree upon anything and it is frustrating the progress of these cases".

Here's the header section of the order (click on the image to enlarge), below which I'll explain the implications of this for the parties' litigation strategies: 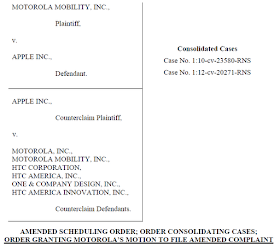 Apple advocated this full consolidation, which the other parties opposed. Unless a motion to sever succeeds, HTC will have to defend itself at the same time -- but HTC is also a winner in a certain way because the court adopted its preferred trial date (later than Apple's proposed trial date of December 2013 and, especially, Motorola's preferred trial date of March 2013 for the original case including only some of the claims of the second action).

Motorola has just lost its only realistic near-term chance to enforce any non-standard-essential U.S. patent against Apple. MMI's Florida lawsuit originally related to six such patents, while it is asserting only standard-essential patents in a case pending in the Northern District of Illinois (scheduled to go to trial next month) and the only Motorola patent a preliminary ITC ruling found Apple to infringe is also a standard-essential (3G-related) one.

In Florida, Motorola now has the worst of both worlds: it has to deal with a somewhat-inflated lawsuit (12 Apple patents, 12 Motorola patents and, at least for now, a third defendant (HTC) on board) that apparently won't be resolved for about two years. The only thing that the court granted Motorola today is that it gets to amend its complaint in order to sue Apple over six more patents (that's why I referred to 12 Motorola patents in the parenthetical in the previous sentence).

This wouldn't have happened if Motorola had simply pursued the original Florida case as it stood. But Motorola wanted to additionally assert its six original patents-in-suit against the iPhone 4S and the iCloud. It was too late in the opinion of the judge who previously presided over this litigation (Judge Ursula Ungaro) and therefore denied a Motorola motion to supplement its infringement contentions. In order to still pursue those allegations at the earliest opportunity, Motorola brought a second lawsuit in that district against Apple in late January. In mid-March, Apple brought counterclaims in that new action to accuse newer Motorola products of infringement of Apple's previously-asserted Florida patents and to assert six more patents. Apple decided to simultaneously sue HTC over the same six patents, though HTC was not previously a party to any MMI-Apple lawsuit.

Apple's strategy has worked out. It cleverly leveraged Motorola's second Florida lawsuit. Motorola wanted too much too soon -- in retrospect, Motorola presumably regrets having brought that second Florida lawsuit instead of waiting until the first case at least had an absolutely firm trial date. While Motorola and HTC face assertions of partly the same Apple patents, they are competitors and, most importantly, they couldn't agree on case management because HTC has a very defensive strategy while Motorola had a vested interest in gettings its November 2010 Florida claims adjudicated sooner rather than later. HTC is also trying to delay the assertion of four other Apple patents in Delaware, where Apple depends on permission from the court to amend its answer to a 2011 HTC lawsuit in order to sue HTC over four more patents (three of which weren't previously asserted in any litigation).

At this stage, Motorola and HTC may be able to agree that HTC's claims should be severed and subsequently transferred to another venue. If that happened, the Florida case might get a new and potentially more ambitious schedule (I guess Motorola could save a few months that way). But Apple has a strong argument here in terms of judicial efficiency. HTC wants those Florida claims to be transferred to Delaware, but there would be no synergy with the claims pending there. If there's any other district with at least some overlaps, that would be the Northern District of California, where Apple is asserting some of the same patents against Samsung, but Apple's first California litigation against Samsung is scheduled to go trial this summer, so it's probably too late to add HTC as a defendant.

Google's plan to gain immediate leverage if and when it closes its acquisition of Motorola Mobility may not work out. So far, that leverage depends almost entirely on FRAND-pledged standard-essential patents as far as ongoing lawsuits are concerned. Earlier today I reported on the findings of an ITC judge according to which Motorola wasn't really interested in good-faith negotiation and FRAND license deals with Microsoft (and, by extension, Apple) when it made its infamous 2.25%-of-price-of-end-product royalty demands.