On Tuesday evening local time, Google brought its pre-announced formal motion for a new trial on API infringement liability (click on the image to enlarge or read the text below the image):

"PLEASE TAKE NOTICE that pursuant to Fed. R. Civ. P. 591 Defendant Google Inc. ('Google') will, and hereby does, respectfully move for a new trial on Oracle’s claim that Google is liable for infringement of Oracle’s copyright on the structure, sequence and organization of the compilable code for the 37 Java API packages. This Motion is based on the attached memorandum of points and authorities as well as the entire record in this matter."

Near-simultaneously, Oracle filed its response to procedural questions the judge had asked.

The parties have yet to comment on each other's position. In particular, Oracle's answer to the court's question focused on the issue of disgorgement of copyright infringer's profits with respect to the nine-line rangeCheck function (which is important mostly because it affects the procedural course of action with a view to the "fair use" question the jury couldn't decide) and devoted little more than one page to the question of how to deal with the jury's failure to reach a verdict on Google's fair use defense. Oracle's response to Google's motion will presumably be far more elaborate. Still, it's now clear which course of action each party prefers: Google insists on a new trial on Question 1 of the copyright trial (so that the infringement question, on which Google lost, gets revisited) while Oracle has a preference for finding a way to make use of the partial jury verdict to the full extent and have the court resolve the "fair use" issue.

This is the relevant part of the jury verdict (click to enlarge): 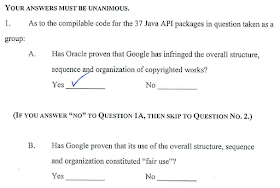 As you can see above (even without enlarging), the jury checked Yes for infringement and left unanswered the second question on "fair use". This has implications for both parties: Oracle needs to prove infringement (which it did) and overcome Google's affirmative defenses (which it has yet to do), while Google needs to succeed on at least one of its affirmative defenses and has the burden of proof on "fair use" (which it has failed to meet thus far).

It's obvious that Oracle desires to keep what it's got, and it's equally obvious that Google has to fight the "infringement" finding with all its might.

While those interests are clear, we need to see some further exchange of arguments in order to assess the full extent of the disagreement between the parties. Thus far they have merely tackled the issue from different angles. There's plenty of room for disagreement, and it's possible that they'll disagree on every single item, but I want to be careful about the evaluation of their original proposals.

Google's motion makes only one proposal:

"Google therefore requests that the Court declare a mistrial, and order a new trial, as to both infringement and fair use as to Oracle's claim that Google is liable for infringement of its copyright on the structure, sequence, and organization of the 37 API packages."

The interesting thing about rangeCheck is that the related infringement finding constitutes a necessity to deal with copyright in Phase Three one way or the other. Oracle doesn't insist on putting the copyright infringer's profits issue before the jury (again, this can be done by the judge himself), but it cites case law that clearly entitles it to a disgorgement. In other words, rangeCheck is a pawn on the procedural chessboard, but the effect it can have on the further course of action is huge no matter how small a nine-line segment of program code is.

Oracle's rangeCheck argument is largely based on the fact that the importance of a piece of stolen program code is not just a matter of its length but also of the technical role it plays ("the function was called 2,600 times just in powering on the device or starting the emulator: 'a pretty big number for the number of calls to this function.'"), and at any rate, the way to avoid dealing with infringer's profits is to rule that something is "de minimis" (which is a total defense to infringement), but if something is not "de minimis" (and the jury decided that rangeCheck indeed is not), the infringer still has the burden of proof for all of the deductions he wants to make from the income he generated with the infringing material. For example, Oracle's filing cites Cream Records, Inc. v. Joseph Schlitz Brewing Co., a case in which "the defendant copied ten notes from a song, 'The Theme From Shaft,' and used those ten notes without permission in a beer commercial".

I guess Oracle is interested in addressing the issue of disgorgement of copyright infringer's profit because even in a scenario in which Judge Alsup's court didn't ultimately find Google to be liable for the identified infringement of those 37 Java APIs, things could change because of an appeal, and then Oracle wants to have a complete record with respect to Google's claimed deductions in order to avoid having to organize a new trial only to deal with the related issues.

So far, Oracle hasn't commented on Google's claim that Questions 1A and 1B are part of one "indivisible" question. If Oracle disagrees on indivisibility, it will have to state its position in its response to Google's motion, just like Google will now have to take a position on Oracle's different proposals, all of which come down to the judge resolving "fair use" without putting the issue before a jury.

Of course, if the judge ruled against copyrightability, a finding against Google's "fair use" defense still wouldn't result in liability for Google. It's unclear in which order the judge would resolve these issues. But he will have to rule on the parties' motions for JMOL.

In my opinion, there's no reason why Judge Alsup couldn't decide on "fair use", and I can't see any other outcome than a ruling that Android's hijacking of Java does not constitute "fair use". As I said before, both parties asked for JMOL on this one at different times (Google lost once but can try again). The facts are pretty clear -- even if viewed in the light most favorable to Google, they fall far short of what constitutes fair use even according to the cases Google itself cites.