While Motorola won a preliminary ITC ruling in late April finding Microsoft's Xbox to infringe four patents (including three FRAND-pledged standard-essential ones), the public redacted version of Administrative Law Judge Shaw's initial determination (ID), which entered the public record toward the end of last week, contains several FRAND-related conclusions that add to Motorola's FRAND-related worries. In the United States, Motorola has to defend itself against a Microsoft lawsuit to enforce FRAND licensing obligations, and the European Union's top antitrust regulator is formally investigating Motorola's use of standard-essential patents against Apple and Microsoft.

Judge Shaw's April 23, 2012 notice of his ID merely stated that "Respondent [i.e., Microsoft] has not prevailed on any equitable or [F]RAND defense". But the full (redacted) text of the initial determination shows that Judge Shaw's legal conclusion, which the Commission (the six-member decision-making body at the top of the ITC) can review and modify, doesn't mean that he considered Motorola's royalty demands and overall conduct to be above board.

In fact, Judge Shaw condemned Motorola's behavior in no uncertain terms. Here are some quotes (I'll show the context of those quotes, and excerpts from the original document, further below):

Judge Shaw apparently didn't agree with Microsoft, only from a legal point of view, that this assessment of the facts would, in and of itself, stand in the way of a potential ITC import ban, especially since he said there's no precedent at the ITC for denying an import ban due to existing FRAND licensing obligations. The legal discussion continues. The FRAND-related evidentiary record appears to be very favorable to Microsoft, and the Commission has many ways to deny, limit or delay an import ban. If all else fails, it can rely on the public interest in standards (it has already made a call for input from stakeholders).

Microsoft can also point to this public redacted ID in other contexts, be it the Seattle FRAND litigation, its appeal against a (presently unenforceable) German injunction, or the EU antitrust investigation. Also, this may help Apple.

In the remainder of this post, I'll show and explain the most interesting parts of Judge Shaw's ID. All of those passages are found in a section that addresses one of three factors relevant to an equitable estoppel defense (misleading statements, reliance, material prejudice). Microsoft prevailed on two of the three equitable estoppel factors -- Judge Shaw just wasn't convinced of the "reliance" part.

Misleading FRAND assurances to the SSOs and the public

"The offers made to Microsoft show that although Motorola assured the SSOs and the public that it would provide reasonable and non-discriminatory licenses for the patents essential to certain standards, those communications were misleading. This fact is only made more apparent by Motorola's dealings with [       ]. While Motorola's offers need not be the same as the terms that might eventually be contained in a [F]RAND license, Motorola admits that it is bound to negotiate in good faith."

The first sentence basically says that Motorola never truly intended to grant licenses on FRAND terms. In the second sentence, the missing company name is most likely Apple (another company against which Motorola is seeking an ITC import ban based on standard-essential patents). The third sentence is consistent with Judge Robart's approach in Seattle: even if an initial offer isn't FRAND-compliant, it must not be, as Motorola itself called it at a Seattle hearing, "blatantly unreasonable". Dutch courts apply a similar standard.

The finding that Motorola's FRAND pledges were misleading is also stated here:

I believe that the redacted reference to one or more companies also includes Apple (or relates exclusively to Apple).

2.25% royalty rate was an unacceptable demand

Motorola's royalty demand of 2.25% based on the price of the end product (such as an entire PC running Windows), which would correspond, in a conservative estimate, to an annual obligation for Microsoft to pay $4 billion to Motorola, is well-documented. In the Seattle FRAND case, Microsoft presented two charts that put that demand into perspective. Contrary to media reports, Motorola didn't dispute the number (it merely called it misleading), and told Judge Robart that it considers its demand "reasonable [F]RAND".

At the ITC, Judge Shaw clearly disagrees with Motorola's claim that 2.25% of the price of the end product represents an acceptable demand:

The first sentence is a powerful statement: the percentage, especially in connection with the royalty base, "could not possibly have been accepted by Microsoft".

The second sentence refers to other license deals Motorola pointed to in defense of the 2.25% figure, saying those had the same or a similar rate. The number of those license deals is redacted, and what's also redacted is what else "was included in that [license] grant" -- presumably many or all of Motorola's non-standard-essential patents.

This passage furthermore points out the unacceptability of Motorola's demand: 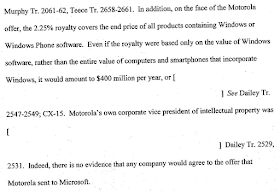 The first sentence points out that Motorola's October 2010 letters indeed related to the "end price of all products" running Windows. There can be no doubt about that. Motorola's letter even stated explicitly that the percentage was not based on the price of Windows itself.

While there's no lack of clarity about that, the second sentence then talks, totally hypothetically, about a scenario in which the rate would apply only to the price of Windows itself. The totally hypothetical nature of that sentence is underscored by the use of the word "were" instead of "was".

Motorola's primary defense in the Seattle FRAND action is that it says the initial demand was only an invitation to negotiate, and the outcome of a negotiation could still have been a FRAND deal. At the ITC, Judge Shaw sees no indication that the outcome of such negotiations would have been likely to have been FRAND. Instead, he concludes from the evidence that Motorola wasn't interested in a FRAND outcome: 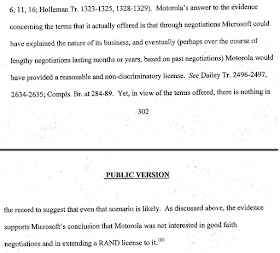 "Motorola's answer to the evidence concerning the terms that it actually offered is that through negotiations Microsoft could have explained the nature of its business, and eventually (perhaps over the course of lengthy negotiations lasting months or years, based on past negotiations) Motorola would have provided a reasonable and non-discriminatory license. See daily Tr[anscript] 2496-297, 2634-2635; Compl[ainant's Brief] at 284-89. Yet, in view of the terms offered, there is nothing in the record to suggest that even that scenario is likely. As discussed above, the evidence supports Microsoft's conclusion that Motorola was not interested in good faith negotiations and in extending a [F]RAND license to it."

In other words, Motorola's offer wasn't genuine. It was prohibitive. The whole purpose was to seek injunctive relief.

The problem is obvious -- how can it be solved?

I think Judge Shaw has accurately identified the problem. He just didn't present a legal solution in his ID. I think the ITC as an institution should look at this and come up with ways to prevent the abuse of standard-essential patents through ITC complaints.

The situation is similar in Germany. I attended a Mannheim trial (over two H.264 patents asserted by MMI subsidiary General Instrument Corp. against Microsoft) in February, and Judge Dr. Kircher didn't appear to agree with Motorola in the slightest that 2.25% was a rasonable demand, or anywhere near it. He appeared somewhat more sympathetic to Microsoft's counterproposal, though he ultimately didn't consider it sufficient and granted an injunction.

I believe that courts and trade agencies should really draw the necessary conclusion from the kind of FRAND abuse they see all the time now. Ultimately, the law must be applied in a way that the abusers of standard-essential patents can't get, in the form of injunctions and import bans, all the leverage they need to force settlements on their terms. Judge Robart in Seattle attached a lot of importance to this consideration. He talked about the practical implications of injunctive relief. The job that the ITC or the judges in Germany -- and in many other places -- really have to do is to develop legal theories that deny abusers this kind of decisive leverage.

At the same time, it's important that antitrust authorities, who are generally responsible for industry standards from the outset (the standard-setting process), also use the means at their disposal to curb abuse.