As expected, an 11th-hour conversation between the CEOs of Apple and Samsung was no more successful in bringing about a settlement than various prior attempts. Judge Koh had urged -- almost implored -- the parties to make one last effort to settle before jury deliberations, but there is too much at stake. The judge argued that both parties have now proven in court that they have intellectual property -- but that was never doubted by anybody. The question is how strong it is when push comes to shove. And the only way to find out is to let push come to shove.

Judge Koh may dread the notion but we'll probably see more Apple v. Samsung trials even in her court before all is said and done. Absent a settlement, this is just the beginning. There are two more sets of infringement claims waiting to be adjudicated by Judge Koh's court: the ones that the parties withdrew without prejudice (i.e., with the right to reassert) from the current case and the ones at issue in the second California lawsuit between these companies, which started in February. Needless to say, California is but one of numerous venues in which they are litigating.

Not only is a comprehensive settlement not in sight at this stage but the parties have also been unable to agree, despite soft pressure from the court, on some further streamlining ahead of the jury deliberations. Judge Koh has meanwhile filed her latest jury verdict form (it appears final but minor modifications may still happen) and her final set of jury instructions (she told the parties not to re-raise objections but to comment only on typographical errors).

Late on Monday, the parties filed a stipulation to dismiss claims without prejudice, but that stipulation is old news: it merely formalizes what the parties previously proposed. In early July, both parties made proposals to drop various claims, and in late July, Samsung dropped another patent. The latest stipulation just fleshes out the details (such as a dismissal of counterclaims to the extent they correspond to a given claim).

Samsung's lawyer won something else that is likely to help their client: the 20-page verdict form asks pretty much all of the roughly 700 questions Samsung previously proposed to put before the jury, while Apple had advocated a more aggregated format. Judge Koh adopted the substance of Samsung's proposal and merely optimized its visual presentation with a tabular format. Samsung, of course, would have preferred to give the jury a form spanning twice as many pages. But the one Judge Koh created is going to be confusing enough at any rate. Here's one of the crossword-puzzle-like tables the jury will have to fill out (click on the image to enlarge): 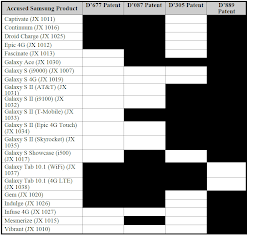 This degree of granularity is hard to manage, but Judge Koh apparently didn't want to take any chances and adopt Apple's aggregated format because it might have been too easy for Samsung to convince an appeals court that liability issues and damages really must be addressed on a product-by-product, defendant-by-defendant basis. Jury members who look at this may worry whether they'll have to spend months in court, but in practical terms, the court won't wait forever and at some point it might accept a partial verdict. Any questions on which the jury is hung would be left unanswered for the time being, which would be more likely to benefit Samsung (which is primarily on the defensive here, even though some of its own offensive claims might also be affected) than Apple.

The complexity and volume of the jury verdict form could be avoided if Apple didn't seek monetary damages relating to dozens of Samsung products. If Apple focused on injunctive relief, it would just need an exemplary accused product per infringement pattern -- and if it had only asked for injunctive relief from the beginning, there wouldn't even have to be a jury trial at all. But going only for injunctions is an ambitious strategy in the United States, where injunctive relief is denied even in many cases in which the infringement of a valid intellectual property right is proven.

At an hourly rate below minimum wage, the jury is now going to have to dig its way through this 700-question mess.