Samsung figured out how the jury arrived at its damages figures (except for the Galaxy Tab 10.1)

On August 24, after only three days of deliberations, a jury awarded Apple damages from Samsung amounting to $1.049 billion. As I reported yesterday, Apple is seeking a substantial increase of that amount.

The jury had to fill out over 700 boxes on the verdict form. Most of them were Yes/No fields, but the jury also had to provide a total damages figure for each product. While the court was still discussing the structure of the verdict form with counsel, Samsung actually wanted the jury to specify how much of each award was based on which damages theory. That did not happen, but Samsung has been able to reverse-engineer the damages part of the verdict for all products but one (the Galaxy Tab 10.1) because it identified mathematical correlations that cannot be coincidental.

I have extracted the related tables from a Samsung document so everyone who is curious about how the jury arrived at its damages numbers can quickly find out here.

There are different correlations for different sets of products. The first and largest group are products that were found to infringe one or more Apple design patents but no Apple trade dress. Most of those products were also found to infringe at least one of the three asserted software patents, but apparently the jury didn't take any differences in software patent infringement into consideration when determining damages for this group of products. For these products, the jury simply adopted 40% of the disgorgement of profits that Apple had asked for (click on the image to enlarge): 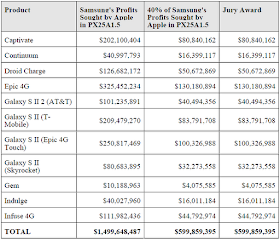 For five products that were found to infringe one or more design patent and to dilute an Apple trade dress, the jury added 100% of the amount of lost profits claimed by Apple to the same 40% the disgorgement demand to products that it applied to products infringing design patents but no trade dress. The related table is interrupted by a page break in Samsung's original filing. I combined the two parts below (click on the image to enlarge): 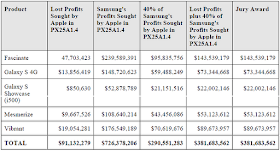 While a combination of one party's lost profits with a percentage of the other party's unlawful profits is questionable, it's understandable that the jury felt it should award a larger amount of money where an additional category of intellectual property rights was found infringed.

When it comes to those products that were found to infringe only Apple's software patents (but no design patents or trade dress), the jury becomes inconsistent and in one case even uses a methodology that is contrary to patent damages law.

On the following handful of products found to infringe only software patents, the jury awarded Apple precisely half of the royalties it demanded (click on the image to enlarge):

So far, so good. But the Galaxy Prevail falls in the same category, and the jury then awarded 40% of what Apple claimed were Samsung's profits made with that device (click on the image to enlarge):

This means the jury applied its methodology for design-patents-only damages to a software-patents-only infringement issue. If that inconsistency was within the jury's discretion, it would be difficult to challenge, but the real problem is that a disgorgement of infringer's profits is not allowed by U.S. patent damages law with respect to utility (technical) patents. This option is available in connection with design patents (35 U.S.C. § 289).

The related jury award of $57.9 million dollars will have to be adjusted. If the same methodology (50% of Apple's royalty demand) as for the other software-patents-only items was applied, we'd be talking about a few million dollars, not tens of millions. And I guess this is one adjustment that Judge Koh will very likely make. This one adjustment alone would be enough to take the damages award (prior to any of the enhancements requested by Apple) below the psychologically important billion-dollar threshold, and Samsung might then try to argue that this contrary-to-law approach by the jury to the damages figure for one of two dozen products dictates a retrial on all damages numbers.

What remains a mystery is how the jury arrived at its award of $833,076 in damages for the Galaxy Tab 10.1 (WiFi). Samsung couldn't identify any mathematical correlation that explains this number. Also, the number apparently exceeds what Apple demanded ($604,391 according to Samsung's representation). Should Apple prevail on its Rule 50 motion with respect to the tablet design patent, the Galaxy Tab 10.1 damages figure will have to be redetermined from scratch.

In a post later today or tomorrow I will provide a high-level assessment of the chances of the parties' numerous Rule 50 ("overrule-the-jury") requests.