Samsung tells U.S. court it will soon attack the iPhone 5 with eight patents for a starter

In a case management statement filed late on Wednesday with the United States District Court for the Northern District of California, Samsung expressed its belief "the iPhone 5 will infringe [the eight patents that Samsung is already asserting in a California lawsuit against Apple, two of which have been declared standard-essential] in the same way as the other accused iPhone models", and that it "plans to file a motion to amend its infringement contentions to address the iPhone 5 as soon as it has had a reasonable opportunity to analyze the device".

Here's the relevant passage (click on the image to enlarge or read the text below the image): 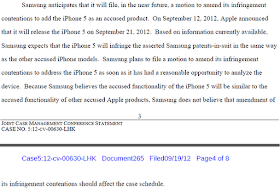 The filing was jointly made by Apple and Samsung in their second California litigation, which started this year and is currently scheduled to go to trial in March 2014.

Last year, Samsung sought preliminary injunctions against Apple in other jurisdictions (including France, Italy and the Netherlands), but it has not yet done so in the United States. After its recent trial loss it may want to show that it keeps fighting back.

Apple has also continued to add new products to the list of devices accused in that lawsuit. Three weeks ago, Apple added the Galaxy S III, Note and Note 10.1. It appears that Apple has already served its detailed infringement contentions concerning the S III and Note, but still needs to do so for the Note 10.1. Apple furthermore notes that "the Android 4.1 Jelly Bean operating system" will become one of the accused technologies. That is interesting in light of Google's recent statement on the jury verdict in the first Apple v. Samsung litigation, where Google claimed that "[m]ost of these [patent claims] don't relate to the core Android operating system". I commented on the "core Android" question in a recent post.

Judge Koh will hold a hearing on Wednesday (September 26) to discuss the further management of the second Apple v. Samsung lawsuit she is presiding over. In the meantime, Apple and Samsung will file various post-trial motions in the first one. According to the Korea Times, Apple will seek triple damages: $3 billion. That amount would exceed the total cost of the Curiosity Rover, while the jury's damages award fell short of the cost of reconstructing the Golden Gate Bridge.