Wholly-owned Google subsidiary Motorola Mobility has narrowed the remanded ITC investigation of its complaint against Microsoft's Xbox gaming console by 50%. Motoorla dropped two WiFi-related patents from the case, leaving only two H.264 (video codec) patents. Motorola's motion for partial termination, which is not based on any kind of settlement but which Microsoft obviously doesn't oppose, was filed yesterday and just entered the public record. Here's the header section of the motion (click on the image to enlarge or read the text below the image): 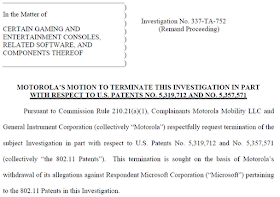 In the Matter of CERTAIN GAMING AND ENTERTAINMENT CONSOLES, RELATED SOFTWARE, AND COMPONENTS THEREOF

Pursuant to Commission Rule 210.21(a)(1), Complainants Motorola Mobility LLC and General Instrument Corporation (collectively "Motorola") respectfully request termination of the subject Investigation in part with respect to U.S. Patents No. 5,319,712 and No. 5,357,571 (collectively "the 802.11 Patents"). This termination is sought on the basis of Motorola's withdrawal of its allegations against Respondent Microsoft Corporation ("Microsoft") pertaining to the 802.11 Patents in this Investigation.

In late June, the ITC's top-level decision-makers remanded this investigation, which was instituted based on a complaint Motorola brought in November 2010, to an Administrative Law Judge. The remand notice provided certain instructions that suggested that Google was rather unlikely to get leverage out of this investigation. One of the issues relates to method claims -- I just mentioned that topic yesterday in connection with Microsoft's appeal of its own ITC case against Motorola. The asserted claims from the two IEEE 802.11 (WiFi, or WLAN) patents that Motorola has just withdrawn were method claims. One of the H.264 patents remaining in the investigation faces the same issue.

Microsoft says it's entitled to a reciprocal H.264 patent license from Motorola Mobility's parent company due to an MPEG LA-Google license agreement. That contract issue could, all by itself, take care of the remaining two patents in the investigation.

The target date for the remanded investigation is July 23, 2012. A hearing will take place on December 5 and 6, and a remand initial determination (a preliminary ruling by a judge) is scheduled for March 22, 2013. Motorola's partial withdrawal reduces the risk of further delay. In fact, if a Microsoft motion for summary judgment concerning Google's grant-back obligation vis-à-vis all MPEG LA AVC/H.264 patent pool contributors succeeds, the case will just go away, possibly even prior to the upcoming evidentiary hearing.

Earlier this month, Google's Motorola Mobility withdrew its entire second ITC complaint against Apple. Just like in the Microsoft case, the motion clarified that no agreement existed between the parties. That particular termination has meanwhile been approved by an Administrative Law Judge and the Commission, the six-member decision-making body at the top of the ITC. This week's motion in the Xbox case will likely also be approved in the short term.

Next month, a Microsoft contract lawsuit to hold Motorola Mobility to its FRAND licensing promise will take place in Seattle. The parties filed a joint proposal for a pretrial order, in which they laid out their positions on that case (they unsurprisingly disagree on key issues).