Shortly before midnight local time on Wednesday, Apple has filed a response to a Samsung motion to amend its infringement contentions in the second California litigation between the two, in which different patents and certain newer products are at issue than in the first California case that went to trial in the summer.

Apple has attached to its responsive brief the original and the amended versions of Samsung's original infringement contentions based on U.S. Patent No. 5,579,239 on a "remote video transmission system", a patent that was not filed by Samsung but just acquired in October 2011 from a group of U.S. inventors who lived in Oklahoma when they applied for this patent almost 19 years ago. The timing suggests that Samsung bought this patent in response to Apple's infringement actions, which started about six months prior to this purchase.

It appears highly unlikely to me that Samsung will win and get to enforce an injunction against Apple over this patent. Their second California litigation currently has a March 2014 trial date. The court won't grant an injunction prior to clarifying liability, which requires a trial because Samsung is also seeking damages.

Samsung already asserted the '239 patent in its counterclaims in the second Calfornia action. That second California lawsuit started in February 2012, and Samsung brought its counterclaims in April 2012. But Samsung did not specifically accuse the FaceTime videoconferencing app of infringement. I have run a full-text search for FaceTime over the original infringement contentions, and the result is negative. But the new infringement contentions mention FaceTime a lot and even show screenshots (from Apple's website). For example, in connection with the "host computer" claim limitation, Samsung alleges that "[a]dditionally [to iTunes], Facetime allows the iPhone 5 to act as a host computer". Another example: in the context of "means for exchanging data with said host unit", Samsung's lawyers write that "Apple's software, such as Quicktime and Facetime, works in conjunction with that computer interface(s) and the circuit to allow a host unit to receive data from an iPhone 5 and transmit it to playback unit for playback unit." And yet another example (there would be more, but I'll focus on a few) is that Samsung's document says the use of FaceTime on the iPhone enables the transmission of video calls over cellular frequencies (click on the image to enlarge): 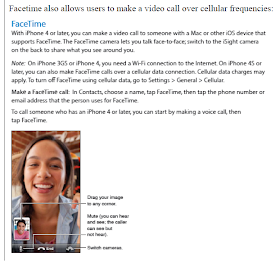 To explain the procedural background of this, Apple's response is not an outright opposition to Samsung's motion. About a month ago, Magistrate Judge Paul S. Grewal warned Apple not to waste everyone's time and resources by opposing other infringement allegations that Samsung may still bring at this stage under the Northern District of California's permissive rules governing such amendments. Apple's response shows that the company heeds Judge Grewal's guidance, but its non-opposition is conditioned upon Samsung likewise refraining from opposing Apple's most recent proposed additions to the lawsuit, which include the Galaxy Note II and a handful of other recently-launched Samsung gadgets. Since there is no stipulation in place between the parties concerning mutual non-opposition, Apple's filing discusses, as a matter of precaution, reasons for which the court might find that Samsung has failed to show good cause for its latest amendments. In this context, Apple writes the following about the FaceTime accusation:

"For U.S. Patent No. 5,579,239 (''239 patent'), Samsung has expanded its original '239 patent infringement contentions to identify the FaceTime application ('app') as a 'means for capturing, digitizing, and compressing” and a 'means for exchanging data with the host unit.' [...] Samsung has also expanded its infringement contentions for 'means for storing' in the 'mobile remote unit' to identify RAM in addition to the NAND memory. [...] FaceTime and RAM were available in the Apple devices accused in Samsung's original contentions, and therefore could have been accused in June 2012. But Samsung chose not to, and has yet to identify any good cause for not doing so."

If Judge Grewal agred that there is no good cause for a belated infringement accusation, he could deny that part of Samsung's motion even if Samsung didn't oppose Apple's amendments (in which case Apple wouldn't formally oppose Samsung's). The court is always the gatekeeper.