Qualcomm attacks Apple in ITC filing, calls it a patent infringer who should be embarrassed

[Update on December 13, 2012] Qualcomm later withdrew this letter and asked the ITC not to give it any consideration, arguing that it had been filed (by a law firm) without "appropriate authorization". [/Update]

Samsung is not the only supplier with which Apple is presently at loggerheads because of patent enforcement matters including the meaning of FRAND. For the first time (unless I and everyone else reporting on these issues missed something), Qualcomm -- the maker of the baseband chips built into all wireless Apple devices starting with the iPhone 4S and the first 4G iPad (the 4G version of the third-generation iPad) -- has not only disagreed with Apple on certain FRAND questions but has openly attacked Apple in an official document. In the harshest terms, in fact.

It's highly unusual for companies in any industry to lash out at their largest customers. When it happens, it's either a sign of an impending divorce or, which I believe is the case here, the vendor is panicking because it's worried about a fundamental threat to its business model. Qualcomm's business is very much about SEP monetization. They also build products, but if it weren't for the leverage it gains from its standard-essential patents, Qualcomm wouldn't even be 10% as profitable as it is. And Qualcomm was the first company of this size to be investigated by the European Commission (as Samsung and Google/Motorola Mobility are being investigated now) for suspected SEP abuse.

Even against this backdrop I was surprised and almost shocked to see so much vitriol from Qualcomm against Apple in its response to Apple's answer to a couple of ITC questions that the Commission (the six-member decision-making body at the top of the ITC) encouraged all stakeholders to comment on. Those questions are the availability of injunctive relief over SEPs and criteria for a FRAND royalty rate, and the relevant investigation is the one of Samsung's complaint against Apple. Not only did Qualcomm make a submission of its own but it chose to file (which it didn't have to do) a reply to Apple's answers to the Commission's questions. Let me show you just two paragraphs from that reply, larded with aggressive allegations and acrimonious rhetoric (click on the image to enlarge or read the text below the image): 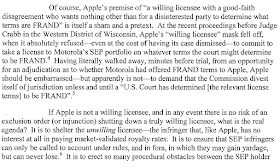 "Of course, Apple's premise of 'a willing licensee with a good-faith disagreement who wants nothing other than for a disinterested party to determine what terms are FRAND' is itself a sham and a pretext. At the recent proceedings before Judge Crabb in the Western District of Wisconsin, Apple's 'willing licensee' mask fell off, when it absolutely refused--even at the cost of having its case dismissed--to commit to take a license to Motorola's SEP portfolio on whatever terms the court might determine to be FRAND. Having literally walked away, minutes before trial, from an opportunity for an adjudication as to whether Motorola had offered FRAND terms to Apple, Apple should be embarrassed--but apparently is not--to demand that the Commission divest itself of jurisdiction unless and until a 'U.S. Court has determined [the relevant license terms] to be FRAND'.

If Apple is not a willing licensee, and in any event there is no risk of an exclusion order 8or injunction) shutting down a truly willing licensee, what is the real agenda? It is to shelter the unwilling licensee--the infringer that, like Apple, has no interest at all in paying market-validated royalty rates. It is to ensure that SEP infringers can only be called to account under rules, and in fora, in which they may gain yardage, but can never lose. [...]"

The word "sham" appears in the section quoted above. Prior to that occurrence, Qualcomm already refers to Apple's anti-injunction argument as "a total sham". There are also several aspects of Apple's position that the letter calls "absurd".

Qualcomm tries to use the history of the Wisconsin case to discredit Apple's willingness to take a license, and omits some important facts. While I expressed my belief, in my comments on the dismissal of that FRAND contract case, that Apple should have seized the Wisconsin opportunity to solve its FRAND problem with Motorola, it's not correct to conclude from it that Apple doesn't want a license on FRAND terms. Apple's position was that Motorola owed it a FRAND offer. The court didn't like (and Qualcomm doesn't like) the idea of such a court-ordered offer possibly being used as a bargaining chip in order to negotiate down from that starting point, but Apple presented a credible legal theory (enforceable options contract) and just wanted the right to exhaust all appeals and to defend itself in infringement proceedings if Judge Crabb had ordered a royalty rate in excess of $1 per unit. Apple never took the position that it never wanted to pay anything even in the event that an actual unlicensed use of Motorola's patents is proven. And Judge Crabb also made a clear distinction between whether Apple's conduct made a determination of a FRAND rate a good use of court resources and whether Apple would still be allowed to raise a FRAND defense in all other proceedings. In order to enable Apple to bring a FRAND defense in other litigations, including this Samsung-Apple ITC investigation, Judge Crabb even clarified/modified her order.

To be clear, Qualcomm's reply submission doesn't take a position on the question of whether Apple uses any particular Motorola SEPs. Qualcomm doesn't even take a position on Samsung's SEPs, a couple of which are at issue in that ITC investigation. But after finding that Apple is not a willing licensee, Qualcomm says that the agenda is to shelter "the infringer that, like Apple, has no interest all in paying market-validated royalty rates". In some other paragraphs of the letter, Qualcomm refers to "obstinate infringers". I believe it's a perfectly reasonable interpretation of Qualcomm's letter to conclude that it characterizes Apple as an infringer (as opposed to a willing licensee, which is the distinction that the relevant part of Qualcomm's letter is all about).

Apple also filed a reply to various parties' initial comments and commented on what, for example, Qualcomm and Ericsson said in their responses to the ITC's questions. But Apple's reply comments don't bash Qualcomm (or Ericsson, for that matter). Apple just explains where and why it disagrees. The most combative part, relatively speaking, is that Apple calls a theory presented by Qualcomm and Ericsson "flawed". But Apple doesn't say that Qualcomm should be embarrassed or that it's an abuser, or that its claims are "a total sham" or even just "absurd".

Qualcomm appears nervous about the development of U.S. case law with respect to FRAND and injunctive relief. At present, no one is enforcing an SEP injunction (or import ban) against anyone in the United States. The ITC has come under pressure from lawmakers who are quite prepared to reform the statute governing the ITC if necessary to prevent that import bans will be granted over SEPs except under circumstances under which the federal courts can't provide effective remedies (for example, if a source of infringing goods is unidentifiable or if an infringer refuses to pay court-ordered, non-appealable royalties). Judge Posner's ruling is now before the Federal Circuit and FRAND supporters as well as those interested in keeping the door open to FRAND abuse have started to file amicus curiae briefs (last week the Federal Circuit granted Judge Posner's supporters more time to make their submissions). Everyone knows that if the Federal Circuit essentially upholds Judge Posner's ruling, it will be next to impossible for anyone to win an injunction in the United States over an SEP. And the Federal Trade Commission and the United States Department of Justice have taken positions in letters to the ITC and the FTC also filed an amicus curiae brief with the Federal Circuit fundamentally in support of Judge Posner. Qualcomm doesn't like any of this, and it's apparently chosen to go on the attack against one of its largest customers, Apple, because it presumably fears that a Posner-like FRAND regime would cost Qualcomm more money than losing Apple as a customer.

Patent exhaustion is a separate issue. Apple argues that Samsung and Motorola can't obtian injunctions against its products coming with a Qualcomm baseband chip because of Qualcomm's patent cross-license agreements with those companies. In that context, Qualcomm is torn and that's why it doesn't comment on patent exhaustion in its statements to the ITC in the Apple-Samsung case. On the one hand, Qualcomm knows that customers like Apple see value in the fact that Qualcomm has those license agreements in place. If it weren't for patent protection, Apple might still be buying baseband chips from other companies in the industry. On the other hand, Qualcomm would actually like to double-dip and collect patent royalties from its own customers' customers. But again, the focus of Qualcomm's submissions to the ITC here is completely on general FRAND issues that are unrelated to exhaustion issues. By prevailing on exhaustion with respect to Qualcomm chips, Apple could minimize the business impact of any import ban Samsung might win. But Qualcomm doesn't really want Samsung to win because it's Samsung or because Apple is Apple. Qualcomm is interested in its own ability to aggressively monetize SEPs.

[Update on December 13, 2012] Qualcomm later withdrew this letter and asked the ITC not to give it any consideration, arguing that it had been filed (by a law firm) without "appropriate authorization". [/Update]