Apple just filed a notice of appeal with the United States District Court for the Western District of Wisconsin in the FRAND contract case it brought against Motorola in 2011 in the form of counterclaims removed from an ITC investigation. A bench trial was supposed to start on November 5 but canceled after Judge Barbara B. Crabb dismissed the case after Apple had declared itself willing to take a license on court-determined terms only if the royalty rate for Google's (Motorola Mobility's) was not going to exceed one dollar per device or, as Apple subsequently proposed, if the court was going to simultaneously set a rate Google would have to pay for Apple's standard-essential patents or at least ensure that the related rate would be set in accordance with the same principles.

Originally the dismissal would have been prejudicial to Apple's FRAND claims, but Apple won a modification of the ruling that turned the dismissal into one without prejudice, which was a strategically important achievement that went largely unnoticed.

Here's Apple's notice of appeal (click on the image to enlarge or read the text below the image): 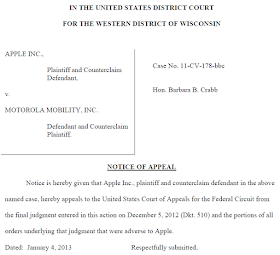 Notice is hereby given that Apple Inc., plaintiff and counterclaim defendant in the above named case, hereby appeals to the United States Court of Appeals for the Federal Circuit from the final judgment entered in this action on December 5, 2012 (Dkt. 510) and the portions of all orders underlying that judgment that were adverse to Apple.

This appeal is particularly relevant in light of yesterday's FTC consent order. For as long as any FRAND rate-setting action is pending, Google is barred from seeking or enforcing injunctive relief. If Apple's appeal succeeds, the case will most likely be remanded to the district court, and the canceled trial will then take place. Should Apple's appeal fail, Apple could still bring a new FRAND determination action and further bar Google from the pursuit of injunctive relief.

Apple's appeal could also re-raise its antitrust claims that Judge Crabb dismissed on summary judgment in August 2012. The FTC's settlement with Google does not preclude private parties, Apple in this case, from antitrust litigation over the same issues. I don't know if Apple plans to pursue its antitrust claims on appeal or will instead focus entirely on the FRAND contract issues.