Yesterday I quoted and summarized a few select passages from Apple and Microsoft's submissions to the FTC concerning the proposed Google consent decree. Apple and Microsoft are the targets of Motorola's deemed-abusive SEP enforcement activities. Among the two dozen submissions the FTC received there are also some that advocate SEP-based injunctions, most notably from Qualcomm, Ericsson and BlackBerry. Of the submissions made by the pro-injunction camp I consider Qualcomm's letter the most interesting one. In this post I will talk about Qualcomm's aggressive stance; in a subsequent post I'll discuss the concerns relating to arbitration that Apple and Qualcomm have outlined (they arrive at completely different conclusions, but both submissions have in common that they believe arbitration could lead to non-FRAND rate determinations).

Qualcomm's anxiety with respect to the leverage it will get in the future from its vast numbers of FRAND-pledged standard-essential patents (SEPs) becomes ever clearer. In December, a law firm submitted a letter to the ITC on Qualcomm's behalf that poured vitriol over Apple only to be withdrawn a couple days later, presumably because senior management determined that this was the wrong way to express disagreement with a huge customer. Meanwhile that same firm -- Cravath, Swaine & Moore -- has made a submission on Qualcomm's behalf, commenting on the envisioned FTC-Google consent order. The letter contains a thinly-veiled threat that Qualcomm is prepared to take the FTC to court over standard-essential patents should its own pursuit of injunctions against allegedly-unwilling licensees be investigated and held anticompetitive.

The threat is credible given that Qualcomm's profitability very much depends on its ability to leverage SEPs (partly to strike license deals, partly to sell products on the basis that substantial license fees would be demanded anyway). The only antitrust issue that is critical to Qualcomm's business is FRAND. Qualcomm is aware of developments in case law, in federal court as well as the regulatory arena. Yesterday I quoted from a joint Huawei-ZTE filing in an InterDigital case a passage that recalls various high-profile decisions and statements by U.S. courts and governmental agencies over the last year. What Huawei and ZTE seek to leverage in their role as defendants is what Qualcomm is presumably experiencing as a nightmare.

Here's the passage that culminates in the threat of litigation (click on the image to enlarge or read the text below the image): 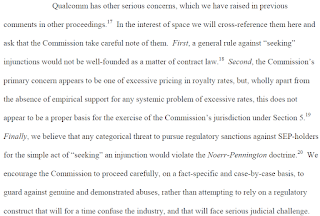 "Qualcomm has other serious concerns, which we have raised in previous comments in other proceedings. In the interest of space we will cross-reference them here and ask that the [Federal Trade] Commission take careful note of them. First, a general rule against 'seeking' injunctions would not be well-founded as a matter of contract law. Second, the Commission's primary concern appears to be one of excessive pricing in royalty rates, but, wholly apart from the absence of empirical support for any systemic problem of excessive rates, this does not appear to be a proper basis for the exercise of the Commission's jurisdiction under Section 5. Finally, we believe that any categorical threat to pursue regulatory sanctions against SEP-holders for the simple act of 'seeking' an injunction would violate the Noerr-Pennington doctrine. We encourage the Commission to proceed carefully, on a fact-specific and case-by-case basis, to guard against genuine and demonstrated abuses, rather than attempting to rely on a regulatory construct that will for a time confuse the industry, and that will face serious judicial challenge."

The first item basically says that many FRAND pledges cannot be construed to waive the right to seek injunctions. The second one says that concerns about excessive royalty rates don't justify antitrust intervention. The third point is that a couple of Supreme Court decisions provide a certain degree of immunity to a litigant's behavior. The paragraph then concludes with a stern warning. Qualcomm does not say explicitly "we (Qualcomm) are going to sue you", but if a company that has its own antitrust history in connection with SEPs says that the FTC's approach "will face serious judicial challenge", it doesn't mean to say "we (Qualcomm) are not going to do it because we're too nice to sue, but we're afraid that others will". Without a doubt, this is a threat to go to court if the broad lines of the proposed FTC-Google decision and order are ever applied to Qualcomm's pursuit of injunctions.

The message is basically that Qualcomm is not going to accept this kind of FRAND enforcement framework as a consent decree if it's ever going to be in Google's current situation. It wouldn't agree to this, and the FTC (or DoJ) would have to instigate antitrust litigation if it wanted to achieve a similar result. Unlike Google, which also had an interest in putting its antitrust issues in the search engine business to rest, Qualcomm has one and only one concern: a maximum degree of enforceability of FRAND-pledged SEPs. Google decided to take the deal the SEP offered because it felt that there were enough loopholes in it that it wasn't wise to fight over SEPs and complicate a settlement on the search engine side. Qualcomm, however, indicates that it won't waver in its defense of its number one (and two and three) business interest. Everything will then depend on antitrust regulators' determination to defend the public interest. The fact that Qualcomm makes lots of money with SEPs doesn't mean that the standardization system would grind to a halt if SEP holders like Qualcomm couldn't seek sales and import bans -- but the harm to consumers from excessive SEP royalties and abusive injunctions is clear.