I just reported on Nokia's new RFID-related U.S. patent infringement lawsuit against HTC in the Southern District of California, which others also discovered (Bloomberg, Priorsmart). What others haven't noticed yet -- but will presumably notice later today -- is that Nokia has also filed a second ITC complaint against HTC. Unlike the San Diego complaint, the ITC complaint hasn't become publicly available yet, but on the ITC's electronic document system I found this list of confidential exhibits filed by the Alston & Bird firm on Nokia's behalf (click on the image to enlarge): 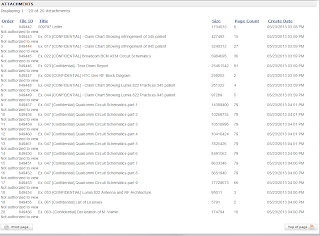 The titles of those 20 attachments provide the following indications:

This filing comes a week before the trial in the investigation of Nokia's first complaint against HTC, which it brought in May 2012.

This is reminiscent of Nokia's litigation tactics against Apple. In March 2011 it also brought a second ITC complaint (in that case, after the trial in the first investigation, but also prior to a final ruling). Three months later, these parties settled (the fact that Nokia was making considerable headway in Mannheim, Germany, with rulings scheduled for the week following the settlement, may have played a far greater role than that second ITC complaint).

Subsequently to publishing this post I obtained a list of the six patents asserted in Nokia's new ITC complaint:

With this week's nine new patents-in-suit (six patents at the ITC, three in the Southern District of California), the number of patents Nokia has in action against HTC totals 50.