If you spend $12.5 billion on an acquisition mostly positioned as a patent deal and the patents you have in your books at a value of $5.5 billion fail to give you leverage in litigation corresponding to even 1% of their book value, you might as well spend a few million dollars on a long-shot appeal. Yesterday Google's Motorola lost its ITC bid to ban Microsoft's Xbox gaming console, about a month after the U.S. trade agency had thrown out the remainder of its case against Apple. In both cases (Apple and Microsoft), only one patent remained in the case at the time of the final ruling. In Microsoft's case, the patent was WiFi-related, and in Apple's case, a patent on using a proximity sensor to deactivate a touchscreen if the phone is held close to the user's ear.

It has now become discoverable that the company gave notice of appeal of the final dismissal of the Apple case (click on the document to enlarge or read the text below the image): 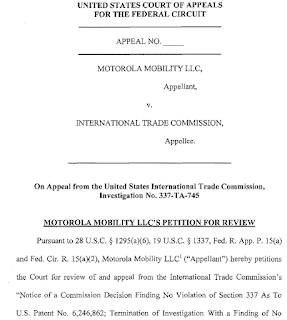 On Appeal from the United States International Trade Commission, Investigation No. 337-TA-745

Pursuant to 28 U.S.C. $ 1295(a)(6), 19 U.S.C. § 1337, Fed. R. App. P. 15(a) and Fed. Cir. R. 15(a)(2), Motorola Mobility LLC ("Appellant") hereby petitions the Court for review of and appeal from the International Trade Commission's "Notice of a Commission Decision Finding No Violation of Section 337 As To U.S. Patent No. 6,246,862; Termination of Investigation With a Finding of No Violation" entered on April 22, 2013 (attached as Exhibit 1) and its underlying determinations, including, but not limited to, the Commission Opinion issued on April 29, 2013 (attached as Exhibit 2) and the Initial Determination issued on December 18, 2012 (attached as Exhibit 3). This case was styled before the United States International Trade Commission as In the Matter of Certain Wireless Communication Devices, Portable Music and Data Processing Devices, Computers and Components Thereof, Inv. No. 337-TA-745.

A check for the docketing fee of $450.00 payable to "Clerk of Court, United States Court of Appeals for the Federal Circuit" as required by Fed. Cir. R. 52 is also enclosed.

This is already Google's (Motorola Mobility's) second appeal from that ITC investigation. In August 2012 the ITC already threw out three of the patents-in-suit, leaving only the sensor user interface patent in the investigation. Google (Motorola) appealed the dismissal of those three patents about a month later. That appeal is ongoing. Motorola filed its opening brief in February. The ITC and Apple, which intervened in order to support the ITC's defense of its decision, submitted their answering briefs on May 6. Google will get to file a reply brief, and then a hearing will be scheduled. Given the advanced stage of that first appeal it wouldn't be easy for the Apple to persuade the Federal Circuit to consolidate the two appeals and hold only one appellate hearing addressing both appeals from the same ITC investigation, but this would conserve court resources.