Google-funded anti-IP groups support Google against Oracle's copyright appeal -- is that it?

Amicus curiae briefs must be filed with U.S. appeals courts "no later than 7 days after the principal brief of the party being supported is filed". Google filed its brief in the cross-appeal of the Oracle v. Google copyright ruling on May 23. Yesterday (May 30) was the deadline for amici curiae ("friends of the court") supporting Google. A couple of months ago Oracle's appeal received support from an impressive and diverse roster of amici (overview of amici, former U.S. copyright chief's warning against eviscerating protection for software, Sun founder's submission explanatory filing by academics regarding API creativity, filings by organizations representing creatives). By contrast, the list of amicus briefs supporting Google is so underwhelming that I'm wondering whether someone is still going to file something (maybe someone got confused about the deadline?). With the greatest respect for the work that some of the individuals ("Computer Scientists") did several decades ago, this mostly comes down to an effort orchestrated by two Google-funded, IP-hostile organizations. I really thought Google, being as powerful as it is, could do better than that. Here's the current and probably final list (click on the image to enlarge or read the text below the image): 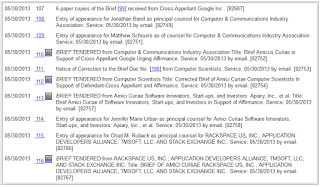 I'm going to comment on those briefs in the coming days as they become available. At this point only the EFF's brief is available. But even before the content of all those briefs is known, it's worth talking briefly about who actually came out in support of Google's anti-copyrightability and self-service-is-fair-use positions:

In previous posts (1, 2) I already wrote that amicus briefs are not only about what is said but also about by whom it is said. Oracle received support from substantial organizations as well as from individuals (such as former U.S. copyright chief Ralph Oman) who are very sophisticated in the IP context. Oracle received independent support from such amici. And Oracle's supporters showed a credible basis for being profoundly concerned about the implications of the district court's ruling. By contrast, Google has had to use organizations it funds in order to drum up the appearance of support, may have confused well-meaning individuals and small companies about what's truly at stake here, and the motives of supporters like Rackspace, whose business model is about the commercial exploitation rather than creation of IP, are also questionable and not likely to appeal to the Federal Circuit judges.

[UPDATE on May 31] Oracle spokeswoman Deborah Hellinger has now issued a comment: "I guess everyone is having collective amnesia about the uncontroverted testimony that Android is not compatible with Java." [/UPDATE]