The weather is lousy here this weekend, so I might as well comment on a third amicus curiae brief filed in support of Google against Oracle's Android-Java copyright appeal. Yesterday I already discussed the two amicus briefs orchestrated by the Electronic Frontier Foundation (EFF). This morning I saw that the Application Developers Alliance issued a scathing press release on its amicus brief in this case, which it also published on its website. This means that three of the four Google-supporting amicus briefs have been published; only a Google lobbying front, the CCIA, hasn't done so yet, but its brief will soon appear on the Federal Circuit's electronic docket.

I already said in the post I just linked to that there's only one thing that app developers are truly concerned about: that if Oracle prevails, Google may have to bring Android back into the Java fold, necessitating rewrites, recompilations and redeployments of existing apps. The App Dev Alliance just doesn't admit this. It talks about all sorts of scenarios that aren't truly a concern to app devs. The true concern -- Google possibly having to modify Android's APIs over a transitional period of time -- is obviously something app devs don't like, but in that event Oracle would have prevailed in court and you can't blame the one who enforces the law -- you should always blame the one who violates it.

Oracle's appeal has elicited heat, not light, from Joel "on Software" Spolsky, the chairman of the App Dev Alliance. The organization's press release contains a quote from him that spans a relatively long paragraph but fails to present any reasonable argument. The organization's amicus brief has its shortcomings, which I'll address further below, but its style is reasonable -- unlike that of the Stack Exchange co-founder.

He starts with the words "Don't be fooled", but if there's anybody trying to fool people here, it's him. His first claim is that "APIs are not such a complicated thing". This contrasts nicely with what Google's own witnesses said at last year's trial about the skills required to design great APIs (click on an image to enlarge): 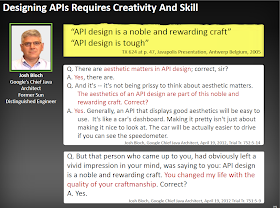 He then goes on to say that "[l]etting one company copyright APIs would be like letting one company have a monopoly on the use of the + sign [to mean addition]". As Mr. Spolsky likes to say, "don't be fooled": the asserted Java APIs consist of more than 7,000 lines, and if you want to learn about the creative choices involved (which don't exist for something like the plus sign), I can recommend an amicus brief submitted in support of Oracle by a group of computer science professors. None of the three pro-Google amicus briefs I've seen so far rebuts that submission, which I actually considered the most interesting one as far as the facts (not the law per se) are concerned.

After making such claims, which don't enhance the reputation of the organization he represents, Mr. Spolsky then calls Oracle's attempt "a ridiculous, shameful attempt to abuse the legal system for the purpose of extortion". Actually, Google was negotiating a license with Sun (before Oracle bought it) but decided to go ahead and release Android without a license.

Finally, Mr. Spolsky warns against "a catastrophic collapse of the ability of computer programs and systems to work together", which is just the doomsday version of what the EFF's briefs suggest. But I commend the Application Developers Alliance for at least making some limited effort to address what the EFF fails to explain: the fact that interoperability can also be safeguarded by other means than non-copyrightability. Congratulations: the App Dev Alliance is represented by a one-man-show appellate attorney from Texas while the EFF works with the renowned Samuelson Clinic in Berkeley, but it touches on the key issue the EFF doesn't even mention. Unfortunately, there isn't too much more substance than in the EFF briefs because the App Dev Alliance fails to give consideration to antitrust (I'll give a couple of examples further below), and its argument about "fair use" comes down to saying that regardless of whether a platform company would have a legal basis, it could always bring frivolous lawsuits:

Were this Court to accept Oracle's position, almost every player in the industry would be susceptible to suits for copyright infringement when using declaring code. If liability for the entire market were determined based on a case-by-case determination of fair use (an already unpredictable doctrine), developers would be unable to adequately predict their exposure."

This is a very weak argument, but at least it is a fair-use-related argument. If a platform company actually started suing app developers for using APIs when writing apps (as opposed to stealing APIs to create rival platforms), you can be sure that the whole software industry -- and this includes Oracle's amici like BSA | The Software Alliance -- and software users (banks, for example) would stand by the first one who gets sued. They would fund his defense; they would submit amicus briefs. So let's be realistic: the doomsday scenario of someone trying to destabilize the software industry at large is a different thing than Oracle's dispute with a company that was actually negotiating a license before it decided to just take its chances. About two years ago District Judge Alsup looked at the evidence in this case and wrote that Google "may have simply been brazen, preferring to roll the dice on possible litigation rather than to pay a fair price". Now Mr. Spolsky accuses Oracle of extortion, and his organization's brief says "[t]he result that Oracle seeks in this case [...] would also jeopardize the livelihood of the millions of individuals employed as app developers or employed by publishers and platforms".

Someone who wants to sue on a meritless basis will always find a way to do so and doesn't need API copyrights for this. If the only purpose is to sue, the kinds of companies that create major APIs all have plenty of software patents over which they can sue -- and if necessary, they can always buy some more on the secondary market.

The brief is also one-sided. Just like the start-ups and the two non-Californian, notoriously IP-critical venture capitalists supporting Google, the App Dev Alliance fails to address the scenario in which little guys need IP to prevent the hijacking and supplantation of their creations by big companies employing "embrace, extend, extinguish" tactics.

Finally I'm going to talk about some of the specific examples given by the App Dev Alliance in its brief, and I'll pick those that show a fundamental misunderstanding or even ignorance of antitrust realities.

There's really a misconception out there. It's wrong to conclude from the fact that many companies didn't assert API copyrights against those reimplementing APIs that there was/is no copyright protection. As I explained in my commentary on the EFF's briefs, in most cases there's simply a commercial interest in API adoption, there's "fair use", and in those cases in which someone might act anticompetitively, there's always antitrust law.

Like I said, I was intimately involved with that process (and had previously served as a strategy advisor to MySQL's CEO for three years). The App Dev Alliance is absolutely wrong when it says that "[t]he Commission was particularly worried that permitting Oracle to control the MySQL APIs would reduce the choices available to consumers and increase prices of database software". The facts can be found on the Internet. As Professor Eben Moglen's submission to the Commission explained, the competition concerns centered around the level of control Oracle would have over MySQL, despite its free and open source software (FOSS) status, due to the "copyleft" effect of the GPL license (requiring derivative works to be published under the GPL or not published at all). This also involved so-called storage engines, which rely on an API. The concern was just that Oracle could have modified MySQL's code for new versions released after the acquisition in ways that would have made it impossible for storage engines to run. In order to do that, you don't need copyright: you just have to be the one releasing and compiling the version of the code everyone uses. The other related issue was copyleft, not copyright. It was about whether Oracle could enforce the GPL's copyleft provisions against third-party storage engines, requiring them to release their code under the GPL, which would have killed most of their revenue opportunities. The App Dev Alliance's brief mentions Oracle's pre-clearance commitments concerning MySQL. The explanation I just gave is supported (and the distorted version of the App Dev Alliance proven wrong) by paragraph 646 of the final Commission decision:

Since copyleft can only be enforced by means of copyright (but note that Oracle waived only its right to enforce copyleft, not the copyrights it acquired), the paragraph I just quoted additionally shows that the European Commission and Oracle don't consider APIs generally non-copyrightable, contrary to what Google's amici incorrectly portray as well-settled expectations of this industry.

The App Dev Alliance says that under a settlement with the U.S. government (relating to competition in the browser market) "Microsoft was forced to make its APIs publicly available so that other developers could utilize the declaring code for products, including web browsers, that were fully compatible with the Windows operating system". Note that the issue was public availability. If someone doesn't make APIs publicly available (Google, for example, has various APIs, particularly related to advertising, that it consistently refuses to make available), you can't solve the problem with non-copyrightability -- but you can with antitrust.

Yes, programmers expect to be able to use public APIs for certain purposes. But this expectation doesn't change copyright law. You can also have expectations based on what most companies do voluntarily, and on "fair use" and antitrust law.