This is my second post today on Wednesday's filings in the Microsoft v. Motorola FRAND contract case in the Western District of Washington. In the previous one I discussed Google's attempt to game the system by paying a German appeals judge for expert reports and testimony.

The most important filings are the parties' motions for summary judgment:

The hurdle for any summary judgment is high. All of the evidence must be viewed in the light most favorable to the opposing party. But the discrepancy between Motorola's original royalty demand and the court-determined FRAND rate is beyond belief. As Microsoft argues in its motion, "the demands Motorola made in October 2010 were astronomically higher than an actual [F]RAND royalty for Motorola's standard-essential patents" (emphasis mine). One comparison I drew in April is that Motorola's original demand would have resulted in Microsoft paying for Google's acquisition of the whole company in about three years, while it would take 7,000 years at the court-determined rate (obviously the patents would expire long before).

Microsoft's motion for partial summary judgment illustrates the exorbitance of the original demands in two ways that, should summary judgment on this matter be denied, will likely also be used in the presentation of the case to the jury next month.

This picture (click on the image to enlarge) shows the difference on a per-unit basis: 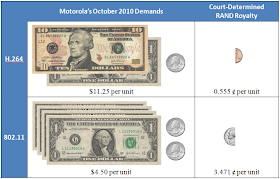 On the left-hand side you see bills and coins (quarters in this case) representing Motorola's average per-unit royalty demand. On the right-hand side there's the court-determined rate as fractional one-cent (penny) and five-cent (nickel) coins.

The motion also contains a good way to tell the story in simple terms:

The second related footnote draws the same analogy for the other standard at issue in this case, IEEE 802.11 (WiFi, or WLAN):

"If only Motorola's 802.11 offer were considered, the opening demand for the Taurus would be $3.4 million, and the house would be listed at a mere $51.8 million."

So the numbers are still more than outrageous. One reason why the discrepancy for WiFi is lower than for video codec implementations is that Motorola's original royalty demand related to the price of the end products, with the October 2010 letters explicitly stating that if a PC is sold with Windows, Motorola would want 2.25% of the price of the PC, not 2.25% of Microsoft's Windows revenue. The WiFi-related royalty demand related to the Xbox, which costs much less than the average PC. And the court awarded Motorola a higher per-unit royalty for WiFi than for its codec patents.

In light of these figures, Google's Motorola bases its argument against Microsoft's breach-of-contract claim on such theories as having allegedly acted in good faith and Microsoft allegedly having made a FRAND deal impossible by bringing this contract case instead of just letting Motorola obtain injunctions. The fight over jury instructions has already begun -- and the issues are also relevant now to the summary judgment process.

It would be silly to ask a jury whether someone trying to overcharge by a factor of roughly 2,000 did or did not make a blatantly unreasonable demand. But firstly the court needs to sort out the question of the legal standard for breach of contract.

I may write up an overview of the parties' summary judgment arguments in the days ahead. But with all that's going on this might also have to wait until the opposition briefs become available. The filing deadline for them is July 12, 2013 (next week's Friday). In the meantime, I wish all of my U.S.-based readers a wonderful (and really long) Independence Day weekend.