[Update in April 2014] Eight months later, Apple still has scored more offensive wins than Samsung, but has once more failed to obtain a permanent U.S. injunction, has been unable to defend a number of its European patents-in-suit against invalidity challenges, and, which is particularly important, the enforcement of the iconic so-called "Steve Jobs patent" through a U.S. import ban turned out to have no impact on Samsung's U.S. sales because consumers don't notice any changes as a result of a workaround that the ITC cleared. [/Update]

Amid the brutalities of the war on Iraq, the daily press conferences of the country's information minister, Muhammed Saeed al-Sahaf, were rather tragicomical. Wikipedia recalls "his grandiose and grossly unrealistic propaganda broadcasts before and during the war, extolling the invincibility of the Iraqi Army and the permanence of Saddam's rule", which included his stubborn denial of the presence of American soldiers in Baghdad until the bitter end.

Some commentators' denial of the fact that Apple is clearly on the winning track against Samsung is grossly unrealistic, but not grandiose by any measure. Nor is it tragicomical: it's just moronic and annoying.

Of course, there's been no knockout punch in that dispute. And it's not like Samsung is doomed to disappear into oblivion. I've already bought five different Samsung smartphones (my current one is the Galaxy Mega 6.3, the first phone with which I could even create blog posts on the road) and for sure I'll get to buy many more in the years to come. And as I pointed out in my coverage of Friday's ITC ruling, Samsung presented workarounds that were cleared. That's what really matters -- it's amazing that even lawyers (not just financial analysts, many of whom are ignorant anyway) are quoted in the media talking about how the ITC ban applies only to older products when the ITC has actually banned all Samsung "electronic digital media devices and components thereof" that infringe in the same way certain exemplary investigated products do, regardless of their name or release date.

Even if it would be a gross exaggeration to claim that Apple has nuked Samsung, there are two questions in connection with this dispute that no reasonable, unbiased, informed person can answer in more than one way:

Even a TV comedian, Conan O'Brien, made fun of Samsung's blatant copying. And this slide from last year's trial is worth more than a thousand words (click on the image to enlarge): 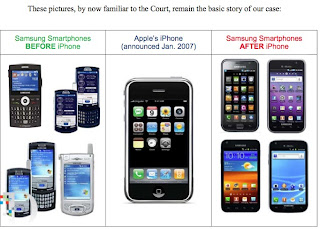 Implementing an industry standard isn't copying. It's simply conformity to specifications collectively set by industry leaders, which in and of itself raises antitrust issues. Without those specifications prescribing it, Apple wouldn't have to use any of the techniques covered by Samsung's standard-essential patents (SEPs) because there would be countless alternative solutions. It appears that Apple's newer products are licensed to Samsung's cellular SEPs because they come with Qualcomm chips. Patent exhaustion defenses were also raised with respect to Apple's previous suppliers (Intel/Infineon). Even if we assume for the sake of the argument that Apple is not or at some point was not licensed, there's no doubt that it was always at least entitled to a license on fair, reasonable and non-discriminatory (FRAND) terms. That doesn't apply to Samsung's infringement of Apple's intellectual property.

This weekend I read the most off-base comment ever on the state of the dispute. Someone told a news agency that neither party to this earth-spanning dispute can declare international victory because of all those allegedly "split" decisions. I strongly doubt that the guy who said this ever even read any of the international rulings, except maybe from the UK, where neither party has prevailed on an offensive claim, rendering that jurisdiction irrelevant to the analysis of who's winning.

It's not hard to file lawsuits in a dozen countries. Anybody with money and patents can do that. It has nothing to do with strength. Some of the most powerful patent holders get their way by simply scoring a decisive win in one or maybe two jurisdictions.

I would give someone who says that there's no clear victor, and a news agency that parrots this claim in a headline, the benefit of the doubt if we were talking about a dispute in which, for example, one party prevailed on six offensive claims and the other on two, but one can make a reasonable argument that the two wins were about more powerful patents and/or in larger markets. In such a scenario, true experts may still be able to discern a clear winner (possibly even the party with the two offensive wins!), but it wouldn't be completely crazy for someone who just gives an agency a quote for the sake of being quoted to say that it's not easy to see if anyone is winning.

In connection with Apple v. Samsung, things could hardly be clearer.

Samsung's global scattershot litigation against Apple has only made incompetent people believe that the battle is somehow balanced and could go either way, but the facts say that it's been a near-total failure. The fact of the matter is that Samsung has won ZERO enforceable injunctions against Apple so far. Z-E-R-O. The ITC import ban got vetoed for reasons that would also have applied if Apple had (which it's never done) asserted a FRAND-pledged SEP in this way. All of Samsung's other claims in the U.S. (in the ITC investigation and in California) failed. Samsung prevailed on two of its four SEP claims in Korea, but the injunctions were stayed pending appeal. Samsung lost in Japan and it's pursuing a case in Australia that the judge described as ridiculous. Samsung lost its offensive cases in multiple European countries, with an almost negligible exception: in the Netherlands, after losing the strategic battle over injunctive relief, Samsung was awarded a damages claim over a single SEP in that tiny country, which if Samsung is very lucky will amount to a couple hundred thousand dollars.

So what Samsung has won in this huge international dispute with all those "split" decisions is ZERO enforceable injuntions and a MINOR damages claim in a small country. With the greatest respect, this is something that news agencies should be able to research, and when they've researched it, they should be able to draw the appropriate conclusion from it. There's simply no reasonable basis at this point for claims or suggestions that Samsung has any such thing as leverage over Apple.

Granted, Samsung has fended off a number of patent assertions by Apple (especially, but not only, in Germany), but those defensive achievements don't solve the problem or give someone leverage against a deep-pocketed rival with a huge patent portfolio. If Apple prevails on a key patent like the "Steve Jobs patent", it doesn't matter whether there are two or three or maybe ten other patents that are found invalid or not infringed at the same time. That's just a minor expense.

It's not just about court rulings. It's also about companies' behavior. Since Apple initiated litigation, Samsung has actually modified its products. It designed newer products to be more distinguishable from the iPhone and iPad. It removed features like rubber-banding. Those are major wins because they enable Apple to defend the uniqueness of its offerings. But there are no known examples of Apple changing its products as a result of Samsung's assertions.

If Samsung continues to defend itself very well, and continues to work around any patents underlying sales or import bans, it can certainly keep on fighting for some more time. But after more than 27 months of pursuing claims in various countries, Samsung has zero enforceable injunctions and only a minor damages claim to show, while Apple has scored a number of wins.

It's also worth noting that Samsung has had zero wins of any kind -- regardless of remedies -- relating to any of its non-SEPs, and that Samsung's use of SEPs against Apple is being investigated by antitrust authorities on three continents, while there is no antitrust issue at all so far with respect to Apple's assertions.

Let there be no doubt that the outcome will be a settlement under which Samsung is the net payer and faces anti-cloning restrictions. It may take time. But it will happen.