The Northern District of California is regaining its role as the center of gravity of Apple v. Samsung from the ITC. Two trials are being prepared: a limited damages retrial scheduled for November 2013 as well as an infringement (including damages) trial in the parties' second California litigation, scheduled to begin on March 31, 2014. With all that's going on, I obviously can't do a new blog post every time someone moves or meets, but some developments are more interesting than others.

This post discusses the latest news relating to each California Apple v. Samsung case in a separate section.

There will be a case management hearing on August 21, in preparation of which the parties filed a joint case management statement (which, as usual, is mostly about what they disagree on) late on Wednesday by local time (this post continues below the document):

Samsung has two principal attack vectors against the November retrial, which Apple says it "simply seeks to "delay and derail". The first issue Samsung raised is that Apple, which had to replace a recently-deceased damages expert, is allegedly violating court orders by claiming "vastly greater damages". Notwithstanding a motion to vacate the case schedule, certain depositions relating to the damages claim will take place later this month. Apple even believes this motion is now moot; Samsung insists that it's not. Subsequently to the damages story, Samsung also asked for a new liability trial or appealable ruling (along with a stay pending appeal) concerning the '381 rubber-banding patent, arguing that Apple achieved validation by the patent office of a few claims including the claim-in-suit only through a claim construction under which Samsung does not infringe at all, or at least not to the same extent as before. Apple opposes Samsung's request on various procedural and substantive grounds and thinks it more efficient to do the retrial and then take a complete and final ruling to the appeals court.

One needs to read the case management statement completely and carefully to discover that Samsung is just in the process of launching a third attempt to dissuade the court from proceeding with the November retrial, and it's the same kind of story as for the rubber-banding patent, but now for the pinch-to-zoom API ('915) patent. The reexamination of that one isn't over yet. In late July the United States Patent and Trademark Office (USPTO) issued a "final" (but not final-final) Office action rejecting all claims of the '915 patent. Apple just needs to persuade the USPTO to take another look in order to preclude Samsung from even bringing another motion to stay the infringement action in California. Samsung alleges that "Apple has made numerous admissions to the USPTO subsequent to the first trial that directly contradict its arguments concerning the scope of the '381 and '915 patents". I've always advocated consistency between claim construction in connection with infringement on the one hand and validity on the other hand, but not every such issue that gets raised has substance. In this case, Samsung has not yet substantiated its allegations of inconsistency, and Apple has not said a thing about them yet, so let's talk about this when they get more specific. This wll have to happen soon because the very first item on Samsung's proposed agenda for the August 21 case management conference to be held by Judge Koh is to "[a]ddress the effect of the PTO's recent actions on the new trial and expected timeline for resolution concerning the '915 patent."

There have been some discovery-related hearings before Judge Grewal in connection with the second California litigation between these parties, and a related ruling.

On Monday the parties filed a stipulation dismissing "without prejudice any claims by Apple against Samsung for violation of Section 2 of the Sherman Antitrust Act (Nineteenth Counterclaim), and Unfair Competition Under Cal. Bus. & Prof. Code §17200, et seq. (Twentieth Counterclaim)". These are Apple's FRAND antitrust counter-counterclaims. I don't think this means much. There's narrowing pressure on the parties, and Apple didn't previously prevail on these claims in Judge Koh's court, but ongoing antitrust investigations and recent rulings show that FRAND abuse can indeed be found to violate antitrust law, despite the Noerr-Pennington doctrine. Apple doesn't abandon these claims forever. It could still bring them up in a new litigation, such as a separate antitrust lawsuit. The claims could also be mooted by regulatory action against Samsung at some point.

While reexamination became a big topic of discussion in the first California action only after the August 2012 trial, there's some initial activity with respect to the second trial. In June I picked up a report by the WHDA US PTO Litigation Alert blog on reexamination requests targeting two of the patents Apple is asserting against Samsung in the second California litigation: the word recommendation (autocomplete) '172 patent and '760 missed telephone call management patent. On August 1, the USPTO decided to reexamine various claims of the '172 patent (click on the image to enlarge): 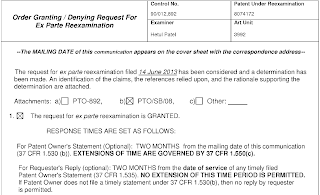 The claims undergoing reexamination now are claims 1-6, 8-15, and 17-38. Apple is presently still asserting claim 18, one of the claims to be reexamined. Apple recently dropped this patent, without prejudice, from a Florida litigation with Google's Motorola Mobility.

Interestingly, the USPTO did not hand down a simultaneous first Office action tentatively rejecting any claims. This is different from its approach in connection with all other Apple patents-in-suit (at least over the last couple of years) that have previously been reexamined. There are some examiners who tentatively reject 100% of the claims they reexamine, just to challenge the patent holder to defend patentability against the new challenge. In this case, the examiner apparently felt that while the anonymous requester has succeeded in raising a substantial new question ("SNQ") of patentability, which is the threshold for an ex parte reexamination to be conducted, the invalidity theories fell short of the low (but not this low) standard for a first Office action tentatively rejecting claims. Again, to some examiners there doesn't even seem to be a difference between the two standards in practical terms. To others, there's little room for reexamination petitions to fall right between these two standards. But it has apparently happened here.

The SNQ standard is very low. Well over 90% of ex parte reexamination requests are granted. As the USPTO explains, the standard is merely that there must be "a substantial likelihood that a reasonable examiner would consider the [previously not considered] prior art patent or printed publication important in deciding whether or not the claim is patentable". At a Congressional hearing, the then-Chief Judge of the Federal Circuit, Paul Michel, said that "[a]ny patent lawyer worth his salt can raise a substantial new question in virtually every case". If you look at it this way, even a number of the people who disagreed with the "birthers" would have conceded that they did raise a substantial new question. Still, a reexamination is now ongoing, and Apple has two months to respond. Should there be an Office action in the second half of the year or in early 2014 that rejects any patent claim asserted by Apple in the second California case, Samsung will obviously try to derail the March/April 2014 trial unless Apple withdraws the claims under reexamination pressure.

The second California trial is of particular concern to Samsung because it appeared at an appellate hearing on Friday that Apple will, going forward, face a more surmountable hurdle with respect to the "causal nexus" requirement for injunctive relief. The patents in the second case are more powerful than the ones in the first case, which were interesting but not devastating. If Apple wins an injunction over the patents from the first trial, it's just the pinch-to-zoom API patent that Samsung needs to worry about a bit (it claims it has a workaround, which Apple vehemently disputes). The design patents won't affect Samsung's business anymore at this stage. The tap-to-zoom-and-navigate patent appears narrow and easy to avoid. The rubber-banding patent is a key one, with a strong (though subtle) effect on the user experience, but Samsung has steered clear of its infringement (at least in connection with list-scrolling) for some time, which, as I said in a recent post, is an indication of Apple having the upper hand and getting competitive benefits out of its patent assertions. Should Samsung have to work around any of the patents-in-suit in the second California action, it will feel much more of an impact.