Given that there have recently been more and more reports of increasing Windows Phone market share in different parts of the world, and seeing at the same time that one of the problems facing BlackBerry is uncertainty about its future, this move makes a lot of sense because customers now know that Microsoft, which has demonstrated its long-term approach to such businesses, is increasing its commitment to the mobile devices business. I agree with what Gartner analyst Carolina Milanesi said on Twitter:

"Today's news puts at rest doubts expressed by some that Microsoft would walk away f[ro]m smartphones. If this isn't commitment not sure what is?"

In my first reaction I just want to focus, obviously, on the patent-related parts of this deal. The deal structure is the opposite of the Google-Motorola deal: Google acquired Motorola, according to what it told the world at the time, primarily for its patent portfolio and was just required to take over the product business as well because Motorola's then-CEO told Google that, stripped of its patents, the device business wouldn't be able to defend itself against patent-wielding rivals. Google grossly overpaid for Motorola's patents. It currently has only one enforceable patent injunction in place against Apple (in Germany) and none against Microsoft, and the one against Apple will be history long before the end of the year. By contrast, Microsoft merely licenses Nokia's patents, but the remaining Nokia company, which will keep the HERE mapping and location software (of which Microsoft is expected to become a top three customer) and the NSN infrastructure business, will still own them:

"As part of the transaction, Nokia will grant Microsoft a 10 year non-exclusive license to its patents as of the time of the closing, and Microsoft will grant Nokia reciprocal rights related to HERE services. In addition, Nokia will grant Microsoft an option to extend this mutual patent agreement to perpetuity. Of the total purchase price of EUR 5.44 billion, EUR 3.79 billion relates to the purchase of substantially all of the Devices & Services business, and EUR 1.65 billion relates to the mutual patent agreement and future option."

A "strategic rationale" document provided by Microsoft and published by AllThingsD's John Paczkowski clarifies that 8,500 design patents are indeed acquired, but not Nokia's utility (technical) patents. Design patents are typically not licensed to third parties. Here are the two patent-related slides of Microsoft's rationale document (click on an image to enlarge; this post continues below the two screenshots): 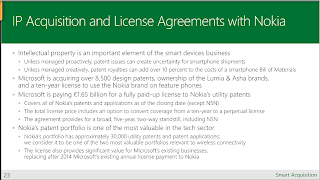 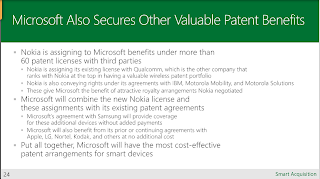 The fact that Microsoft would pay EUR 1.65 billion (almost $2.2 billion at the current exchange rate) for a 10-year license (including the option for a future extension) is a boost for Nokia's patent monetization aspirations. And Nokia's patent monetization -- which I've been watching (particularly the related litigations) for some time now -- will obviously continue. Other prospective licensees will deal with a company that is financially strengthened by this deal and can point to yet another "blue chip" licensee that has recognized the value of Nokia's portfolio.

Obviously, Microsoft could also have acquired that whole patent portfolio. But Microsoft already has an extremely strong patent portfolio (it simply has the highest "hit rate" in court of any smartphone-related litigant and has convinced 20 Android device makers of the need to take a royalty-bearing license, 19 of them without any litigation). That's why Microsoft -- unlike Google, which owned hardly any patents when it announced the Motorola deal more than two years ago -- didn't have to shore up its portfolio.

It's predictable that the markets will continue to speculate about potential M&A transactions involving the businesses and assets Nokia retains, including its patent licensing business and the related portfolio. I'm not going to engage in any such speculation, but assuming for the sake of the argument that a third party subsequently acquired Nokia's patent portfolio, I guess it wouldn't change anything in strategic terms for Microsoft. If someone bought those patents and stepped up enforcement, Microsoft and, by extension, Microsoft's customers (to the extent that they redistribute Microsoft technologies) wouldn't have to worry about it.

In closing I'd like to point to another structural difference between the Google-Motorola deal on the one hand and the Microsoft-Nokia deal on the other hand. The "Googlorola" break-up fee was $2.5 billion, reflecting desperation as well as concerns over antitrust approval. By contrast, today's announcement says that "[t]he transaction is subject to potential purchase price adjustments, protecting both Nokia and Microsoft, and a USD 750 million termination fee payable by Microsoft to Nokia in the event that the transaction fails to receive necessary regulatory clearances", which is a pretty standard level for such a fee, especially relative to deal size, while, compared to transaction value as well as in absolute terms, the Google-Motorola fee was extraordinarily high. There can be no doubt that today's deal is one of the most pro-competitive M&A deals in the history of the information and communications technology industry: consumers, wireless carriers, app developers and other stakeholders don't want the smartphone business to become a duopoly.