Patentgate: Apple motion for sanctions against Samsung pending before the ITC as well

Thanks to the end of the government shutdown the website of the United States International Trade Commission (USITC, or just ITC), a trade agency with quasi-judicial powers, was fully operational again today, including the agency's electronic document system. This fact enabled me to check again on what the docket of the ITC investigation of Samsung's complaint against Apple indicates in connection with the "Patentgate" scandal (disclosure of key terms of Apple's highly confidential patent license agreements with Nokia, Ericsson, Sharp and Philips by Samsung's lawyers to numerous executives).

Earlier this week Judge Lucy Koh (Northern District of California) wrote that it would be "particularly egregious" if it turned out that Samsung made use of highly confidential licensing information, in violation of a protective order, to influence the outcome of an ITC investigation in its favor. A hearing transcript contains statements by Apple's counsel on how Samsung allegedly leveraged some confidential information during the decisive phase of the ITC investigation and withheld information on the breach from Apple until right after the final ITC ruling.

In my first post on this matter -- shortly after the government shutdown began -- I already mentioned that "certain headlines on an ITC docket recently indicated" that Samsung is facing sanctions there as well. I had noticed some headlines but didn't blog about them because it was unclear what Apple wanted Samsung to be sanctioned for. The related filings are sealed, at least for now, but the headlines are publicly accessible (click on the image to enlarge): 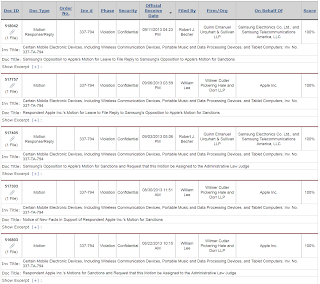 The above list shows that the parties are already fighting over this at the ITC. Now that the ITC goes back to work, it probably won't take too long before we see some kind of decision -- at least an order requesting further briefing, an order scheduling a hearing, or a Commission determination to assign the matter to the Administrative Law Judge. But the process is at a more advanced stage in the Northern District of California, where a hearing will be held early next week.