On Monday, Ericsson announced a settlement and patent license agreement with Samsung that will apparently generate billions of dollars in licensing fees over the years, starting with an upfront payment of $650 million. In the announcement, Ericsson claimed that the license "illustrates [its] commitment to FRAND principles". But Ericsson is being investigated by the Competition Commission of India in two parallel cases over a couple of issues, one of which is that it uses the selling price of devices as the royalty base even if the relevant wireless industry standards are implemented in chipsets that sell at a fraction of the price of a smartphone or tablet.

Not only in the standard-essential patents (SEP) context but also in general, it's typically the device makers who end up being sued over allegations of patent infringement. There's a variety of reasons for it, some of which have to do with the practical aspects of litigation especially in the United States. Thankfully, the Swedish Network for Innovation & Technology Transfer Support published a presentation (Powerpoint file) by Ericsson's Director of Technology Licensing, Tomas Dannelind, which sheds some light on Ericsson's (and some other players') rationale for leveraging their patents against device makers rather than the platform creators or chipset makers (click on the image to enlarge): 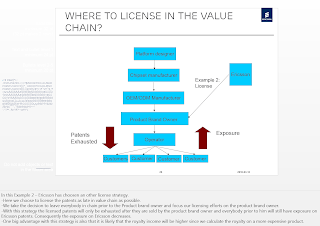 Let me first explain the dark red arrow on the left side. It relates to patent exhaustion: once Ericsson licenses a particular layer of the value chain (in this case, the Product Brand Owner, i.e., a device maker like Samsung), its patents are exhausted further down the chain: it can't double-dip and assert its patents against the lower layers (mobile network operators, distributors, end users). The arrow on the right side, "Exposure", indicates which layers of the value chain could still sue Ericsson without Ericsson being able to use its own patents against them. Let's think of an example: Ericsson now has (again) a patent cross-license agreement in place with Samsung. Samsung's customers are, therefore, licensed. If any of them sues Ericsson, Ericsson can't sued them with respect to their distribution or use of Samsung phones. But if, for example, Qualcomm (a chipset maker) sued Ericsson, Ericsson could still leverage patents against Qualcomm. The same applies to OEM/ODM Manufacturers such as Foxconn. That's because patent exhaustion works only downstream, not upstream.

At the bottom of the screenshot you can see the narrative/notes. The last line is not surprising, but definitely telling:

"One big advantage with this strategy is also that it is likely that the royalty income will be higher since we calculate the royalty on a more expensive product."

That's the "justification" for the royalty base: more money to the patent holder. But this is not an economic justification. There's no reason why Ericsson should get more from Samsung than it would from Qualcomm if a given patent (or set of patents) could also be licensed to the chipset maker. Ericsson asserted not only standard-essential but also various non-essential patents against Samsung, so on the non-SEP side it may claim that it owns technology infringed by, for example, Android. For SEP-only licensing, however, the proper royalty base is the price of a chipset that implements the standard.