Apple's patent infringement lawsuits against Android device makers continue to be anything but thermonuclear after a decision that came down late on Monday by local California time. A federal judge in the Northern District of California has just thrown out Apple's motion for judgment as a matter of law (JMOL) or a retrial in the second California case between Apple and Samsung, except for a negligible and inconsequential item that Samsung had not even argued at the spring trial and a finding that one day Apple will get supplemental damages for a limited period of time the jury couldn't consider and only concerning a couple of products (but no tripling for willfulness or anything like that). This practically complete denial is not an unexpected outcome given the rather high legal hurdle for JMOL motions, and Apple's top brass is presumably even less interested in this on the eve of the iPhone 6 launch (by the way, that's going to be the first iPhone I buy, not because I expect it to become my primary phone after all these years of using Android, but because I need to look at it as an app developer and appreciate the larger screen).

Apple's JMOL/retrial motion was an unmistakable sign of disappointment over the early-May jury verdict that resulted in only about 5% of the damages award Apple was seeking (the key indicator of disappointment is not the JMOL part per se, but the request for a retrial) and, at this point, its last chance for short-term leverage over Samsung after last month's withdrawal of all ex-U.S. lawsuits pending between the two and denial of a sales ban.

This is the public redacted version of the ruling (this post will continue below the document with further commentary as well as a report on the latest filing in Samsung's appeal of the final ruling in the first California Apple v. Samsung case):

Now that it's clear Apple won't get any improvement from the district court (it will obviously keep trying this at the Federal Circuit), the next milestone will be Judge Lucy Koh's ruling on Samsung's JMOL motion. Samsung faces the same high hurdle but is still more likely to achieve some sort of improvement than Apple was. For example, one of Apple's patent claims-in-suit has meanwhile been rejected by the United States Patent and Trademark Office, and another patent-in-suit is from the same patent family whose European member has unanimously been deemed invalid by ten judges. I believe there's a 60%-70% probability that at least one of Apple's liability wins (all three of which are questionable for different reasons) will be overruled by Judge Koh, and a 30%-40% chance of the verdict being upheld. The recent denial of Samsung's "Alice motion" was just a sideshow. The most important issues remain to be resolved.

After deciding on Samsung's JMOL motion, which could happen any day now, we'll see a cross-appeal to the Federal Circuit. Apple was in such a hurry that it immediately appealed the denial of a sales ban, but as I wrote on Thursday (when I reported on Apple's motion for postjudgment royalties of $6.46 per device that infringes the three patents underlying the liability findings), all the appeals relating to the second California Apple v. Samsung case are going to be consolidated. I have no more doubt about that given that the JMOL ruling on Apple's motion has already come down and that the ruling on Samsung's motion won't take very long. In the coming months, Judge Koh will have to rule on the aforementioned motion for monetary compensation as a substitute for an injunction. Apple's desire for this kind of remedy is understandable, but Judge Koh explained in her JMOL decision that she likes to resolve those kinds of issues after the appeal for reasons of judicial economy:

"Because the parties have indicated that an appeal is anticipated, proceeding without the Federal Circuit's guidance may cause unnecessary expenditures of time and resources should the Circuit reverse any part of the jury's verdict on liability. The Court thus finds it appropriate to delay the consideration of evidence of actual postverdict sales and calculation of supplemental damages until after the completion of the appeal in this case. The Court made this same determination in the first case."

Apple will presumably argue that it absolutely urgently needs an award of postjudgment royalties, but I doubt that Judge Koh will find this a good use of her time.

There is one part of Judge Koh's reasoning that reflects far more negatively on Apple's "thermonuclear war" against alleged "copycats" than the outcome of the JMOL process itself. What almost adds insult to injury is that Judge Koh exposes Apple's copycat claims by saying that "Apple's evidence was weak at best" with respect to its (past) practice of the asserted claims. After opening argument at the spring trial Judge Koh already denied an Apple motion for curative instructions relating to (among other things) its practice of the asserted claims (Apple wasn't allowed to present argument at the trial with respect to non-asserted claims of the same patents, which I thought was very strict). Then Apple wanted to place the emphasis on its alleged past practice of certain claims. Even for what Judge Koh describes as "three unasserted extra claims," the order says "Apple's claim is unavailing because this Court gave Apple the choice not once, but twice, to rebut by presenting evidence at trial that Apple practices the extra claims, but Apple declined the Court’s offer both times." And the order notes that "Apple's choice to assert the asserted claims as opposed to the unasserted claims was a strategic decision beneficial to Apple," for example, because there were pretty strong invalidity arguments against the unasserted claims.

Not only Samsung but also Google, whose software was at the heart of Apple's infringement contentions and "copycat" smear campaign, will be pleased with the JMOL order.

Samsung filed reply brief in support of its appeal of the final judgment in the first California Apple v. Samsung case -- hearing likely to take place in the fourth quarter

Since Apple's patents-in-suit have not proven strong enough to yield serious strategic leverage, all that's left to be sorted out between Apple and Samsung is a payment for past infringement. Apple withdrew its cross-appeal, so the only party still fighting for an improvement is Samsung. And Samsung's number one priority is to get the $929 million verdict in the first case (that's the number after a portion of the original verdict was replaced with a new amount by means of a retrial) reduced. That damages award was mostly about design patents and trade dress, not about technical patents. Samsung has support from 27 law professors and a tech industry group. Apple is defending that jury verdict all the way and has support from 54 design professionals and a group of mostly no-tech and low-tech companies, a fact that in and of itself buttresses Samsung's (and Samsung's supporters') argument that a disgorgement of unapportioned infringer's profits over a design patent is not appropriate for today's multifunctional high-tech products such as smartphones.

On Friday, Samsung filed its reply brief, then corrected it, and the final redacted version became available yesterday. There's nothing new in it. The next interesting step is going to be the appellate hearing, though I think there's a reasonable chance of a complete settlement in the meantime. While it's not new per se, I wanted to draw attention to something that Samsung's reply brief highlighted again. Samsung actually had evidence in the first California case (but was not allowed to present it to the jury, which is part of the reason why Samsung wants the ruling in the first case overturned) that it had designs with rounded corners and other iPhone-like elements in the works back in 2006, before the original iPhone was shown: 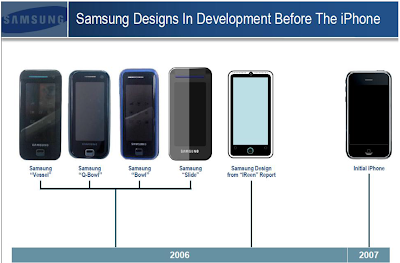 I acknowledge that I underestimated the significance of this evidence in 2012. In retrospect I think it was unfair that Apple had the right to smear Samsung, in court and in the media, for shameless copying when the truth is that Samsung had come up with such designs totally independently. When the Federal Circuit judges see this, they may feel that a new trial in the first case is warranted, or at least it may show to them that the ruling in the first case way overcompensates Apple for its design "innovations."

Finally, here's the full text of the public version of Samsung's reply brief: