Four years ago to the day, Microsoft sued Motorola over Android. A few days later, Motorola sued Apple. Disputes between Oracle and Google, Apple and HTC, as well as Nokia and Apple were already ongoing. In early October 2010 I decided to focus on smartphone patent disputes (as a blogger and as a consultant). I saw some key IP issues that had to be resolved, and I thought it would take about a year and a half for most of these to be sorted out. A year and a half is roughly the time an ITC investigation used to take.

48 months later, Motorola still hasn't taken an Android patent license from Microsoft, though more than two dozen other companies have. After more than 40 months of litigation, Samsung still hasn't paid Apple a cent. Nor has Motorola, which agreed on a ceasefire with Apple, but not on a license deal. And Oracle v. Google ceased to be a patent dispute about two years ago when Oracle decided to rely exclusively on copyright, which worked out so well that Google is now on the losing track and will presumably file a last-resort petition with the Supreme Court next week.

The fact that things are taking so long is, all by itself, a clear indication of the very limited leverage that major litigants have so far been able to get from their patent assertions. These are not the longest-running patent disputes in history. Not even in the smartphone space, where German patent licensing firm IPCom has been suing Nokia and HTC, to no avail so far, since 2007. But "big player v. big player" disputes in this industry are clearly taking longer now than they used to. There was a time when settlements occurred either before trial or at least before a decision. Now there is a trend toward exhausting all appeals. The following chart shows the duration (number of months on the X axis) of eight disputes (with separate bars for the U.S. and ex-U.S. parts of Apple v. Samsung); the two at the bottom are still ongoing with no end in sight (click on the image to enlarge): 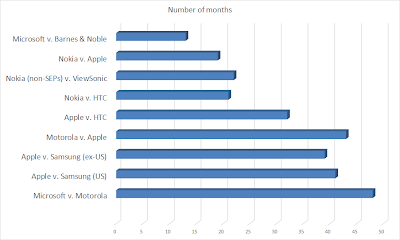 When some of these patent infringement assertions were brought, most of which targeted Android, I expected some serious impact. But Android's market share continued to rise and is, according to the very latest data, now at about 85% (click on the image to enlarge):

The number of patent assertions against Android was awe-inspiring. I visualized some of them with my signature battlemaps. While everyone gets sued by the trolls, Android was a unique lawsuit magnet with respect to assertions by very large players. And for the first couple of years, Android's rivals, despite a number of failed assertions, achieved some good results in court. But most of those temporary wins didn't last, and the ones that lasted didn't prove strategically impactful.

Of course, just like there has been some fundamental change since certain interim decisions came down in 2012, there can again be key developments in disputes that haven't been settled. Still, the time has come to take stock based on what the final or most recent decisions in those cases have been and on what the state of affairs was when various disputes were settled.

Based on where things stand now, more than 90% of 222 smartphone patent infringement assertions by major players against other large organizations have gone nowhere, with 109 assertions (49%) having failed (so far) and 93 assertions (42%) having been dropped outside the context of a comprehensive settlement or having suffered a comparably negative fate: 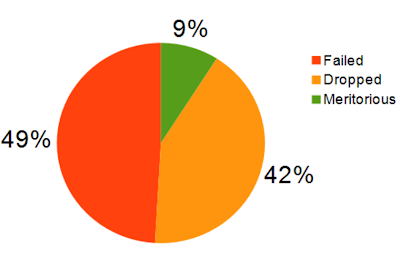 Out of the 9% of cases (20 of the 222 assertions) in which liability was established (and not reversed so far, or not before a settlement), only 10 -- 4.5% -- resulted in lasting injunctive relief. And that number would most likely be closer to 3% if, for example, the patents underlying Nokia's German injunctions against HTC had come to judgment in the Federal Patent Court. What's more important than alternative scenarios is that none of the injunctions against the Android operating system itself (including its key apps) had enough impact to force someone into a settlement.

The 222 smartphone patent infringement assertions I've analyzed were brought by (in alphabetical order) Apple (against HTC, Motorola, Nokia, and Samsung), Microsoft (against Barnes & Noble and Motorola), Motorola (proactively against Apple and reactively against Microsoft), Nokia (against Apple, HTC, and ViewSonic), and Samsung (reactively against Apple). I focused only on three key jurisdictions: U.S., Germany, UK. Those are large markets in which I was able to research the cases, and in which substantial numbers of assertions had been brought. Otherwise the numbers of assertions would have been too low in certain jurisdictions to form even a remotely representative sample. This, by the way, "sandbagged" Samsung's results in my analysis because it prevailed on two SEPs in South Korea and on one in the Netherlands. However, Samsung had the best validity results of all the major litigants whose smartphone patents got challenged: it salvaged (albeit in a narrowed form) two patents in the Federal Patent Court of Germany -- i.e., as many as Apple, Microsoft and Motorola combined, though only three of its patents were adjudged there. Just wanted to mention this for the sake of accuracy.

I could have included patent assertions by HTC (which countersued Apple in the U.S. and Germany, and Nokia in Germany) and Oracle (which, as I explained further above, is now relying exclusively on copyright in its dispute with Google). None of them went anywhere. But I wanted to focus on companies that brought large numbers of smartphone patent infringement assertions.

If you scroll down there, just focus on the color-coded columns. The first one is liability (a valid patent was infringed), the second one is injunctive relief. The green (successful assertion) cells are few and far between, on the right side even more so than on the left side.

I wanted to use only three colors for the different outcomes, so I had to assign one color or another to certain "gray area" outcomes. For example, if a German court stayed a case based on the assumption that the asserted patent was highly likely to be invalid (the usual hurdle in that jurisdiction), I treated it as a loss even if the Federal Patent Court ruling had not come down yet, but if the hurdle was lower (in some exceptional cases and with respect to utility models), I treated it as a "dropped" case, just to keep things simple. The following document lays out the rationale behind the colors and provides detailed commentary on each of the disputes (this post continues below the document):

Further Remarks Re. Outcomes of Infringement Assertions by Florian Mueller

Of course, one could have made a different selection and/or applied different criteria, and would then have arrived at slightly different results. And the timing of settlements made some plaintiffs look better (for example, Nokia did benefit from this factor because of the relatively early stage of its German HTC cases) than others (for example, Apple likely would have "won something" on remand against Motorola at the ITC). In Apple's case, the analysis could be even more negative. For example, while it settled with HTC before any infringement ruling came down in its Munich cases, the patents were subsequently invalidated, but I decided to omit those cases from my list.

I will reference this post in various posts over the coming months in which I'll discuss some potential conclusions -- political and commercial ones -- in detail. For now I'll just touch on a few of these and indicate roughly how I view all of this.

So much for now. I'll talk about the issues outlined above, and others, in the months and years to come. There are some important issues to deal with. I hope this analysis contributes useful data points and observations to the debate.