Buy one, get two free: the EFF's approach to amicus curiae briefs in Oracle v. Google

Six amicus curiae briefs in support of Google's petition for writ of certiorari (Supreme Court review) of the Federal Circuit ruling in the Android-Java copyright infringement case have been filed, as the official website of the Supreme Court indicates. Most of them include at least some signatories that are Google-funded and notoriously Google-aligned. Three (50%) of those briefs have a close connection with the (also Google-funded and notoriously Google-aligned) Electronic Frontier Foundation. I commented briefly on two of them last weekend. The third one was filed in the name of the Open Source Initiative, the (Google-funded) Mozilla Foundation and an advocacy group that recently hired an EFF staff lawyer to work on IP (and related) policy, and those signatories are represented by a law professor who was an EFF staff lawyer for some time.

I disagree with all those briefs, but in different ways and to different degrees. Some of the arguments are unconvincing and non sequiturs (for example, where they claim that fair use is an unacceptable basis for safeguarding interoperability), but what I dislike the most are cheap shots at the extremely well-reasoned Federal Circuit ruling. It's rather transparent that some hope to capitalize on what they believe to be antagonistic tension between the Supreme Court and the Federal Circuit going back to the days of Chief Judge Rader, who is no longer with the Federal Circuit and had no hand in the Oracle v. Google ruling anyway.

Rather than go into all of the things I don't agree with (because it won't matter if cert is denied, or it can, in the alternative, still be discussed should the Supreme Court not decline to look into this case), I just want to highlight a couple of things that I really--well, I'll try to put it diplomatically because there actually are some people involved with those briefs whom I respect tremendously (and even some whom I truly like and who do work on other issues that I'm indebted for)--so to put it nicely, I "struggle" with some of this.

As for the law professors' brief, no matter how hard I try, I can't see how it would be good and workable policy, enhance legal certainty or promote innovation to make copyrightability dependent upon the freedom of subsequent programmers who, because of their own decisions to copy, feel "restricted" in their choices. The law professors' brief seriously argues that this should be the measure. As a result, copyright as a whole would become a shifting-sands kind of intellectual property right where even the most creative work would be devoid of protection only because of whatever might happen (in unforeseeable ways) somewhere else much later. I'm thoroughly disappointed when I see non-parties to a case advocate stuff like that.

The thing I found most troubling about the "open source" (OSI, Mozilla, Engine) brief is that it talks for pages and pages about the benefits of open source software (yes, some very valid points are made in that context) but doesn't say a thing about the fact that Google elected not to use the Java material available under the GPL, a free (and open source) software license. Basically, the open source guys are saying that in order to protect open source, it must be possible to do closed-source derivatives. It's the most severe case of intellectual dishonesty and the least principled behavior I've seen in an IT industry debate in almost a decade. And not just that. It's also utterly ungrateful: Sun made plenty of Java code available under the GPL, and Oracle acquired it and has supported this ever since--only for some open saucers (a term humorously coined by The Register) to now argue that Oracle's defense of its rights threatens open source development. I have absolutely no respect for that, and it makes even less sense in a world in which more and more APIs become available on open source terms, such as in recent days the server components of the Microsoft .NET framework.

But before I get worked up over some people's less than principled stance, let me now end this post with some just-before-the-weekend fun. On Twitter, the EFF drew attention to a picture of 25 book covers: "Here are some of the books written by signatories to our Supreme Court brief in Oracle v. Google." Like I said before, there are undoubtedly some great people among the signatories of those briefs, but it all looks very orchestrated and there's clearly lack of support from the software industry (while other major software companies, including some of its direct competitors, back Oracle in this context). Anyway, since the EFF chose to show computer book covers in order to emphasize the industry expertise of its signatories, I thought I might, for the fun of it, show you the covers of the 12 computer books I wrote in the second half of the 1980s (the first two of them at age 16, the last two at age 19, and seven of them were published in Commodore International's official book series): 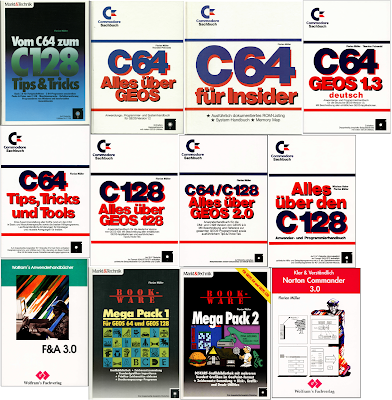 The day will come when I'll sign an amicus brief, too :-)