An estimated 700 protesters marched from one of the EPO's Munich buildings (the closest one to the Oktoberfest venue, for those who may have visited Munich on that occasion) to the Dutch consulate-general: 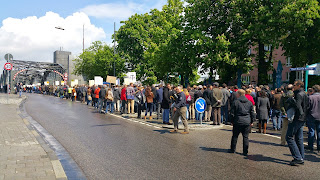 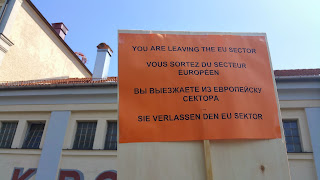 It's unfortunately true that the EPO, claiming immunity, behaves like an enclave that doesn't have to respect European/EU human rights and labor law standards. I don't think the EU institutions can turn a blind eye to this situation. Before the EPO starts granting EU-wide unitary patents, it must at least meet a certain European minimum standard in terms of checks and balances as well as access to justice.

After a 15-minute walk, the protesters arrived at the Dutch consulate-general. They were greeted by the consul-general himself, Mr. Peter Vermeij, who was an EPO vice president (in charge of patent administration and other areas of operational support) from 2007 to 2012. I took this picture of Mr. Vermeij adressing the SUEPO crowd (with the microphone): 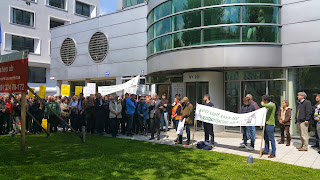 Mr. Vermeij acknowledged that the ongoing labor conflict at the EPO and the bad press it has already resulted in have (among others) the member states of the European Patent Organisation concerned. He said that the EPO should usually just go about its work and there should be no noise about it. This official concession of concern over negative publicity was interesting.

Mr. Vermeij invited a few staff representatives to his office to discuss the Dutch government's position (also on the human rights issues on which a Dutch court had sided with SUEPO) in private.

Toward the end of the demonstration, a staff representative said, citing a reliable but unnamed source, that a majority of the EPOrg's member states (at a Council meeting last month) was in favor of appointing an independent mediator to help resolve the sitation but EPO president Benoît Battistelli was adamantly opposed to this idea and threatened with his resignation for the event that mediation would have been imposed on him. The crowd ironically cheered.

As I've said several times before, the EPO has structural governance issues that must be addressed, though Mr. Battistelli's leadership style is certainly unpopular with staff. While I don't think Mr. Battistelli's resignation would in and of itself represent a solution, I also don't feel he's unreplaceable. The Administrative Council should have decided to take the mediation route anyway and should simply have accepted his resignation.

The EPO is clearly in crisis.