One can't plan the future, but one can at least prepare for it. Next year, there will be a new president and a new push for patent reform.

U.S. patent reform advocates have been disappointed term after term, presidency after presidency. Washington has a "do nothing" reputation, but a sea change appears to be around the corner and it may also create an environment in which, at long last, the massive and dramatic problems caused by a broken patent system may be addressed more forcefully and courageously than before.

Political correctness has terrible effects because it prevents politicians, the media and the general public from discussing the real issues without mincing words, and when you can't even talk about the real issues, you're very, very unlikely to identify and implement solutions.

Political correctness is the root cause of many problems not only in such contexts as immigration policy or the problem with certain ethnicities' crime rates.

There are many areas in which a dogma has been turned into an axiom. Even though I'm an environmentalist (my house has a groundwater heat pump and uses groundwater temperature for cooling), I'd like there to be a more open discussion of the causes of global warming. Just an example.

Political correctness is also a huge problem in the debate over U.S. patent reform. Organizations and individuals probably feared that they would be "anti-American" if they simply said that the U.S. patent system is broken and fails to serve true innnovators.

In all those congressional hearings on patent reform that I watched, each and every politician repeated the mantra of the U.S. patent system being key to innovation and allegedly being the envy of the world, when the reality is that it's the laughing stock of patent and industry professionals in the rest of the world. Over the years I've talked to so many patent lawyers from Europe and Asia, and even to patent examiners (though not the ones the EPO leadership accuses of having been in contact with me), about the overall situation, and no one believes that U.S. juries are qualified to determine infringement and validity issues, no one has ever disagreed with me that the Federal Circuit is generally too patent-holder-friendly, and no one has ever disagreed with me that the quality of USPTO-granted patents is generally even lower than that of European patents.

Impactful patent reform in the U.S. won't happen until at least a significant percentage of all politicians and stakeholders participating in the debate will start to tell the truth, which is that most information and communications technology patents are invalid as granted, that a high percentage of all claim construction decisions are reversed on appeal, that even those patents that are not invalid and are ultimately deemed infringed generally don't protect anything that justifies a 20-year monopoly, and that there is no point in incentivizing "being first to file" when the combination of copyright, trademarks, trade secrets, and the first-mover advantage in relatively fast-moving fields are more than sufficient to protect investment in innovation. Reform advocates must place more emphasis on the fact that ever more U.S. patents are not granted to U.S. companies, just like most European patents are not held by European companies. It must be said that the correlation between patents and innovation in a country is hardly a causation of patents promoting innovation, that patents increasingly serve as a substitute rather than an incentive for innovation, and that studies linking patents to innovation are often based on circular logic, considering each patent an innovation.

Less is more. How can anyone seriously believe that patent inflation has anything to do with increased innovative activity? Would anyone believe that merely printing more money creates prosperity? Reform advocates should talk about how to gradually bring the number of patents granted per year down to a fraction of the current rate.

With the political culture of recent decades, further U.S. patent reform will either not happen at all or it will be diluted and useless. But there is hope that the way in which such debates are held--in all policy areas--may change. Donald J. Trump is living proof that raising the real issues can work. He says there's no time for political correctness to make America secure again and great again. And I believe there's no time for political correctness and old-fashioned political strategies in connection with patent policy either.

It took Mr. Trump some time to convince others that his campaign was for real. Last month an Obama spokesman said the Trump 2016 campaign belonged into the dustbin of history, when the reality is that Donald J. Trump's candidacy may finally deliver on Obama's undoubtedly-unkept promise of "change" (of how political processes work). Time and time again, the media--and not just left-leaning commentaqtors--thought Mr. Trump had gone too far and was going to lose support. Instead, he kept rising in the polls. And now the media has started to talk about how he may win.

Bill O'Reilly's thoughts on whether Mr. Trump can really win and on the hurdles he faces make sense to me, but Fox News is obviously not trusted by everyone. Even the Wall Street Journal, which noted that many, many Democrats and independents agree with Mr. Trump on certain issues, would be more likely to agree with a Republican than the average newspaper. I found it really impressive when the Washington Post published an article on "why Trump may be winning the war on 'political correctness'." By far and away the biggest breakthrough is the latest TIME magazine, which has Mr. Trump on its cover and says: "HOW TRUMP WON (Now he just needs the votes)" (this post continues below the image): 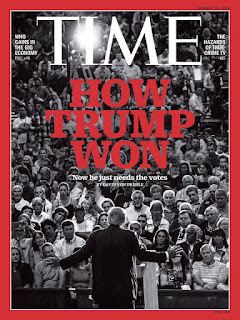 No real vote has been cast yet, and the GOP establishment may make a last-ditch attempt to get the candidate that career politicians and Republican donors want. A lot of things may still happen until Election Day. Where things stand today, I believe Mr. Trump has chances of well over 50% of becoming the 45th POTUS.

Political correctness is much less of a left-vs.-right question than some tend to portray it. There are times when idiocies and fallacies by conservatives right cause most problems. At this stage, however, the idiocies and fallacies of the left threaten average people's security and overall economic prosperity in America and Europe. When Silicon Valley leaders like Vinod Khosla know very well that 50% of jobs will go away due to technological progress in AI and robotics and, unlike in previous eras, won't just simply be replaced with new jobs, immigration must be extremely selective to have a positive bottom-line effect. This is an aspect of immigration policy in the U.S. and Europe that you don't hear anyone talk about because politicians usually have no grasp of innovation and its impact until it's too late.

It takes voters time to realize when certain approaches don't work, but a silent majority may finally be ready to elect someone who is bold rather than politically correct.

Pre-election polls likely favor a candidate like Mrs. Clinton because no one has a problem with saying so, but when people secretly vote, many who wouldn't openly admit that they support Mr. Trump will ultimately vote for him. That may include enough Democrats and independents for him to become president.

Pushing for patent reform in 2017 after a Trump victory

In my opinion, patent reform advocates should openly support the GOP in 2016, given that many Democrats, except for some really great ones like Senator McCaskill, are aligned with those who benefit from a broken and inflationary patent system. But that probably won't happen, especially since many of those who push for reform are traditionally aligned with the Democratic Party. Especially in California.

Assuming that Mr. Trump does become president and Republicans continue to have a majority in both houses of Congress, this is what I believe patent reform advocates should do:

The next president won't be inaugurated for about a year. But patent reform advocates should already now think about their message, not only with a view to who may or may not win but also because the tone of political debates is indeed changing now. The transformational impact of Mr. Trump's campaign is already a reality. An approach that flies in the face of conventional "political correctness" wisdom has made him the front runner, and every time the media said he had gone too far, he emerged even stronger. Fortune favors the brave, and U.S. patent reform advocates have by far not been bold and brave enough so far. Their push for "too little, too late" has been pathetic. They should try something new. Something Trump-style.

Political incorrectness isn't racism or anything

This is now the final and shortest section. I want to point out very clearly that I despise political correctness and I want real solutions to pressing problems facing Western civilization, but I view every person individually. On my app development team I have people from three continents, and I count people from different parts of the world and of different religions among my personal friends.

It's a great idea to be more tolerant here than certain other countries, but one can disagree on how much more tolerant we should be vis-à-vis intolerance of the dangerous kind.

I do consider it crazy if fear of political incorrectness through "racial profiling" prevents the police or airport security staff from taking a closer look at those who are really likely to be a threat, but I'd like the need for racial profiling to go away.

No, I'm not Charlie. I never supported the #jesuischarlie movement. As a blogger, I value the freedom of speech (which is why I hate political correctness), but there must be respect. Charlie Hebdo blatantly and unnecessarily did things and continues to do things that hurt the religious feelings of millions, if not billions, of people. That doesn't justify an attack, but they provoked it. The French policeman of Arab descent and Muslim faith who was shot outside the Charlie Hebdo building is the victim whose fate really made me sad because he wasn't there by his choice.

Politics is a pendulum. It swings in one direction, then in another. Terrible mistakes of recent years and decades must now be corrected, and that's better than doing too little, too late. There are high-profile issues, such as the ones Mr. Trump focuses on, and there are others, such as the broken U.S. patent system. Come November, many things may change.