Yesterday, Apple's antitrust lawsuit in the Northern District of California against certain Nokia privateers (patent assertion entities that Nokia has fed with patents) became known. Then, Nokia announced its new wave of patent infringement suits against Apple. And I have now just found something very interesting in a court filing of the usually rather uninspiring kind: Apple has added Nokia Corporation, Nokia Solutions and Networks Oy (using a Texas address) and Nokia Technologies Oy to the defendants in its antitrust case. Here's the relevant part of the list of defendants (click on the image to enlarge; this post continues below the image): 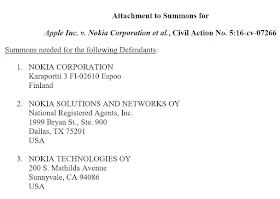 What has happened procedurally is that the court rejected this proposed summons because it lists defendants not listed in the complaint. But that's just a clerical thing: no doubt Apple will amend the complaint accordingly. Apple's lead counsel, Wilmer Hale's Mark Selwyn, who is also a key player in Apple's protracted dispute with Samsung, has faced greater logistical challenges.

While the original complaint targeted Nokia in practical terms, it does make a difference that Apple decided, apparently in response to Nokia's patent infringement suits, to add three Nokia entities to the list of defendants. I can attribute it only to diplomatic considerations that Apple didn't do this initially. If you sue over an alleged conspiracy (the term itself is in the complaint, it makes sense to go after all conspirators, not just after some.

There's quite some escalation going on: a couple of hours ago, Nokia announced the filing of further complaints against Apple. The most notable changes are that Nokia has also filed an ITC complaint, seeking a U.S. import ban over eight patents, and that it's suing in nine more countries. Last time Apple and Nokia met at the ITC, neither made a lot of headway there; it turned out to be a patent graveyard. In addition to the U.S. (Eastern District of Texas, with a total of 18 patents in play, including H.264 video codec patents) and Germany (eight patents in Düsseldorf, four in Mannheim, and two in Munich, where the first hearings in this new dispute will likely take place in March or April), Nokia is now also asserting three patents in Helsinki, Finland; three patents in London; four in Turin, Italy; three in Stockholm, Sweden; one in Barcelona, Spain; three in The Hague, Netherlands; one in Paris, France;one in Hong Kong, China; and one in Tokyo, Japan.

According to Nokia's press release, there are 40 patents-in-suit, meaning that some patents are being asserted in more than one jurisdiction.

I watched Nokia's patent assertions against HTC a few years ago. There was significant escalation, but it took longer than one day. After more than a year and a half of litigation, that dispute spanned seven countries on three continents. With Apple, it took one day to go from two countries to eleven.

With HTC, this strategy paid off, and it was necessary since most of Nokia's patent assertions either failed or resulted in symbolic wins without commercial impact. I believe that what carried the day for Nokia in the end was that certain patents covered hardware designs and HTC suppliers Qualcomm and Broadcom couldn't easily have worked around them, at least not without cost implications. HTC did a very good job defending itself, but Apple will probably do an even better one and it will simply get more support from its chipset suppliers if it needs workarounds, simply because no one will want to lose Apple's business.

Nokia may find that it's barking up the wrong tree. This all-out war and global carpetbombing will probably not sit well with Cupertino. Normally Apple is willing to pay royalties and move on. Its dispute with Ericsson is an example. But Apple is ready, willing and able to litigate for years if it feels it has to. Nokia's decision-makers may believe that "brute force" is the way to get Apple to pay up quickly, but this approach may backfire. What if Apple now decides to prove that it can defeat one Nokia patent infringement claim after the other and get one Nokia patent after the other invalidated? Should that happen, Nokia will have to wait for its payday much longer than it might have thought. Its portfolio might be devalued in the end. And the return might be quite a disappointment. On top of all of that, Nokia risks being held to be an antitrust violator. There is considerable risk to the failed Finnish device maker.

Talking about antitrust, the U.S. lawsuit against Nokia's privateering could also, with or without a formal EU complaint by Apple, lead the European Commission to investigate Nokia. Commissioner Vestager will have to take some serious action against European tech companies for the sake of at least appearing to be more balanced than one would think based on her current focus on Apple, Google, and Facebook.

As for Nokia's chances of getting leverage over Apple, injunctions will be way more important than damages, but they'll be hard to come by. In the U.S. it's pretty hard to obtain an injunction over any patent. In Germany and some other European jurisdictions, injunctive relief is a legal remedy for infringement, but if a patent is standard-essential, special rules apply (after the CJEU's Huawei v. ZTE opinion), and if it isn't standard-essential, it can be worked around.

Today's announcement by Nokia shows how much of a troll it has become. Ericsson is not as bad as Nokia, but not fundamentally better. And the European Commission's innovation policy comes down to ridiculous claims, unrealistic plans, and in some cases rather questionable regulatory action.

As for Nokia's transformation into a troll, it's very telling that Nokia used to prefer the District of Delaware as long as it was a mobile device maker itself. Nowadays, it prefers the Eastern District of Texas. Sic transit gloria mundi.