There we go again. For the fourth time in six years (minus a few months), Apple and Samsung will square off again, starting today, in the San Jose building of the United States District Court for the Northern District of California. It's the third trial in the first Apple v. Samsung case (the related complaint was filed in April 2011) and the fourth in total (if we add the 2014 trial in the second case, filed in 2012).

Via Twitter I provided the parties with a link to the Guinness Book of Records website. This might be a new record: four trials between the same two parties in one federal district court within less than six years.

In some ways, it's déjà vu all over again, or Groundhog Day, as Korean-American Judge Lucy H. Koh calls it. But not in all ways. Samsung scored a major victory in the Supreme Court in 2016 on what should be considered the appropriate article of manufacture for determining design patent damages in the form of a disgorgement of unapportioned infringer's profits under 35 U.S.C. § 289. Apple had been awarded huge amounts at two previous trials, based on a standard overthrown by the highest court in the land. Now it will be up to a jury whether the ultimate outcome will, or will not, be reflective of Samsung's SCOTUS victory.

There's the legal part, which is a test that the U.S. government laid out in an amicus curiae brief filed with the Supreme Court. That one is suboptimal, and people far more qualified than me to discuss design patent law find it wanting. There are various restrictions on the parties, especially on Samsung, as to what kind of evidence and testimony they're allowed to present and what kinds of argument they're allowed to raise. And what may ultimately decide is psychology: whether the jury will, or will not, buy Apple's portrayal of Samsung as a copyist.

It's impossible to go into full detail here on all these questions, but let's take a quick look at a few of them. My loyal readers know that I like both Apple and Samsung much better when they're defending themselves against patent infringement allegations and overreaching remedies than when they're playing the offensive part.

Over the years I've had a handful of different iPhones and Samsung Galaxy phones. It's true that the earliest Galaxy products looked much more similar to the iPhone than later ones do. That's why this re-retrial is about old products. A blast from the past.

Apple will argue that Samsung's phones had a rather different look prior to the iPhone launch than subsequently to it (and will point to that old "crisis of design" email):

On the left side one can see that those older phones usually had physical keyboards. While it's true that early Galaxy S phones looked more iPhone-like, what had happened in between was that Android came out, Samsung adopted it, and physical keyboards were history. But in none of those trials did Samsung get the chance to make its strongest defensive point--nor it will it get it this week. Even before the iPhone, Samsung's designers had created some touchscreen phone designs that had various visual elements that are now considered "iPhone-like": 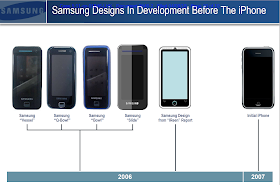 Even if--just for the sake of the argument--one agreed with Apple that Samsung was a copyist, had a major benefit from it (relative to other Android device makers such as Motorola and HTC, not vis-à-vis Apple), and should pay the price, that still doesn't mean that a draconian remedy--disgorgement of entire profits--is a fair and just outcome.

Fairness would require new legislation. § 289 would have to be amended in order to allow apportionment. Then we could have a rational conversation about the extent to which a particular device maker's success depends on certain designs or, more accurately, certain design elements. But Congress hasn't touched that statute in ages, so the law of the land is what it is for the purposes of this trial. Faced with the choice between a devastating AoM definition that will encourage abusive litigation by others and a scenario in which Apple would get less than it deserves, but still an amount far closer to a reasonable apportionment than the "nuclear option," let's hope that jurors will mitigate the damage.

Judge Koh could have adopted a different test (set of criteria) for determining the article of manufacture. The Department of Justice is part of the executive branch of government; its positions are neither law (unless Congress likes and adopts its ideas) nor precedent.

Professor Sarah Burstein, who studied design and the law, wrote a very interesting paper last fall, published by the Harvard Journal of Law & Technology, about the "Article of Manufacture" question and proposed going back to the original definition, which excluded machines. No machine would mean "no smartphone."

Carl Cecere, an appellate attorney, authored an article for law.com. He, too, considers the adopted test a threat to patent holders and their competitors alike. Like Professor Burstein, Mr. Cecere is concerned about lay jurors having to make a determination without sufficient guidance.

Furthermore, I'd like to point to articles on law360.com and IPWatchdog.com.

But the San Jose jury will have to hand down a verdict under the chosen test. It's free to do pretty much anything. Unfortunately, it won't have as much help as it could have been given:

Jury trials are unpredictable. Apart from how much the jury's thinking may be influenced by the "copying" allegations that Samsung can't fully counter because it's not allowed to present its independent pre-iPhone designs, a lot will depend on how much weight the jury will give to the fourth factor: whether one can purchase a separate component that embodies a design. In this regard, Samsung will be able to show some evidence such as replacement parts offered on Amazon.com.