While I'm not going to reiterate my positions on copyrightability and "fair use" in connection with Oracle v. Google (I fully stand by what I've written before and which the Federal Circuit has vindicated, but don't see a point in repeating what I've been saying for so many years), it does sometimes surprise me that there is so little interest in the proceedings. The latest example is that I haven't seen any media coverage of the fact that Google is preparing a petition for a rehearing en banc (a full-court review) of Oracle's recent appellate victory (this post continues below the image): 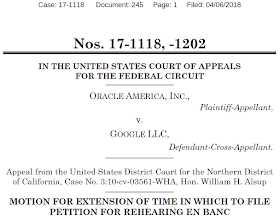 The regular deadline would have been in late April. In early April, Google asked for more time: until May 29, 2018. Oracle didn't oppose, and the Federal Circuit granted the petition.

Last time around, when the key legal question was copyrightability, Google even skipped this step and went straight to the Supreme Court (in vain). The fact that it's trying an en banc petition this time doesn't necessarily mean it's much more hopeful about its chances. Google may simply consider it safer to exhaust its options at this stage before trying another petition for writ of certiorari (request for Supreme Court review). It's like telling the Supreme Court: "We really tried everything to avoid having to file a second cert petition in the same case, but unfortunately we have to."

While I believe the Federal Circuit got both copyrightability and "fair use" perfectly right (for the reasons I stated in years past, over and over), I'd love the Supreme Court to accept to look at the matter--and, ultimately, to affirm. As an app developer I believe that would be a positive thing for the industry at large, with a few exceptions that merely prove the rule. An en banc review by the Federal Circuit--no matter the outcome--wouldn't be useful at all.