This is a follow-up to my retweet (of three days ago) of a TechRights article:

@glynmoody @FOSSpatents @zoobab The Eastern District of Texas and Patent Courts Elsewhere Are Eating Huawei, But Huawei Also Uses These US Patent Courts to Prey on Its Competitors Outside China https://t.co/LCqF9l15ZP

Just at a time when Huawei is trying to prove Samsung's infringement of some of its SEPs in court (and seeking a whopping 1.5% royalty), a group of three affiliated non-practicing entities (Optis Wireless Technology, Optis Cellular Technology, and Panoptis Patent Management) has prevailed over Huawei in the United States District Court for the Eastern District of Texas on all five patents-in-suit: four FRAND-pledged wireless SEPS and one non-FRAND-pledged (but potentially still essential) H.264 codec patent. And the jury awarded a total of $10.6 million, with each of the four FRAND-committed patents, however, accounting for only an average of approximately $0.7 million. In other words, the non-FRAND patent was deemed roughly ten times more valuable. While it's theoretically possible that the non-FRAND H.264 patent was considered more valuable for technical reasons than the FRAND-pledged wireless SEPs, Judge Rodney Gilstrap, the nation's busiest patent judge in recent history, had instructed the jury that the FRAND promise needed to be kept in mind when determining damages.

This is the damages section of the verdict form (click to enlarge; this post continues below the image): 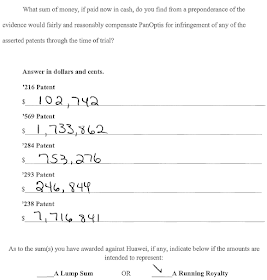 Most of the Optis/Panoptis patents-in-suit were transferred to that entity by Ericsson--a practice that is called "privateering" and that this blog has frequently criticized over the years. A former Ericsson executive runs Optis/Panoptis, and McKool Smith, the rising-star litigation firm representing Optis/Panoptis, frequently litigates patents on Ericsson's behalf.

Ericsson and Huawei had a dispute years ago. Apparently Ericsson came under serious pressure in China and more or less backed out (a face-saving exit at best). But Ericsson's privateers are still going after Huawei.

Huawei has yet to prevail on the merits in its dispute with Samsung. Same with Qualcomm in its dispute with Apple. Those two companies (who are at loggerheads with each other, yet have somewhat similar patent enforcement strategies) are demanding many billions of dollars before establishing the infringement of a single valid patent.

For all owners of wireless SEPs seeking to enforce them (also including Huawei when the shoe is on the other foot, and Qualcomm), every decision (here, a jury verdict) that awards only a modest amount of damages/royalties is bad news. Huawei has a significant U.S. market share, and if its infringement of four wireless FRAND-pledgedd SEPs just entitles a patent holder to about 700 grand per patent, it's hard to see how Huawei could demand many billions from Samsung.

After this jury trial, there'll be a bench trial at which Judge Gilstrap will have to determine whether Optis/Panoptis had previously made Huawei a licensing offer on FRAND terms, which Huawei denies. This, as well as the usual post-trial motion practice seeking a reduction of damages, will force Huawei to take positions contrary to the ones it's espousing in its dispute with Samsung.

Huawei makes very good devices. I've bought some for my app development company, and it's one of two Android brands that I've repeatedly recommended to others. It would be great if Huawei's priority was its product business, in which case it should be in the FRAND camp. Its dispute with ZTE earlier this decade was more of a statement. To me it looked like Huawei wanted to demonstrate that it takes pride in its contributions to wireless innovation. But the longer its dispute with Samsung takes, the more I fear that Huawei is actually aspiring to become the next Qualcomm...

It will be interesting to watch the further proceedings in the Eastern District of Texas.