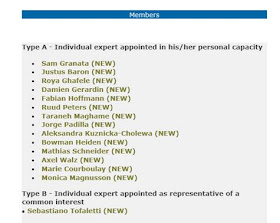 The above list was taken down shortly thereafter, but it has already drawn harsh criticism from the Brussels-based Fair Standards Alliance, an industry group that promotes transparency and fairness in SEP licensing and has been mentioned here on multiple occasions:

"The Fair Standards Alliance [has] strong concerns about the unbalanced nature of this group, and fear[s] that the outcome of the discussions in the group will negatively impact incentives to innovate for the years to come, to the detriment of European industry and consumers. Furthermore, we have significant concerns about the lack of substantial experience and significant competence within the experts group in terms of the licensing and valuation of SEPs, even though the Commission decision required 'substantial experience in licensing and/or valuation of SEPs.' In our view, the group lacks a sufficient amount of industry experts that have day-to-day expertise in the negotiations of SEP licenses. We therefore urge the Commission to reconsider its selection, in order to have a group that will be able to achieve balanced views on what are the best next steps in terms of FRAND licensing for European policy makers to consider as the industry moves towards the development of 5G and IoT."

That's a pretty strong and clear statement, and I philosophically agree with it, but I'll allow myself to be much more blunt: the composition of this group is a recipe for disaster. Given the positions that many of those people have voiced on countless other occasions, the outcome is predictable. It will be a nightmare for competition and innovation, and all SEP abusers' wet dream.

This group is not the result of responsible choices made by neutral public servants desiring the best for Europe. It looks like none other than Qualcomm put it together, with other aggressive SEP monetizers like Nokia, Ericsson and InterDigital possibly having contributed to it, and some patent radicals at DG GROW (the Directorate-General for the Internal Market, which I fought hard against in the days of my NoSoftwarePatents campaign) rubberstamped it.

The Commission website says "[t]he aim of the group is to increase expertise and know-how about the determination of fair, reasonable and non-disciminatory (FRAND) licensing terms, as well as the sound valuation of intellectual property." That is fake news, and the recommendations coming out of this in the end will certainly be fake FRAND.

To be clear, there are some very smart people with lots of SEP-related expertise among them. In particular, I have the greatest respect for Damien Geradin, a lawyer and a professor (University of Tilburg, Netherlands)--but the first time I heard him speak at a Brussels event (in the spring of 2010), a large part of his presentation was simply hardcore advocacy for Qualcomm. His Tilburg Law and Economics Center (TILEC) lists Qualcomm as its number one sponsor in its annual report (page 23 of the PDF).

[Update] Professor Geradin (one of my esteemed readers) has meanwhile told me that he has not represented Qualcomm since 2010 and has, in fact, also represented clients adverse to them. While the information about TILEC being funded by Qualcomm was accurate, Professor Geradin says his work does not benefit from Qualcomm's sponsorship, and he tells me he will approach the expert group meetings with an open mind. [/Update]

Economist Justus Baron is a researched at Northwestern University's Searle Center on Law, Regulation, and Economic Growth, which announced in 2013 that it received $2 million from Qualcomm for "patent research." The press release describes Qualcomm as a "visionary company."

Another economist, Jorge Padilla, heads Compass Lexecon Europe. Qualcomm is one of his firm's major clients (possibly the primary client), and he has written various papers on SEPs, habitually denying that hold-up and patent stacking are actual issues (actually, even this blog here has provided numerous examples over the years that those concerns are well-founded).

Ruud Peters used to head the IP department of Philips from 1999 to 2013, then became a part-time adviser. If I recall correctly, I crossed paths with him at an EIF (European Internet Forum) event in 2004. In any event, Philips is very active in SEP monetization.

Bowman Heiden of the University of Gothenburg, Sweden co-authored a paper last year on "patent holdout" that was sponsored by 4iP  Council, an organization that is in turn sponsored by Qualcomm, Philips, InterDigital, and the Qualcomm's two primary allies, Nokia and Ericsson (though both at different points in time complained about Qualcomm's aggressive leveraging of SEPs).

[Update] A reader has pointed me to Mr. Heiden's PhD thesis, for which he received financial and other support from Ericsson: "First, I would like to thank Gustav Brismark at Ericsson for introducing me to the complexity of FRAND and partially funding my research while allowing me the freedom to reach my own conclusions." [/Update]

I'm afraid DG GROW won't listen to the Fair Standards Alliance, and the set of recommendations that this group will put forward will be materially consistent with whatever Qualcomm's legal department would propose.