Eight years ago, this blog started publishing battlemaps of major smartphone patent disputes. Apple and Microsoft aren't suing Android device makers at this point, but two major disputes are ongoing: Apple and, by extension, Intel's dispute with Qualcomm, which is under fire from competition enforcers around the globe; and Huawei v. Samsung, the most massive patent clash ever between two leading Android device makers.

That's why I took the time today to draw up my first battlemap (announced in a post earlier today) in more than half a decade (click on the image to enlarge; this post continues below the document): 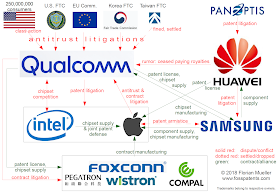 You can find the PDF version (a single-page document) on Scribd.

As the text in the bottom right corner explains, solid red lines indicate disputes or conflicts (competitive activity or activity that may lead to litigation, such as a regulator fining a company, which then appeals the decision to a court of law); dotted red lines show that there was a dispute, but it has been settled or at least the parties agreed on a ceasefire; and green lines denote partnerships or alliances (including joint defense).

If a line has only one arrow, it goes from the party that first went to court (or took similar action) to the target, regardless of whether the other party counterclaimed. For an example, whenever Huawei brought offensive patent infringement assertions against Samsung, Samsung countersued, but the history of that litigation and the parties' pleadings suggest that Samsung, which according to a recent filing suggested a zero-zero cross-license at some point, would have preferred to be left alone. It's like an offense actually representing a kind of defense.

Apple's patent infringement counterclaims against Qualcomm are a similar story, and that's just one of various parallels between Apple's approach to Qualcomm's conduct and Samsung's defenses against Huawei. And the way Huawei is dealing with (Pan)Optis Wireless, which is asserting former Ericsson patents against it, is not entirely dissimilar to Apple's and Samsung's defensive efforts either.

I could have added companies like Nokia and Ericsson to the list (beyond PanOptis, which is an Ericsson proxy, or so-called privateer), but they have license deals with the likes of Apple, Samsung, and Huawei in place anyway. So I focused on the ones that are presently party to major conflicts.

In the early part of this decade, Apple v. Samsung (just thinking of the presidential veto of an ITC import ban and the first Supreme Court ruling on design patents in well over 100 years), Apple v. Google/Motorola (especially the "Posner case" in Chicago!) and Microsoft v. Google/Motorola were the two disputes in which the most interesting things happened. Now we're approaching the end of the 2010s, and the disputes visualized by the battlemap above are the ones to watch.

Just one last comment on similarities between Apple's litigation with Qualcomm and Samsung's with Huawei: I've uploaded an Apple reply brief to Scribd that notes Qualcomm dropped its request for a global FRAND determination in the Southern District of California (though Qualcomm still wants the U.S. district court to hold that its demands were FRAND-compliant). This reminds me of Huawei recently stipulating to a dismissal (without prejudice) of a similar request. And Apple's brief quotes something Judge William H. Orrick said in Huawei v. Samsung:

"How am I to adjudicate whether those offers were FRAND, if that determination depends on valuation of global portfolios, and can only be made subsequent to finding each patent valid and essential to the standard?"

This insistence on firstly establishing the merits of someone's standard-essential patents (as opposed to rushing to rate-setting based on sheer portfolio size, regardless of whether those patents are infringed and valid, be it in a court of law or in arbitration, which patent holders typically want to take place under extremely unfair preconditions and parameters) is a common element of Apple's positions in its dispute with Qualcomm and Samsung's defense against Huawei.

At the same time, Qualcomm and Huawei, despite the fact that the latter is rumored not to be paying patent royalties anymore to the former, have been described as "more partners than rivals." I, too, sometimes refer to them collectively as "Qualwei," though I still hope Huawei will ultimately focus on its product business more so than on outbound patent licensing.

Finally, I'd like to explain the logic behind placing Apple and Intel in a rectangle that is the target of patent lawsuits brought by Qualcomm. Apart from China, all patent infringement actions pursued by Qualcomm against Apple (in the ITC and Germany) target Intel-powered smartphones, and I've seen opposition briefs Intel filed with the European Patent Office, seeking the revocation of certain patents asserted by Qualcomm against Apple--with the same patent attorneys making virtually identical filings on Apple's behalf as well. Obviously, some of Qualcomm's patent infringement claims are technically closer to Intel's baseband processor (especially several assertions accusing a Qorvo envelope tracker of infringement) than others, a threshold question that the German judges presiding over multiple Qualcomm v. Apple cases in Munich and Mannheim are particularly interested in.