The Federal Trade Commission just submitted to the United States District Court for the Northern District of California its witness list for Day 4 of the FTC v. Qualcomm antitrust trial (Friday, January 11, 2019). In terms of what she says and how she says it, the real star witness at this trial has been Intel's Aicha Evans so far, and her unconventional but incredibly strong testimony will resume on Friday morning. With her personality she's a witness unlike any other you'll see in your life, and I'll talk about some of what she said in other posts later today. But in terms of sheer power, the superstar witness here is going to be Qualcomm CEO Steve Mollenkopf (this post continues below the image): 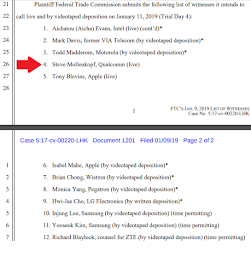 Mr. Mollenkopf has been with Qualcomm for more than 24 years and its CEO since 2014.

The number two executive, Qualcomm president Cristiano Amon, testified yesterday. Due to the nature of the questions asked, his testimony didn't reveal anything unexpected, though he seemed more cooperative than some other Qualcomm witnesses.

Mr. Mollenkopf's testimony on Friday will likely result in increased media attention to the trial. The court may even need to make use of the overflow room.

The issues in the FTC case will dictate the scope and focus of the questions asked, so we won't get to hear his response to Apple CEO Tim Cook's CNBC interview on Friday, according to which Apple has not had any settlement discussions with Qualcomm since the third calendar quarter of last year, contrary to representations by Qualcomm at all levels--also by Mr. Mollenkopf personally--that a settlement was near. Qualcomm's CEO may very well talk about past encounters with Mr. Cook, however, provided that Qualcomm's past relationship with Apple is on the agenda for his Friday testimony.