According to the following tweet by a Financial Times reporter, the center-left S&D group in the European Parliament has decided to vote in favor of Article 13 of the EU copyright reform bill (this post continues below the tweet):

However, each MEP will be free to vote for or against anything. This week the political groups are just preparing their official recommendations, and given that the current version of the copyright bill resulted from a "trilogue" (interinstitutional negotiations between EU Council, European Commission and European Parliament), it's normal that the major political groups in the EP officially recommend to their MEPs that they vote in favor. That said, there definitely is a problem because southern European center-left parties are inclined to support the bill.

Comparing the current situation to the one we faced in 2005 before the plenary vote on software patents, there's certainly a wider gap now. However, there will be massive protests on Saturday. In my previous post I provided a list of demonstrations (which has even grown since) and mentioned that I'm going to be one of the speakers at the Munich demonstration. Should those demonstrations have major impact, then there's still a chance that Merkel's Christian Democratic Union (CDU) and its Bavarian sister party (Christian Social Union, CSU) may prefer to avoid holding a vote so shortly before EU elections in May.

The CDU and CSU delegation to the European Parliament has embarrassed and disqualified itself to the extent that no citizen could possibly trust them to understand the issues in the slightest. There are people in the CDU and CSU with a far better grasp of digital policy issues, but they're active in national politics, not in the European Parliament.

The CDU/CSU (technically two parties, practically just one) is the largest political party in the largest EU economy. This is the leading German government party, and they're the most powerful party within the European People's Party (EPP), which in turn is the most powerful political group in the European Parliament. The current EPP chairman, Manfred Weber, is a CSU politician; his predecessor was a German-speaking Alsatian Frenchman, whose predecessor was a CDU politician (Hans-Gert Pöttering). That family of parties wields a big stick in EU politics, and a CDU MEP, Axel Voss, is the EU Parliament's rapporteur on the controversial copyright directive.

As I mentioned in my previous post, I actually have a lot of compassion for what he's going through. I, too, have faced shitstorms because of pro-copyright positions I took in connection with Oracle v. Google (which were later validated by the Federal Circuit), but at least I wasn't threatened in that context (that happened to me, too, but because of my opposition to Oracle's acquisiton of Sun Microsystems).

What I can't help but conclude, however, is that Mr. Voss doesn't understand the inner workings of the Internet well enough to realize what kinds of problems "his" Article 13 is going to cause in practice. The unbelievably stupid tweet by his party's EP delegation that the headline mentions was issued in Mr. Voss's defense can only be understood in its specific context. And that context starts with an interview Mr. Voss gave to the German edition of Vice.com. I'll translate the key passage here, which is related to the risk of content "overblocking" by platforms:

"With a view to technical solutions our position is: yes, it may be that something gets blocked that shouldn't be. It's a safe assumption it won't work 100%. I'm not an engineer and can't explain to you whether [filters] can really identify remixes correctly. But on Google there's also that page where you can click on memes--an actual section." (emhasis added)

Article 13 doesn't mention filters, but high-traffic platforms can't practically meet its requirements without, at least not based on the wording of the directive itself (national implementations are a bridge that we'll cross when we get there). At the same time, Article 13 seeks to allow memes, remixes, parody, satire etc.--but as Mr. Voss conceded, automatic filters may end up overblocking.

The sentence I highlighted above means to say that Google is, in Mr. Voss's observation, capable of electronically identifying memes.

But while Google has special search modes (which one might compare to sections of a newspaper or magazine) for News, Images, Videos etc., memes aren't an "actual section" as Mr. Voss told Vice. "Memes" is merely one of literally (!) millions (across all languages) of keywords that Google identifies. If you find a keyword in an index of a book, it's just a keyword--and not the equivalent of a chapter.

Given that Google doesn't provide a memes "section," German social democratic MEP Tiemo Woelken ("Wölken" in German) raised a legitimate question on Twitter earlier today. My translation: "I've just been looking for a #memes section on #google. Has anyone found it? #Article13"

Instead of Mr. Voss graciously conceding that he had confused a keyword for a section, his party's delegation to the European Parliament rushed to his defense a few hours later with the most stupid tweet I've seen so far in connection with Article 13. Since they might recognize how foolish that tweet was and remove it then, here's a screenshot (click on the image to enlarge; this post continues below the screenshot with an English translation and further commentary): 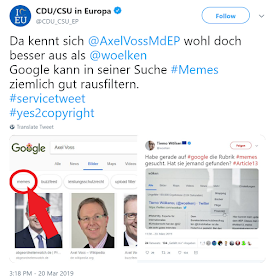 "It seems @AxelVossMdEP is actually more knowledgeable on this than @woelken

What you can see even on their screenshot is that "memes" is listed there as a keyword at a level with "buzzfeed", "leistungsschutzrecht" (= press publisher's right for news headlines), and "upload filter."

But the worst part is that the CDU/CSU chose to dig itself an even deeper hole by now claiming explicitly that Google's search engine can tell memes from other images that might have to be blocked by upload filters over fears of infringing someone's copyright. That is, of course, what Mr. Voss also meant in that Vice interview. The CDU/CSU delegation's tweet just makes it unmistakably clear how incompetent those guys are.

An upload filter would have to--and in the foreseeable future, even with Artifical Intelligence, won't be able to--tell a meme from an infringing use of someone else's copyrighted picture. That is a substantive question that one could spend hours in court debating--per image. And in many cases, even reasonable people might disagree on whether the text someone put on an image is creative enough for the derivative work to constitute a "meme" that should be in the clear. It's technically far easier for the computer to recognize a substantial overlap between the bitmaps of the two images (the meme and the original photo), and on that basis it would have to err on the side of caution and block the upload.

Google's "meme" keyword is not based on any "fair use"-style judgment. It's not like Google's software could reasonably reliably clear memes without overblocking. Instead, one can see with a limited number of clicks that Google attaches the keyword to certain images simply because of the word "meme" or íts plural showing up close to the image. Here's a screenshot of about a dozen results I got when searching for "Axel Voss" (as the CDU/CSU delegation did in its moronic tweet) in the Google "Images" section (click on the image to enlarge; this post continues below the screenshot with further analysis):

My screenshot makes it even clearer that "meme" is just a keyword. For "axel voss" Google also lists terms like "internet", "european parliament," or "celebrated."

But the most important thing is that all those images are on pages that contain the letters "meme" in their URL and/or on the related page:

This takes us full circle back to the upload-filter issue. An upload filter, especially in a situation where the only recommendation the layers could make is to err on the side of caution, couldn't rely on file names, subtitles, headlines, or other text found in the vicinity of an image. Otherwise end users could commit any kind of infringement by simply adding the word "meme" to a file name, a URL, an invisible tag, or by mentioning it somewhere on a web page, and the filter would have to accept everything on that basis.

Google's keyword search can live with false positives for a keyword like "meme." An upload filter could not rely on keywords because users would find out very quickly about such loopholes, tell each other about this on the Internet, and the whole filter would become useless.

The CDU/CSU delegation to the European Parliament is undoubtedly clueless as to how computer software like Google's search engine arrives at its results. That's why Article 13 imposes requirements and obligations that no existing technology can possibly meet. But there is a high risk of a majority of MEPs rubberstamping something that's going to be unworkable. MEPs would be well advised to heed the reasonable concerns voiced by critics of Article 13. Even if one doesn't necessarily have to agree with all of them, there really are serious issues, and the problem is just that the EU with its well-known, longstanding democratic deficit is on the wrong track.