Generally, the UK enjoys an excellent reputation as a jurisdiction for patent infringement and validity cases. But no UK patent ruling has ever been even remotely as controversial as Justice Colin Birss's 2017 holding in Unwired Planet v. Huawei that an injunction should issue against an implementer of a standard-essential patent (SEP) who declines to take a global portfolio license from a patent holder (in this case, a privateer asserting mostly former Ericsson patents). Justice Birss's fundamentally flawed thinking was that only because SEP holders and SEP implementers in practice typically agree on worldwide portfolio licenses, Huawei was an unwilling licensee because it refused to take a worldwide portfolio license in order to avert a UK injunction over a single SEP deemed valid and infringed--never mind that Huawei generates only a tiny percentage of its global sales (maybe 1% or so) in the UK.

There's nothing wrong with companies agreeing on all sorts of things voluntarily. The problem here is that Justice Birss's approach would effectively force companies (unless they can just forego UK revenues for some time) to let a UK court set a global FRAND rate (in order to determine whether a company is or is not a willing licensee). Under that line of reasoning, UK courts would assume jurisdiction over, U.S., German or even Vietnamese patents, without being equipped to actually assess whether the courts in those jurisdictions would, under applicable national law, deem a given patent valid and infringed (or what they would consider a FRAND royalty under their antitrust or contract laws).

While the name of the England & Wales High Court (EWHC) suggests otherwise, it's actually the lowest court for UK patent cases. But, shockingly, the Court of Appeal of England & Wales upheld Justice Birss's global FRAND determination in October 2018.

Huawei filed a petition to appeal with the Supreme Court of the United Kingdom. Such a PTA is the same in the UK as a petition for writ of certiorari (colloquially, "cert petition") filed with the U.S. Supreme Court. It's not a given that the highest court of the land will take a look at a case.

In this particular case, I was very optimistic, simply because the question of extraterritorial jurisdiction is the proverbial issue for a country's top court to consider. And indeed, on April 11, the Supreme Court of the UK granted Huawei's petition, as the court's press office confirmed to me today (click on the image to enlarge; this post continues below the image): 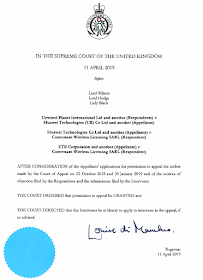 The really important issue here is the one that first came up in Unwired Planet v. Huawei. But the Supreme Court of the UK decided, for good reason, to treat the Conversant Wireless cases (defendants: Huawei and ZTE) as related cases for the purposes of a Supreme Court review. The whole package has now been granted cert.

About a week before the Supreme Court of the UK made this decision, a former judge of the UK Court of Appeal who has meanwhile been appointed to the UK Supreme Court, Lord Kitchin, defended the decisions of the two lower courts at a Munich conference (where Judge James L. Robart of the United States District Court for the Western District of Washington noted that U.S. courts simply don't rule on foreign patents, citing one case in which a U.S. district court declined to do so even though both parties asked for a determination involving a foreign patent.

Lord Kitchin is not among the three Supreme Court judges hearing the case now. Chances are, however, that the "evangelism" he conducted at the Munich conference may also take place in London, in whatever shape or form.

The Supreme Court will likely hold a hearing in the fourth quarter.

I'm going to follow the Supreme Court proceedings closely and will also try to attend the hearing. This is about an extremely important FRAND-related issue. I hope the UK, as a patent jurisdiction, will regain everyone's total respect when all is said and done in this context.